LinkedIn has released a product that it hopes will expedite its vision of creating “economic opportunity for every member of the global workforce, which is north of 3 billion people.” On Thursday, the professional social network launched LinkedIn Learning, the result of an integration of its economic graph with its Lynda.com acquisition.

It was also revealed that LinkedIn will soon release a redesigned desktop experience that’s on par with its mobile app, update its News Feed, and make messaging more intelligent (basically, bots are coming).

Last April, LinkedIn spent $1.5 billion to purchase Lynda.com, but for more than a year, the online education company remained as a standalone entity. However, that’s all changing with the launch of LinkedIn Learning. But let’s be clear: Nothing is changing with the Lynda.com experience — Lynda.com will remain online for a while, according to a company spokesperson. What LinkedIn is doing is simply copying the education service and meshing it with its data so that you can learn new skills based on jobs you are interested in — without leaving LinkedIn’s platform. 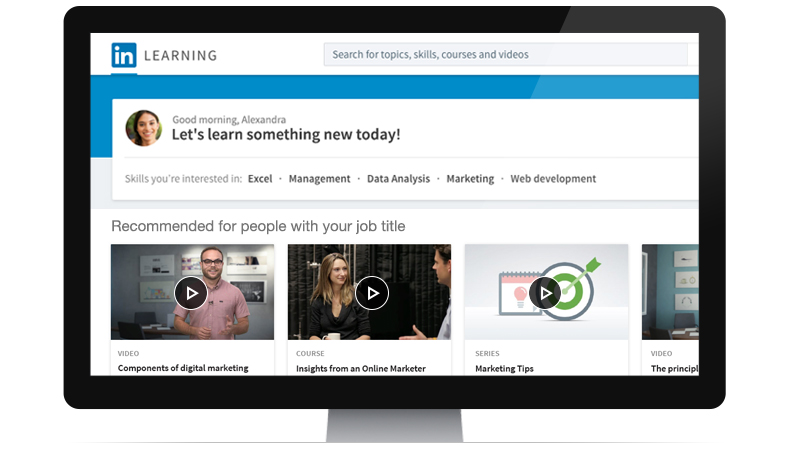 As with Lynda.com, LinkedIn Learning supports Learning Paths, which lays out the courses needed to land the job of your dreams. The service will also show you aggregate info about people who have taken the course — their job titles and other skills — so you’ll be better informed about the steps to take after completing your training. This is one of the benefits of LinkedIn’s economic graph, something that the company has touted for years.

Courses can be recommended to other users — I can send anyone I’m connected with a course on HTML5, photography, or even project management. Those involved in professional development in the workplace can also assign courses to their office colleagues, and LinkedIn Learning will place those courses in a curated section.

The goal of LinkedIn Learning is to ensure that people are always up-to-date on new skills and have a good sense of how to use those skills to advance their career.

LinkedIn Learning costs $30 per month, but those with a premium subscription to LinkedIn will get the service automatically. In the future, the company will open up an enterprise option that supports multi-person licensing.

The company has also revealed that “coming soon” (specific dates were not shared), an updated LinkedIn.com experience will be released that is “cleaner, simpler, and more intuitive.”  The update will be available to the company’s 450 million members and will come nearly a year after the company revamped its mobile app.

LinkedIn’s News Feed is also getting an upgrade, with an algorithm to surface relevant content that’s published and shared to the social network. Coming soon will be a new feed — based around users’ interests — that surfaces newsworthy items about Uber’s self-driving cars in Pittsburgh, the rise of chatbots in Facebook Messenger, or innovations in artificial intelligence, like Salesforce Einstein.

And speaking of chatbots, LinkedIn is toying around with these mini applications to see how they fit in. Over time, members will have access to an “assistant” that can help schedule appointments, send messages via Siri in iOS 10, place information on a calendar, offer additional context (think Rapportive), and much more. This is only the beginning of the company’s foray into the world of bots, and there are no plans to open the messaging service to third-party developers any time soon. However, LinkedIn chief executive Jeff Weiner remarked that additional innovations could be made under LinkedIn’s new ownership.

Today’s news comes as the company pushes forward to close its acquisition by Microsoft. Unsurprisingly, LinkedIn had very few words to say on the matter, as the deal is still being finalized.