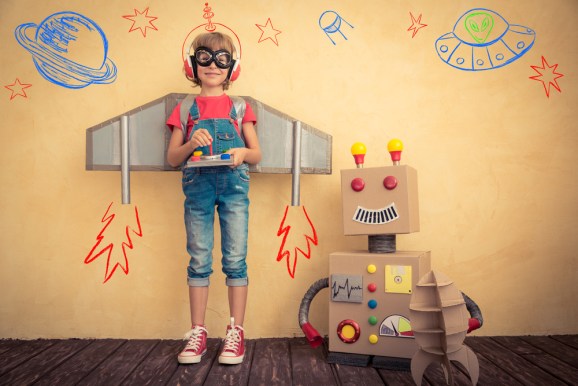 Is your bot smarter than this kid?

Humans have been interested in building intelligent computer systems since the beginning of computing technology. There’s something both interesting and strange about mimicking the function of a human brain that we feel the need to explore — how crazy is it to build a machine that can beat out the human brain in a game of chess?

Of course, as applied to today’s chatbots, artificial intelligence is still in its infancy. But don’t take that the wrong way: Today’s bots can still offer a great deal of utility for businesses and consumers. Messaging platforms like Facebook Messenger, WeChat, and Kik are making it easier than ever for brands and businesses to have a presence where millions of users are already spending time. And for users, today’s chatbots, when done right, offer up a more convenient way to find information and perform some basic transactions on the messaging platforms they’re already using.

That said, the most exciting thing about the opportunity is to understand that the experiences we as developers can create today — while in many ways satisfying and useful — are only going to get richer, more personal, and more rewarding as A.I. advances and the bot platforms mature.

Recent years have seen a lot of progress in the field of A.I., and the market is expected to grow to $5.05 billion by 2020. Qualities like natural language processing, voice recognition, automatic speech recognition, and question and intent analysis are components that will eventually lead to brands building smarter bots that can offer more sophisticated — and human-like — digital experiences for their customers.

To help frame where bots are today and where we’re headed, we’ve broken bot intelligence down into a paradigm we’re all familiar with: school.

We would consider most of today’s chatbots to be at the kindergarten level — only capable of answering very specific and predetermined questions or identifying a set of keywords. That, or the bot operates in a question and answer format where the user interface shows buttons providing choices for the flow of the chat. Because these bots rely on a basic if/then style logic, they can’t handle unplanned paths or predict outcomes.

For example, Nordstrom’s chatbot curates purchase suggestions based on items the user has browsed or purchased in the past. With each suggested item, there are three options: to buy the item, to see similar items, or to ask the bot a question. Based on what is selected, the bot will adjust the content in its feed.

This type of bot, while useful, cannot adapt to more advanced requests. More complex requests become confusing, and the bot will likely spit out a message offering the specific structure in which the request must be written.

Skype is home to a number of grade-school level bots like the “super-powered travel assistant” called Hipmunk. Tell Hipmunk to “find me cheap flights to San Francisco” and it’ll provide a list of travel options quickly and without the confusion that a kindergarten level bot may encounter when it doesn’t understand the grammar of the request.

That said, like bots at the kindergarten level, these grade school bots don’t have access to phone data beyond the information held in the specific application that houses the bot. Without phone data, a bot lacks the contextual information that would make them able to problem-solve or engage in more personalized interactions.

Bots with a bachelor’s degree

To get to college level, bots need access to data beyond the app in which they live to understand user context. This is where today’s personal assistants enter the picture, and where chatbots of tomorrow may be headed, provided they’re able to “see” beyond the silo of an application. The new Google Assistant in Allo, Apple’s Siri, and Amazon’s Alexa are able to integrate with a growing number of apps as well as the global data on the device, which allows for a larger knowledge base and the ability to offer more detailed information to the user.

At this level, requests don’t necessarily have to follow a specific format. While less educated bots living on messaging platforms can’t recognize changes in syntax, if you ask Siri “what time is sunset today?” or “when does the sun set?” she’s likely to give the same correct answer.

College-level bots and assistants also give us a tantalizing glimpse of what they could be in the future. As the level of accessible information grows, so do their capabilities.

Many believe the greatest skill you can when you leave college is the ability to learn. This, as it turns out, is also the foundation of true artificial intelligence.

Companies like Amazon and Google are making serious steps toward true AI — Amazon reportedly has more than 1,000 engineers dedicated to making Alexa smarter, and Google is approaching A.I. from a variety of angles. The search company recently purchased Api.ai, a startup focused on natural language processing, and it is also spearheading projects like DeepMind, which recently made significant headway in speech synthesis. There are also handfuls of A.I. startups trying to create bots that learn in a similar way to how humans learn. Combine learning with a high IQ and high emotional intelligence, and we’ll start to see more human-like bots opening doors to new capabilities and uses.

We’re likely years away from this level of intelligence being deployed into mainstream chatbots, but no doubt it’s on its way. And there’s no better time for companies and brands to consider how they can use today’s and tomorrow’s chatbot technology to connect with their customers.