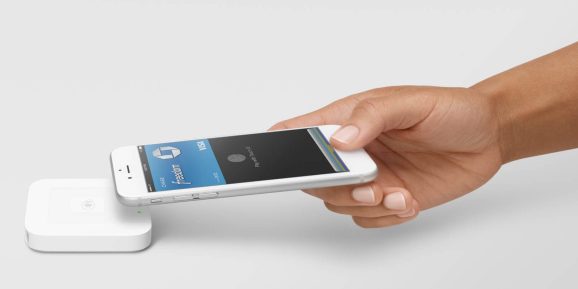 Apple Pay is shown in use with Square's contactless card reader, which also supports Google Pay.

Square has released an update to its contactless and chip reader to expedite the speed at which transactions are processed. The software, which previously clocked in at 5.7 seconds, has been fine-tuned, and the company says the time between when a customer inserts their card and when the payment is complete is now 4.2 seconds, a 25 percent difference.

It’s likely that you won’t notice the 1.5-second change, and this update may not seem significant, but every second counts. “Consumers and business owners alike loathe waiting for chip cards to process. And we, at Square, feel the same,” said Jesse Dorogusker, the company’s hardware lead.

To put the speed into context, in a test done by The Wall Street Journal, on average, it took 13 seconds to pay with a chip card. Perhaps it’s because EMVs are new to the U.S., and therefore additional resources are required to expedite the process, but many wonder how long customers will be patient. Square promises that this update makes its version of the technology much faster than any others in the market.

Square began rolling out its contactless and chip reader in November 2015 in response to a liability shift for card payments in the U.S. The ruling stated that liability for fraudulent transactions would be passed on to the merchant if EMV chip-enabled devices and applications weren’t used to process that payment. But rather than just giving merchants a new credit card reader, Square also added support for NFC payments, including Apple Pay.

The company shared that it has received 500,000 orders for its new card reader, to date.

In May, the commerce company announced a leasing program that lets merchants use the reader for $1 per week. This was done to reduce the “financial strain” business owners may have felt in purchasing the $49 contactless and chip reader from a store or online.

The latest firmware update will be installed automatically, so merchants don’t have to do anything.