With the global PC market seemingly in perpetual decline, one could be forgiven for thinking that the desktop computer accessory market would be well on its way to oblivion. Well, not according to Logitech.

In the past six months alone, the Swiss peripheral producer has brought new mechanical keyboards to market, new headphones, a fresh mouse product line, and a new HD webcam for livestreaming. However, a big focus for these products has been the gaming fraternity. For the broader consumer market, the company has been working on products that aren’t built purely for PCs, but are adaptable for the multi-device toting user of 2016.

The aptly named Logitech K780 Multi-Device keyboard, like many others on the market, is able to connect to any number of Bluetooth-enabled devices through pairing. But what Logitech’s incarnation strives for is to make the process of working across multiple devices as seamless and smooth as possible.

The $80 unit is designed to work with Windows, Mac, Android, iOS, and Chrome OS machines. It was introduced to the EMEA (Europe, Middle East, and Africa) market back in June, and it was finally launched in North America a couple of weeks back. VentureBeat has gotten its proverbial hands on one of these puppies to see what it’s capable of, and whether it really lives up to its promise of making multi-device workstations more productive.

The K780 represents an upgrade of sorts to the K380 it launched last year, but the two devices are sufficiently different to merit a closer look this time around. First up, the K780 sports a cradle to house your tablet and mobile phone, the idea being that if you’re working on your PC and you need to quickly switch to typing a message on your mobile device, you can do so without having to lay a finger on a phone or tablet.

In addition to the cradle, the K780 is also a full-featured desktop keyboard compared to the K380, which was more designed as a lightweight mobile keyboard that can be taken on the road. The K780 has a number keypad on the right, which hints that this is designed as a desktop keyboard primarily, with the added bonus of being able to work with multiple devices.

Cradles and number pads are all well and good, but digging down into the inner workings of the K780 is where things get interesting. Of course any Bluetooth keyboard is capable of working with multiple devices, but it is a real pain having to connect and reconnect as you switch between them. And this is why the K780 leans on the smarts of Bluetooth LE, meaning you can switch devices on a whim by hitting one of three buttons.

Along the top left row, next to the ESC key, you’ll see three big white keys numbered 1, 2, and 3 (these also double as the F1, F2, and F3 keys). To associate a device with one of these keys, you hold the key down for 3 seconds until the button flashes, then you connect the device through the usual Bluetooth settings on your mobile contraption.

In my case, button 1 was associated with my laptop, button 2 an iPad, and button 3 an old iPhone I had lying around. Unfortunately, because my main Android phone isn’t Bluetooth LE-compatible, it wouldn’t work with the K780. However, most of the flagship Android phones (and iPhones) work with Bluetooth LE, so it shouldn’t be a problem for most prospective buyers.

Assuming your setup to be something similar to the image below, you’d hit button one to type on your computer screen, then tap button 2 to answer an email on your iPad, and then deftly hit button 3 to reply to that WhatsApp message. And repeat. 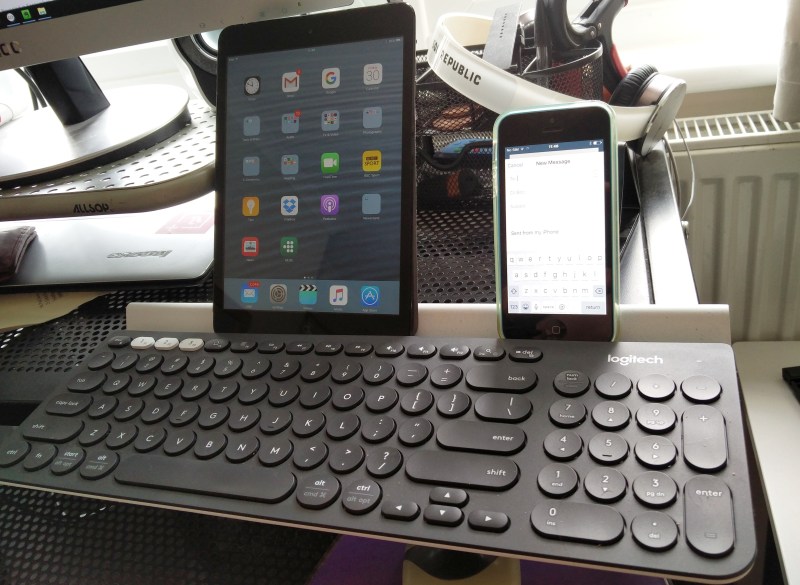 After using the K780 for a couple of days, I picked up on two minor downsides, though they were far from deal-breakers. First, there were no lights on the keyboard to indicate that the Caps Lock or Num Lock buttons were activated. For many people, that will be a massive “so what?,” but I find it helpful, when typing in password fields, for example, to have the instant visual cue of a light to tell you that your Caps Lock is on. We asked Art O Gnimh, global director of keyboards at Logitech, why there are no lights, and it turns out that it was a simple design decision — there are already physical lights on the three Easy-Switch buttons, plus one for the power/battery life indicator. In short, Logitech didn’t want to overload the keyboard with too many lights.

It’s also worth noting here that Logitech offers downloadable Options software, which brings alerts to your screen, including Caps Lock and Num Lock. This software also lets you customize keyboard buttons, including shortcuts, which leads us to the second minor issue.

Out of the box, there is no obvious way of knowing some of the keyboard shortcuts. For example, the K780 doesn’t have a dedicated print-screen button, so I was totally flummoxed as to how to grab a screenshot on my PC. Turns out you can hit “FN + Del” to do so, but who would’ve known?

I’d argue that such keyboard shortcuts should be mapped out in the box, either as a pull-out pamphlet or printed on the underside of the box. What is in the box is a hint that you can go online to find a PDF document (user manual). Upon doing so, I discovered that this document includes enhanced functions, such as shortcuts, hot keys, and media keys. I’ve included these for your perusal below. 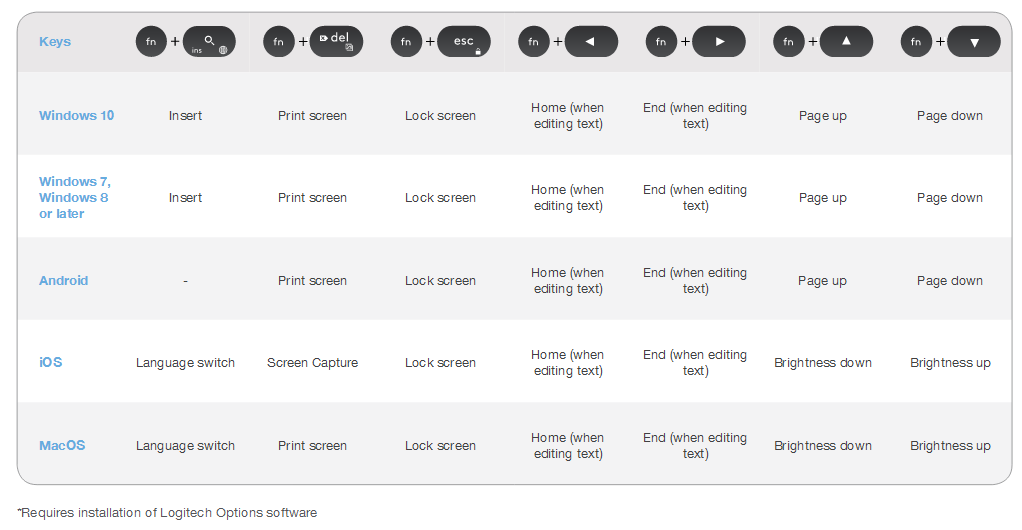 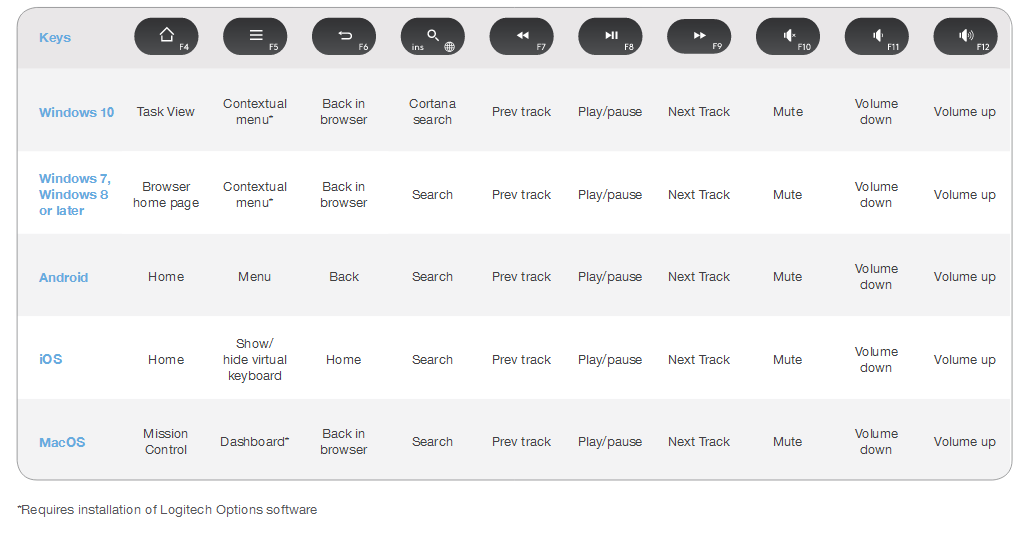 If you can forgive these really quite minor quibbles, then what we have here is a near-perfect multi-purpose keyboard.

Some other points worth noting here. Many of the K780 key combinations that work on a PC also work on mobile devices — for example, “Alt + Tab” which I use to switch between applications on Windows, is the same combination I use to switch between apps on my iPad. Similarly, “FN + Del” captures screenshots across all devices, and “FN + ESC” locks all screens. It really is seamless, and you don’t have to be changing “muscle memories” to suit the device you’re using.

“When it comes to typing, we can create a document quickly and comfortably on the computer, but when answering a text message on the phone we’re limited to what our two thumbs can do,” said Gnimh. “Now with the K780 Multi-Device, you can type comfortably at desktop speed on all the devices that you use at your desk, seamlessly switching between them with the touch of a button.”

Overall, the K780 is comfortable to type on and I wouldn’t hesitate to recommend this keyboard. But I’d perhaps add here that those who are looking for a lightweight, portable keyboard may wish to look elsewhere — at 875 grams (almost 2 pounds), it’s not exactly feather-light. For a device that’s so slender, its weight actually surprised me a little. On the positive side, that gives it a solid feel and makes me confident it won’t break any time soon.

Then there’s the issue of battery. All it takes is two triple-A batteries, and Logitech is confident that’ll power the K780 for around two years. I’d be surprised if it lasts that long without needing to change batteries, but even if it lasts a year, I’d be happy with that.