With Advertising Week New York 2016 wrapped, we take a moment to recap some of the trending topics, explain what got social media in a frenzy, and highlight some of the stories of the week.

Using data supplied by Spredfast, we’ve discovered the top three topics on Twitter across all four days of AdWeek NY — as the cool kids call it — and you won’t be surprised to hear that some of the most popular topics have nothing at all to do with advertising. 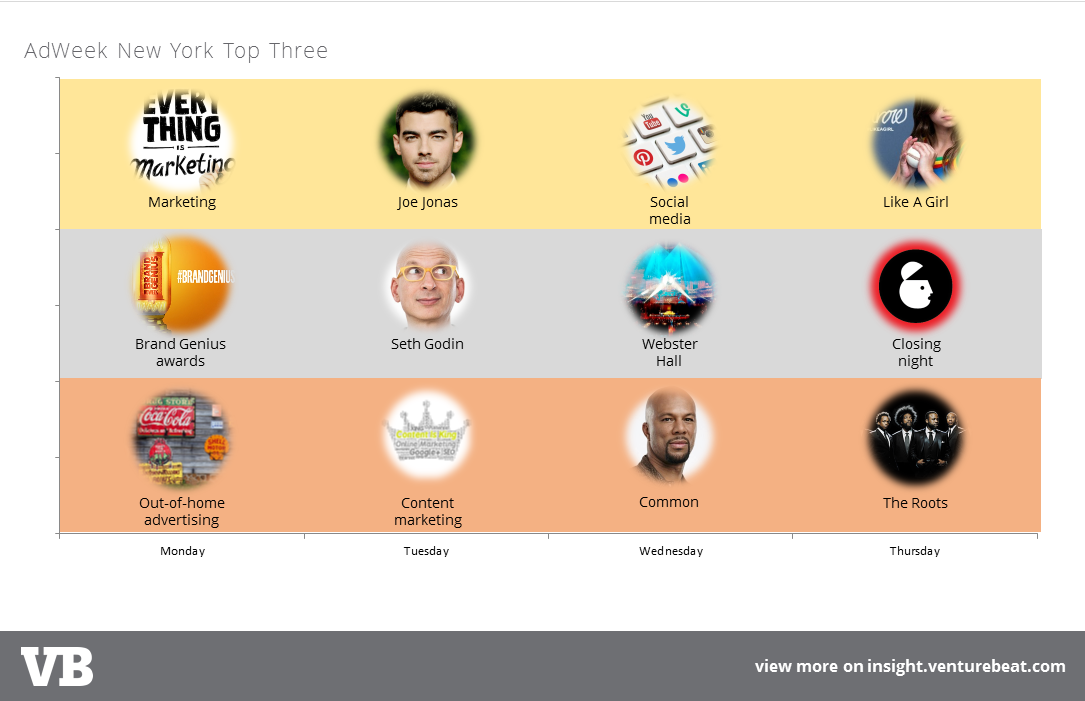 The first day of AdWeek was dominated by marketing, rather than advertising. In fact, the gulf between advertising technology (adtech) and marketing technology (martech) was a constant topic of discussion across the entire event. We interviewed Peter Hamilton, CEO at TUNE, about this exact issue on Monday, and it seems the rest of the Twitterverse had the the same preoccupation.

Advertising Week’s Brand Genius awards was the second-most tweeted event on Monday, as social media discussed the recipients of this year’s gongs. Interestingly, out-of-home advertising took third place, proving that there is life in the old print-industry-centric dog yet.

Outside of the Twitter topic podium positions, there was a lot of discussion around whether interstitial ads are worth the pixels they’re painted on. And ad fraud (especially on mobile devices) took the spotlight across all four days, so we talked with Steve Gold, CMO at IBM Watson, to understand whether artificial intelligence could be used to solve the problem.

Content marketing was the third-most talked about topic on the second day of AdWeek, and a new report showed that while brands are throwing themselves into this tactic, most of the content they’re producing gains little to no engagement at all.

At B.B. King on Tuesday, Seth Godin got people talking, as usual, and you can watch a replay to find out why right here. But it was a Jonas brother that took the top spot. While Joe Jonas spoke in a session on Monday, it was his performance with his group DNCE Monday night that saw him trending all the way through to Tuesday, taking the Twitter top spot with ease.

Outside of the Twitter trends, Facebook’s miscounting of video views was another topic that captured everyone’s attention throughout the week, but we spoke with Seraj Bharwani, chief analytics officer at Visible Measures, who thinks the answer is to take the high road.

Both the venue itself — the incredible Webster Hall — and Common, who performed at the Bing Live event, appeared on Wednesday’s trending topics, proving that the extracurricular content often generates more buzz than the educational content. But not to be outdone by celebrities and performers, social media itself stole the show on Wednesday, grabbing everyone’s attention on the Twittersphere for the day.

We also published the results of a new study from Viant that shows how retail brands can retain customers through better cross-channel strategies.

The final day of Advertising Week — which, at four days long, could be accused of false advertising — was dominated by the “Like A Girl” campaign. We underlined this topic on Monday when a new report into pro-female advertising was revealed by She Knows Media. It turns out that progress is being made, but adtech and men are still letting everyone down.

Female founder Dalia Asterbadi spoke with us exclusively about the launch of Verve.ai, an SaaS solution that provides data science for everyone, advertisers and marketers alike — maybe there is hope that data will bring everyone together. And Dom Bracher of Tapdaq proposed that ad mediation needs disrupting, and fast.

With the week over, online chatter turned to the closing night celebrations,which featured a performance by the legendary Roots crew.

After 260 seminars and workshops, daily leadership breakfasts, music, comedy, awards shows, and more — held across more than 20 venues in New York City — we’ve learned a lot from Advertising Week New York 2016. Next year, let’s hope that adtech and martech have learned a little too, and have managed to bridge the divide that separates them.