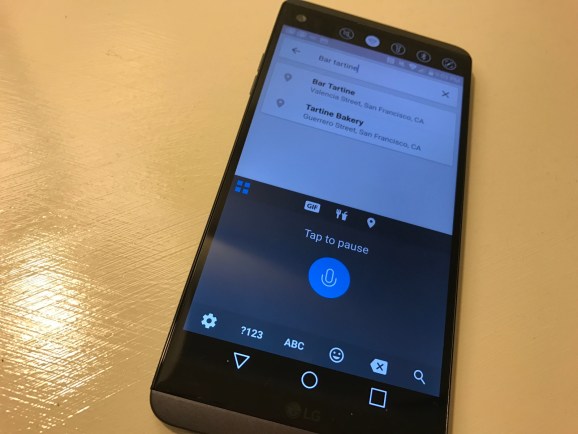 The app first appeared in the Google Play Store in the U.S. a few months ago. Since then, the team behind the app has added features like support for swiping on the keyboard (in addition to just pecking), restaurants from Yelp, and the ability to send animated GIFs from Giphy. The app’s virtual microphone also listens for a longer period of time before automatically shutting off.

In line with the results of a study Baidu conducted recently with Stanford, Baidu says TalkType enters text three times faster than people can enter it with conventional smartphone keyboard typing.

“I think it’s tragic so many people spend so much time on cell phones but we’re just now figuring out a good user interface,” Baidu chief scientist Andrew Ng told VentureBeat in an interview.

THe app can recognize and transcribe speech well — in some cases, better than Apple’s and Google’s dictation systems, in my unscientific testing — thanks to deep learning, a type of artificial intelligence that involves training artificial neural nets on lots of data, like speech snippets, and then getting them to make predictions about new data. Ng is one of the world’s foremost figures in deep learning; in 2011 he founded the Google Brain, a Google research initiative that’s still active today. But since joining Baidu in 2014, he has, among other tasks, been hard at work improving that company’s speech recognition system, which is known as Deep Speech.

And the design of the TalkType keyboard showcases the power of the Deep Speech under the covers. It’s not like Baidu added a little microphone button onto an existing virtual keyboard.

“This [the big microphone button that you push to start dictation] is the default, rather than a keyboard is the default, and you can find your way to voice,” Ng said, adding that Baidu’s web search system now receives three times more voice queries than it did in January 2015.

Baidu is thinking about launching a version of the keyboard for iOS, Ng said.