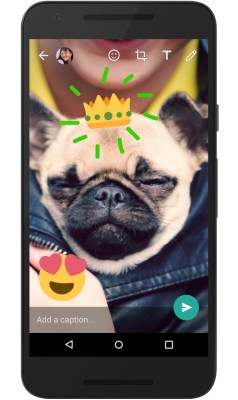 WhatsApp is jumping on the Messenger, Instagram, and Snapchat bandwagon with the launch of new camera features that lets you further personalize your photos and videos. Users can now write, draw, and even add emojis to their media, not to mention take selfies after WhatsApp added support for the phone’s front-facing flash. Oh, zooming with videos is now easier — just slide a finger up and down on the screen.

These features are rolling out today on Android and will be coming soon to the iPhone “soon.”

With more than 1 billion users, WhatsApp ranks among the most popular messaging services in the marketplace, along with its sibling app Facebook Messenger. Showing the success of drawing on photos and videos by Snapchat and other apps, Facebook has slowly been bringing this into its two communication apps. Facebook Messenger added support for these creative features in 2014. Users on Instagram had been able to do these since the release of Instagram Stories.

WhatsApp is already seeing tremendous growth in Voice over IP calls — 100 million calls are facilitated daily. It could be that these features are an effort to encourage conversational usage of the app.