During his opening Dreamforce keynote, Salesforce chief executive Marc Benioff introduced a bevy of products and updates, many of which have since been explored in detail. However, there was one which he quickly skimmed over called LiveMessage, an application that consolidates communication across multiple messaging apps. Today we know a little bit more about this new tool for businesses.

Built off of the HeyWire technology that Salesforce acquired last month, the app will provide service representatives more opportunities to engage customers where they are, not where the company wants them to be. “We’re in the midst of the largest disruption in the space since the creation of the 1-800 number, as we witness mobile messaging emerge as the new and preferred platform for service and support communication,” wrote HeyWire CEO Meredith Flynn-Ripley in a blog post announcing her company’s purchase. 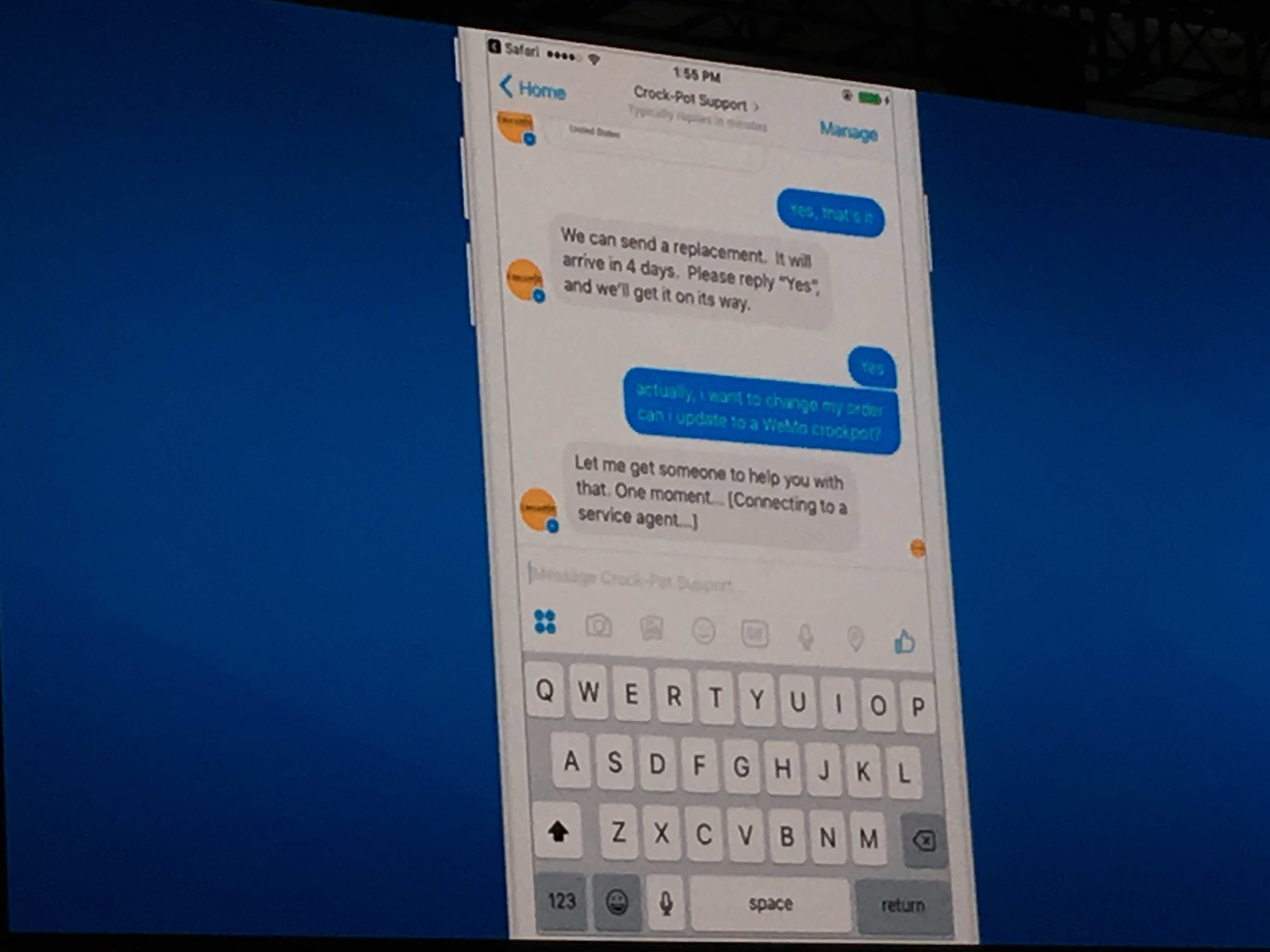 Above: Salesforce LiveMessage lets customers interact with bots and frees up human reps to respond to more complex issues.

Salesforce said that the product is currently in beta development and will become available later this winter when it supports Facebook Messenger. Eventually it will open up for WeChat and Line for international customers. The service features tools designed to enable supervisors to oversee how conversations are being routed to managers and also includes macros and recommended knowledge tools. Salesforce claims that customer companies will have a 360-degree view across any channel.

And yes, LiveMessage is also powered by Salesforce Einstein.

Essentially, LiveMessage is a bot platform that lets companies free up human service representatives to work on more complex problems. Through the app, representatives will have access to Salesforce data while also having conversations with multiple customers simultaneously. It also provides representatives with a single app from which to consolidate all communications, be it through text messaging, Facebook Messaging, WhatsApp, Snapchat, or a bevy of other services. By doing so, Salesforce hopes that it will generate an uptick in customer satisfaction and representative productivity. 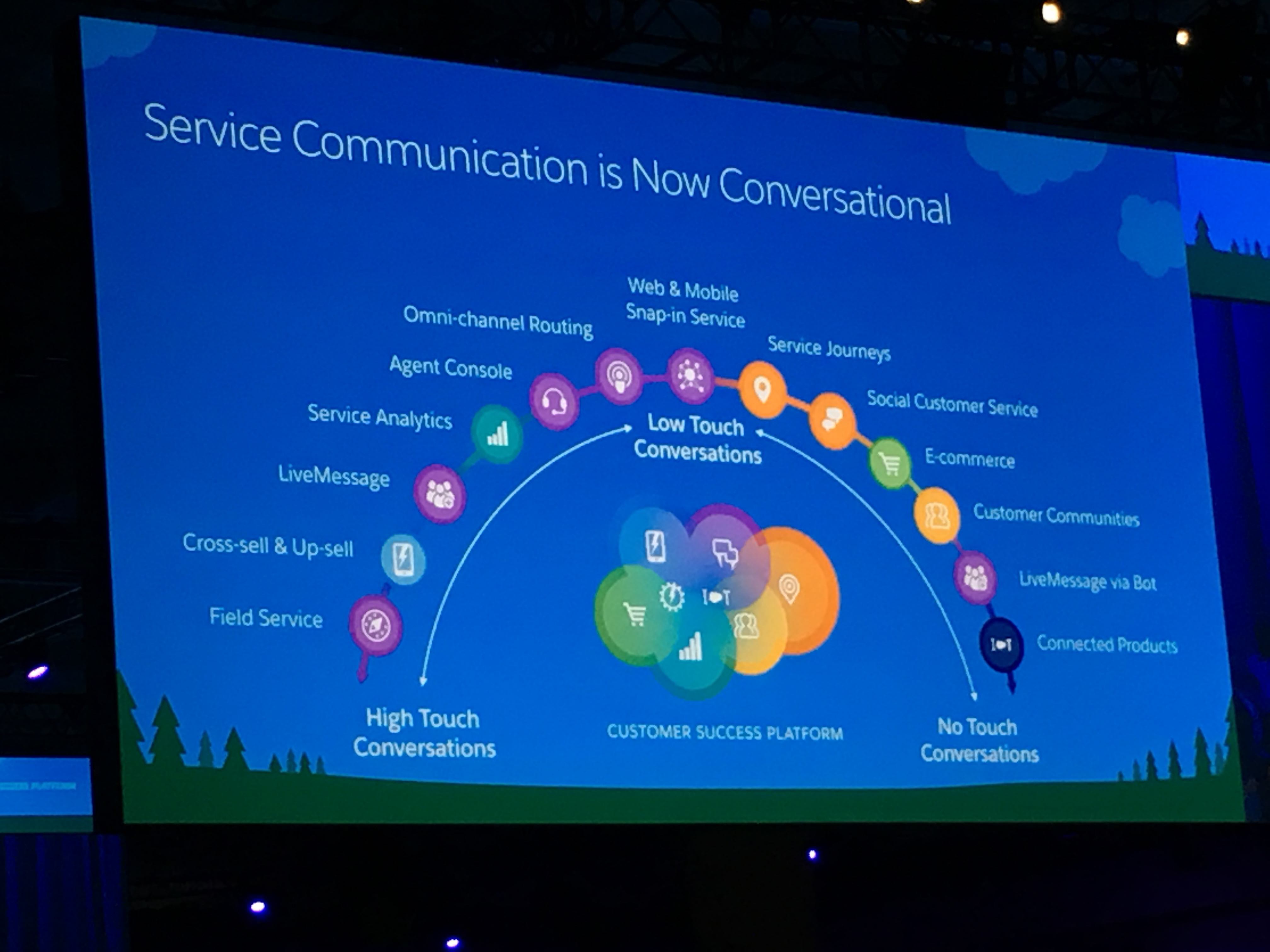 There’s currently no word on whether Salesforce will open up LiveMessage to developers so they can incorporate their own bots. But it’s important to note that the end users won’t have to download a new app — they’ll just use Facebook Messenger, WeChat, Line, or text to provide feedback to companies. The service representatives are the ones that have one app to use moving forward. The bot within LiveMessage is a text-based IVR service.

“Your phone is filled with rich and powerful messages, we exchange photos and videos, they’re fast, we do it in the context of our lives. We love sending these messages,” said Mike Milburn, senior vice president and general manage of Salesforce’s Service Cloud. He said that we’re approaching “new heights of customer success” with 1.4 billion live agent requests being made daily on Salesforce’s platform.

He spoke about how people are redefining what “service” means every day, moving the conversation away from phone to email, to social media, apps, and now to messaging, where 80 billion messages are sent daily. “Your customers want to use any channel, from the highest touch to the lowest touch,” Milburn explained. 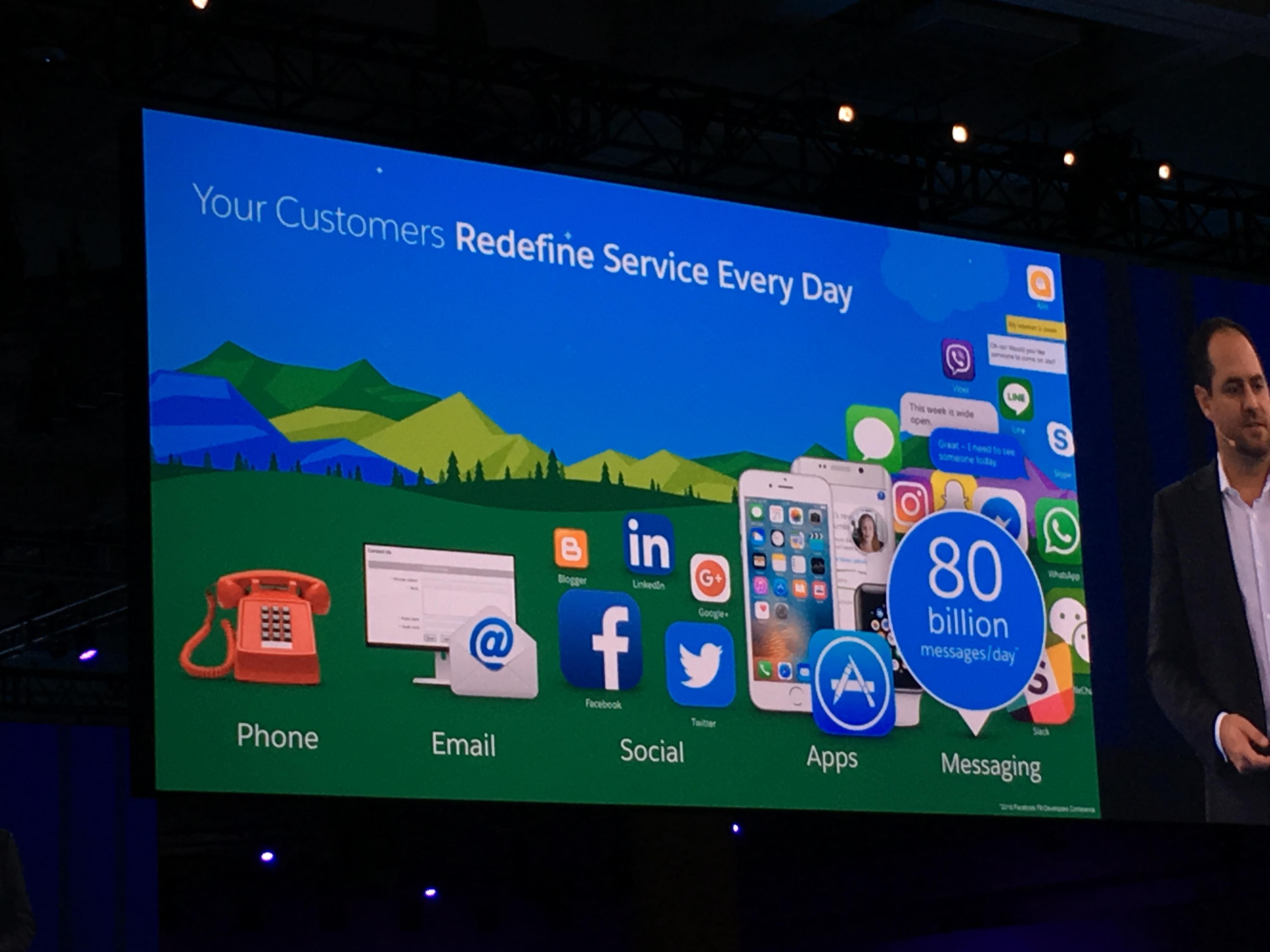 The announcement comes after Facebook, Microsoft, and even Oracle have launched tools that will help companies build chatbots that consumers can talk with on messaging apps. Microsoft chief executive Satya Nadella in the past few months has frequently spoken about conversation as a platform and specifically about how bots that participate in conversations with people effectively function as new apps.

Launching LiveMessage comes amid a busy year for Salesforce, which launched new tools such as Field Service Lightning, opened its SOS video SDK to two-way communication, and launched an omni-channel supervisor.