Facebook’s Oculus division opened its Oculus Connect event in San Jose, Calif., with big statements about its belief in virtual reality as the next generation of computer. Facebook CEO Mark Zuckerberg announced the company had invested $250 million in VR content, and it would invest another $250 million in the future. Oculus CEO Brendan Iribe introduced the company’s Oculus Touch controllers for the Oculus Rift headset. And they showed off a new prototype for an untethered VR headset, code-named Santa Cruz.

I was able to go hands-on with the Oculus standalone prototype, which has no wires and isn’t tethered to a computer. The prototype represents the future of VR, carving out a new space between mobile VR and PC-based VR. I had plenty of questions afterward, and I was able to interview Max Cohen, vice president of mobile at Oculus.

We talked about the nature of the prototype, which didn’t have the same bulky headset and batteries that other prototypes, such as Intel’s Project Alloy, have. We also touched on topics such as the PlayStation VR, production challenges, and the games for the PC-based Oculus Rift and mobile VR. 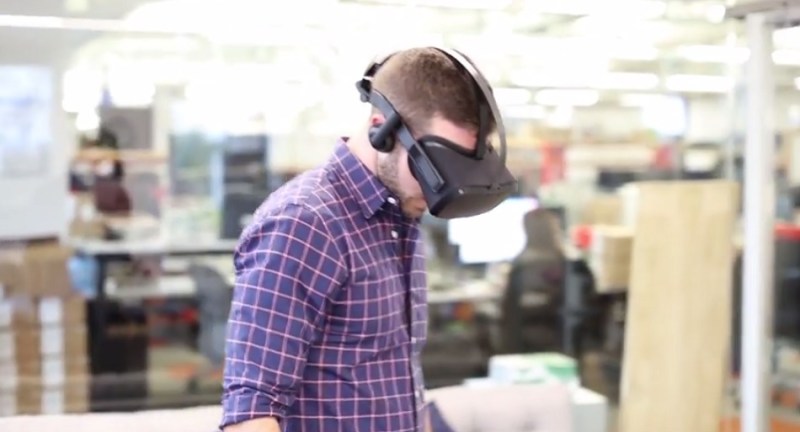 GamesBeat: It’s a pretty wide walk-in space that was available.

Max Cohen: We wanted to not fake it. We didn’t want to use walls with all these features, have a carpet that’s fake, anything like that to make it better. If that’s the case, then the technology isn’t ready. We felt like the inside-out tracking technology is ready, because we can use it in a legitimate room with a pretty wide space.

It could even be wider than that. There are limitations. You couldn’t be in a huge open space where inside-out tracking doesn’t capture anything. But we felt it was ready to show.

GamesBeat: Can you explain inside-out? The sensors are all in the headset?

Cohen: Everything is self-contained. There are cameras looking out that look at the environment you’re in. Then there’s computation on the headset, similar to what you find in a phone. That’s on the back of the headset, in the prototype.

GamesBeat: I tried on the Project Alloy headset that Intel has in the works. They had a very large battery on the back. The headset itself was pretty big. I wonder why the big difference. Yours is pretty small.

Cohen: Well, this isn’t a product. This is very early on our end. But we wouldn’t think this category is ready to progress if it wasn’t something we think users would want and use.

GamesBeat: Before I saw your prototype, I was thinking that Moore’s Law will eventually make this possible, but maybe not for a while. It seemed inevitable. But there’s a lot of engineering to be done in between.

Cohen: It’s true. People assume these things just happen by themselves. It’s a lot of hard works to do these types of things. I think about this all the time, because it’s easy to predict what’s going to happen in the future, but someone – us, or someone else in the VR space – has to make the breakthrough and do it. If we all sit back and say we’re comfortable with mobile and PC VR, there will be no sta

nd-alone VR. We have to try these things.

GamesBeat: Are there connections you’d draw between what you just showed here with this and what Michael Abrash was talking about? He didn’t seem to focus much on a particular wireless prototype.

Cohen: Where Michael’s coming from, at Oculus Research, they’re on the long-term train for VR. Standalone, I would say, is putting together the pieces of technology that we’ve been working on for some time. Research is what’s helping drive the breakthroughs. The breakthroughs are how you get to the next steps. You’re not going to get to sunglasses VR without a number of breakthroughs in optics and displays and things like that. That’s where research really shines. The stand-alone project in Santa Cruz was build out of our product teams, not out of research.

GamesBeat: I wasn’t sure if your prototype would really work, but I guess you just showed that.

Cohen: That’s why we’re showing it. We didn’t come here just to talk about it. We wouldn’t have mentioned it if it didn’t work.

GamesBeat: The one I viewed at Intel was just a mock-up.

Cohen: I haven’t tried it. Realistically, every company that is interested in VR is going to be interested in the standalone category because of the attractiveness of something that doesn’t take away the use of your phone and doesn’t require a high-end computer. That’s an attractive value proposition. Anyone who is in the VR space will be looking into stand-alone. We just felt like this feature prototype was at a stage where we could start showing it off. 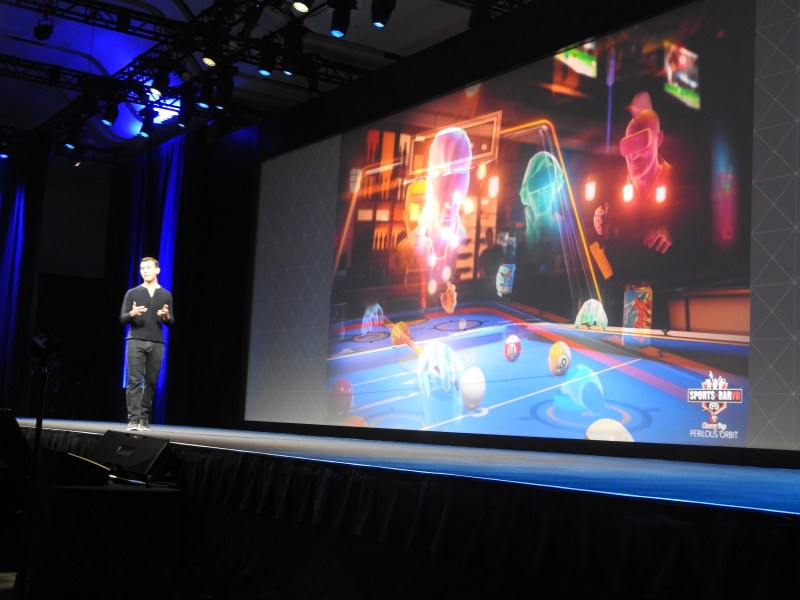 GamesBeat: Is there a way to do this that also leverages the cloud? Like an iPhone. That uses the cloud for a lot of different things.

Cohen: We’re not in a position where we can handle rendering in the cloud. You need local computation rendering. But as far as streaming in data—when I talk about dynamic streaming as a service, that’s leveraging the cloud. You can have videos that are incredibly detailed, 6K videos that would take way too much space on your phone, but then we can do smart things about only streaming down the piece of it that the user is looking at right then.

If you’re Jaunt or Within, you like having your own applications. You don’t want to just host video on Facebook. You want to build a fan base. There’s a number of activations you can do. You want to have custom UI. We’ll offer that technology to those partners in our SDK while they can still wrap it however they want.

GamesBeat: Backing out a bit, the environment for VR now—it’s an interesting market. PlayStation VR is launching. How do you feel about the competitive state?

Cohen: Having more and more VR companies in the space, as long as they do it right, is a great thing. If there were people out there pushing uncomfortable content, they would be doing us all a disservice. But Sony, with PS VR, it’s a good system. I’ve tried it. I like it. Google, others, anyone who’s in this space, they’re providing a bigger user base for developers to make money. Developers are going to port content to lots of systems. While we might have the most apps, if they take those apps to PS VR or Google or something else, there’s nothing wrong with that. They’ll make more money. That’s a good thing. We expect apps designed primarily for other systems to come to our other systems as well. It’s a virtuous cycle. It’s good for both users and for developers.

GamesBeat: What would you say about the tough year it’s been as far as production goes?

Cohen: Mark acknowledged that. We had some hiccups in the beginning, but we’ve moved past that. We expect to have Touch in volume available in December. It’s unfortunate that happened the way it did, but frankly, that is really in the past. People who want their Rifts now get it in a couple of days. Touch will ship very quickly. 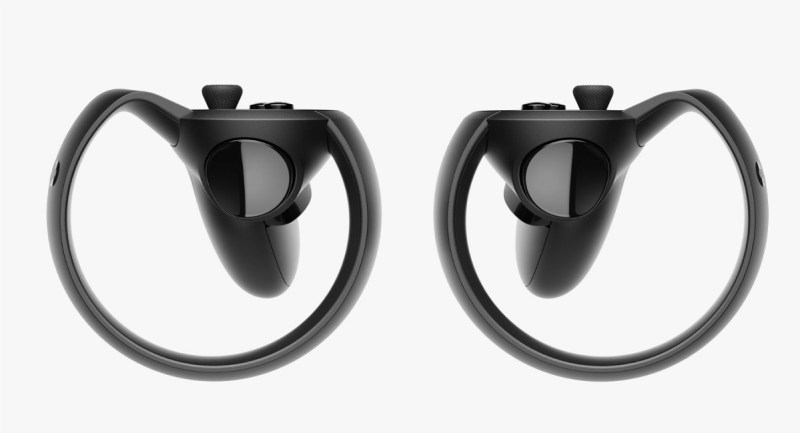 GamesBeat: Is Touch an easier manufacturing challenge than the Rift itself?

Cohen: Touch is actually very complicated as well. It’s just a matter of where we are today versus where we were before.

GamesBeat: Consumers, the ones who are excited about this, seem to be all in anyway. No matter what some of the problems or hiccups may be. They also seem to be all in even though they know it’s going to change. In a year, a couple of years, wireless systems will come into being.

Cohen: But there will still be a place for mobile VR and PC VR, even when we have standalone. We don’t see standalone as crowding out other categories. We see it as expanding the market to people who don’t have Samsung phones, for instance, or don’t have a high-end PC. It’s another option for them.

GamesBeat: It seems so different from consoles, though. With a console, if you’re looking at a console that’s been around four or five years, you might wait. But with this, there’s some kind of new change that can happen much more frequently, but people are going to buy them anyway.

Cohen: Consoles don’t usually have backwards compatibility. Sometimes they do. But the reality is that the console market is designed very differently. You’re seeing that change with the new Sony and Xbox consoles. That era is changing across all technology form factors. Does that mean VR will be on a yearly update cycle like phones? Maybe. That’s up to a number of manufacturers. But technology is proceeding so fast that sometimes you can’t wait for several years.

GamesBeat: Does it change an expectation as far as how much each generation is going to sell? Some people may wait until next year.

Cohen: To be frank, I’m not concerned about that. It’s not like we have internal sales targets we’re trying to hit. We’re building an industry and we’re focused on the long term. There might be some short-term things you can optimize around sales numbers, but we need to make sure developers are happy and making money so they keep making content. That’s our number one and two priority.

The number of users we have is a very secondary concern. We’re not looking to win today or tomorrow. We’re laying the foundation to make sure this is a meaningful market in the future.

Above: I Expect You To Die

GamesBeat: The games I saw here are a step up from what I’ve seen before. But they all have that one characteristic, in that they’re pretty stationary. You teleport from one place to another, or you sit in a car like in Jesse Schell’s game. When do you think we’ll advance from there?

Cohen: It’s not so much an advance. It’s a realistic assessment of what kind of spaces people have in their homes where their computers are set up.

GamesBeat: Part of it is also motion sickness, though. I wonder when that goes away and you’re more free to design games where there is some motion.

Cohen: What you’re suggesting is taking existing gameplay paradigms and porting them wholesale and having technology fix that. I think that’s never going to happen. Instead, VR is going to find new ways.

If you’re in a movie, movies are not first-person. There are scenes all laid out with different cuts because they’re telling a story. It’s not like we have a better technology and you’re suddenly in the movie. You would lose something that way. It’s a different art form, making a VR film, because the viewer is now in the scene itself. I don’t think it’s a matter of technology. It’s finding the right ways to design VR games that work for this medium.

GamesBeat: What was more immersive about the earphones, by the way?

Cohen: Because they’re in-ear, it’s a little bit better noise insulating. It’s not for everyone. It’s harder to then hand over to a friend. You can pop off the other ones and slap these on, though. Where the headphones are, you plug them in. 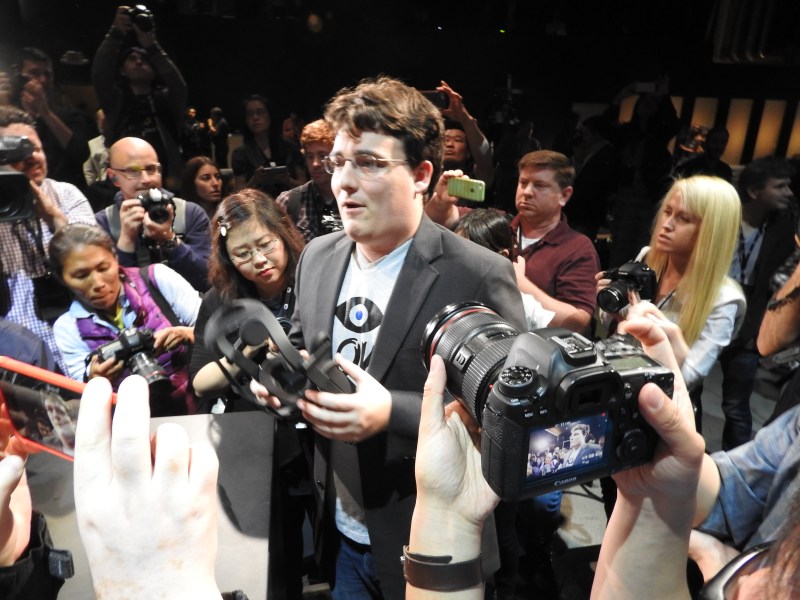 GamesBeat: Palmer Luckey was conspicuously absent from the stage. Do you have any comment there?

Cohen: Palmer chose not to be here.

Cohen: That’s exactly why Palmer chose not to be here. He didn’t want to be a distraction.

GamesBeat: Is there anything else you wanted to add?

Cohen: On the mobile side, just how vibrant that ecosystem is. We’re at 400-plus applications, getting close to 500 by the end of the year. There’s a lot of energy in the ecosystem from our user base.