After almost two years as a pilot project, Facebook has now launched its enterprise-grade social network for all companies.

During its beta phase, Facebook at Work, which today is being rebranded as Workplace, has been adopted by more than 1,000 invited companies, including Royal Bank of Scotland (RBS), Heineken, Telenor, and Hootsuite. Taking on incumbents such as Microsoft’s Yammer and Slack, Facebook now hopes to do for corporate communications what it has done for interpersonal networking around the world. It has built a service completely separate from the main Facebook experience, with its own branded app, and enterprise-focused features including single sign-on (SSO) access.

Workplace was originally planned to launch fully last December, though it seems that Facebook elected to keep things under wraps a little longer to garner feedback and iterate the product. But at a packed event at the company’s London headquarters, VentureBeat was there to see Nicola Mendelsohn, Facebook’s vice president for Europe, the Middle East and Africa (EMEA), officially open Workplace for all.

During its pilot, Workplace was completely free to use, but it was clear that it would cost money once it was rolled out to the masses. Some early indications suggested the company would seek to charge a per-user, per-month fee of somewhere between $1 and $5, but today the company revealed a tiered pricing structure based on the number of active users a company has — it will be $3 per user each month up to 1,000 users, before dropping to $2 for up to 10,000 users and then $1 for everyone above that. 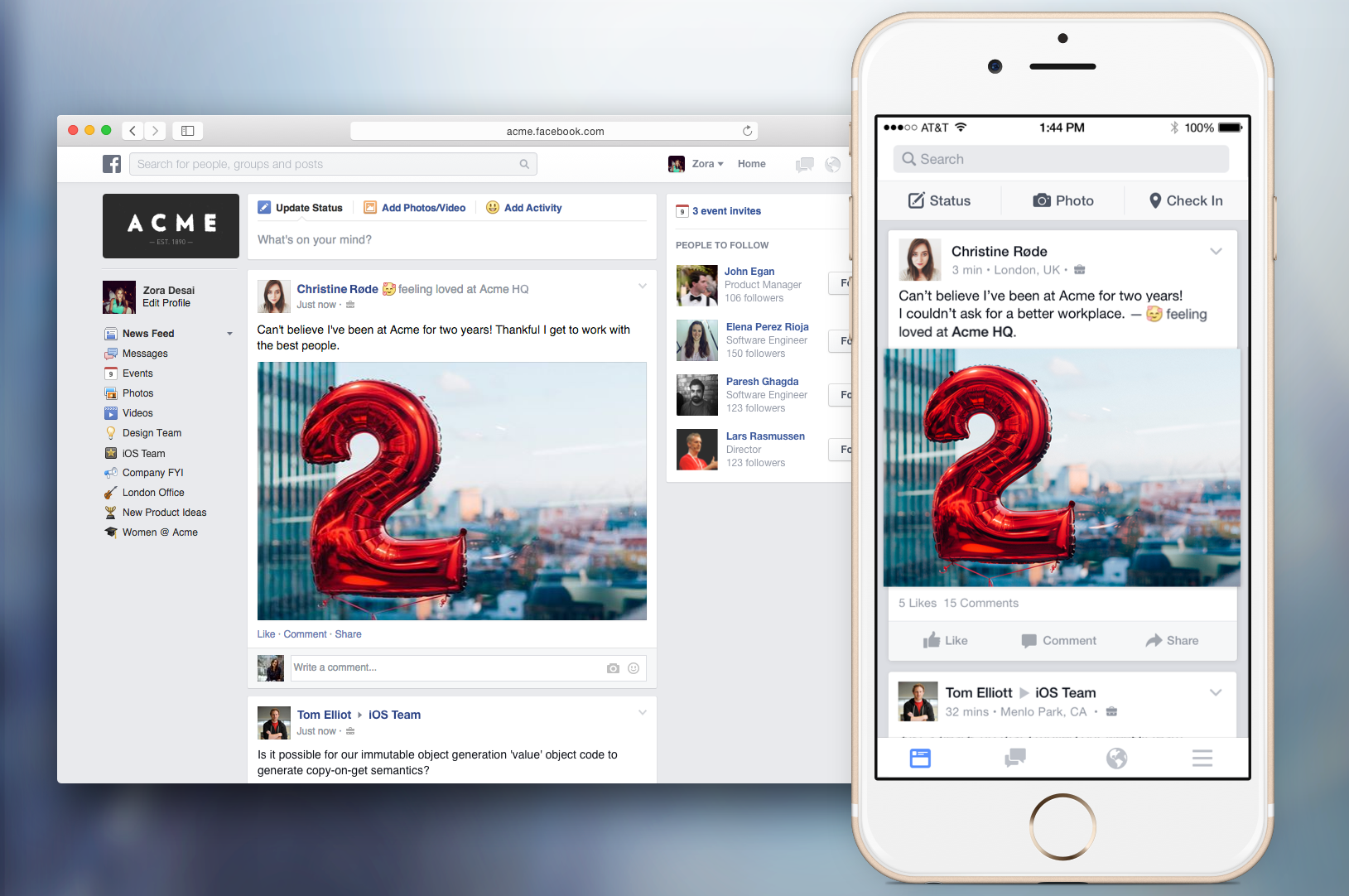 Today’s event represented the first time Facebook has launched a new global product from outside the U.S. The reason for the London launch does actually make sense, however, as the Workplace program is being operated from the U.K. capital, with director Julien Codorniou running the initiative.

The seed for the new service actually grew from a specially adapted version of Facebook that the company itself has been using for years in-house. In an interview with VentureBeat last year, Codorniou explained why the company was pushing out into the enterprise realm.

We don’t want to be an enterprise social network. The reason why we are shipping Facebook at Work is because we’ve been using it ourselves for many years internally. And millions of businesses are already using Facebook for work, for example with Facebook Groups. It took us some time to decide to go after this category.

It’s also a very different business model. The mission of Facebook is to connect the world. We spent the first 11 years connecting people in their personal lives, and now we’re going for the workplace. We realized the value of being connected, and when you bring something like Facebook into the workplace, amazing things happen in terms of productivity, collaboration, efficiency.

Much has happened in the enterprise social network space since Workplace was first announced. Slack, the team communication app cofounded by Flickr founder Stewart Butterfield, has raised $360 million in VC funding, taking its total amount raised to $540 million since 2009. Meanwhile, Yammer, the platform acquired by Microsoft back in 2012, recently revealed plans to kill off its enterprise plan, effectively meaning it will cease to exist as a standalone service. Instead, customers will be encouraged to move to an Office 365 Enterprise plan instead, which comes packaged with Yammer out of the box. By bundling Yammer in alongside Office, Microsoft’s hoping that this will increase the stickiness of all the applications.

It’s no secret that Facebook, among other non-enterprise social platforms, are already widely used in the workplace, either personally or as part of work. But with Workplace now ready for prime time, it could be set to explode and be integrated into the very fabric of companies’ operations.