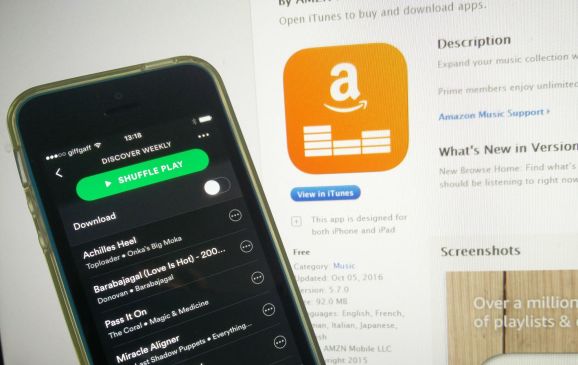 We kinda, sorta knew it was coming, but Amazon finally lifted the lid on its new music-streaming service this week.

Amazon Music Unlimited (AMU) is an extension of Amazon’s existing Prime Music service, the latter of which offers a limited selection of tracks as part of its $99 annual Prime membership. With AMU, however, Amazon is taking on the big dogs of the music-streaming realm, including Spotify, Apple Music, and Google Play Music.

It’s worth noting here that there are, of course, others operating in the space, including Microsoft’s Groove Music, Tidal, Deezer, and SoundCloud, among others. But for a quick comparison to see what each service offers across price, devices, markets, and content, we’ve kept things simple by looking at how AMU stacks up against what are arguably the three biggest existing players in the field.

Price, it’s fair to say, plays a big part in consumers’ decisions. For the most part, $10 has emerged as the standard pricing for ad-free, unlimited music streaming. But there are some differences.

Overall, the four music-streaming services offer largely similar pricing, though digging down reveals some nuances that may appeal to certain demographics or markets. For example, Spotify and Apple Music offer cheaper subscriptions for students. But Amazon is throwing Prime subscribers a bone in the form of a slightly cheaper plan for music-streaming — whether a $2 per month cut is enough of an incentive to sway a Prime subscriber from Spotify isn’t clear, but anyone already considering signing up to Amazon Prime could view this as one more reason to take the plunge.

It’s also worth noting here that those subscribing to YouTube Red, Google’s ad-free version of the video-streaming service, also receive Google Play Music gratis, which makes it a far more appealing proposition. However, YouTube Red is only available in the U.S., Mexico, Australia, and New Zealand.

Being able to listen across multiple devices is a major selling point for music-streaming services.

Each of the services offers roughly the same platform support, including the two most common mobile operating systems, but consumers may be swayed by slight variations.

The availability of a service in any given market usually only matters if you can’t access it where you are — Amazon, Spotify, Google, and Apple all offer their respective services in the U.S. But it’s a different story elsewhere in the world.

For those who can access each of the four services below in their home country, availability in other markets is obviously not an important factor. But anyone who lives outside the U.S. won’t be able to access Amazon Music Unlimited, just now, while only those in four markets will be able to sign up in the foreseeable future.

Without committing to specific numbers, Amazon said that its new Unlimited service offers “tens of millions” of tracks, which is roughly in line with the competition.

While some platforms, including Apple Music, have nabbed exclusive access to certain artists, broadly speaking, all four services offer roughly the same music. And is anyone really going to choose one service because it markets “35 million songs” compared to its competitor, which only promises 30 million?

There is only so much music someone can listen to, so really it all comes down to how the music is packaged for discoverability (see “other factors” next).

There are other factors that music fans sometimes consider when choosing between services.

Serious audiophiles may wish to consider a service that offers CD-quality lossless streaming, such as Tidal, which offers this for around $20 / month. The average user, however, won’t notice much difference between the 256 Kbps (AAC) offered by Amazon and Apple and the 320 Kbps (Ogg Vorbis) offered by Spotify. Put simply, most people should be more concerned with buying a decent Bluetooth speaker or headphones than the streaming bitrate — the quality is all but indistinguishable.

What music fans do typically care about is how easy it is to find music that they like. Amazon, as with its counterparts, promises hand-curated playlists and personalized stations. But Spotify has arguably emerged as the front-runner on the discoverability front.

Spotify’s music-recommendation initiatives are powered by the Echo Nest, a music-intelligence and data company it acquired back in 2014. Last year, the company introduced Discover Weekly, a personalized playlist of songs for each user based on their listening habits. And last month, Spotify threw Daily Mixes into the fray, too.

Overall, Amazon’s new on-demand music-streaming service is competitive and broadly comparable with the main players in the space.

For those who own one of Amazon’s Echo contraptions, Amazon Music Unlimited really could prove a bargain at $4 per month — however, it’s limited to listening on a single device.

Those who already subscribe to Amazon Prime may find the extra $8 / month for music streaming too good to turn down, though, in reality, paying an extra $2 per month isn’t exactly off-putting for the added benefits available on Spotify, Apple Music, or Google Play Music.

A lack of Chromecast or Apple TV support will certainly deter some folks, but, for now, the biggest obstacle to signing up to Amazon Music Unlimited is its market restrictions — it’s limited to the U.S., with only three additional markets on its near-term agenda.