Tinder is introducing a new feature that automatically alternates the profile photo visible to prospective matches. 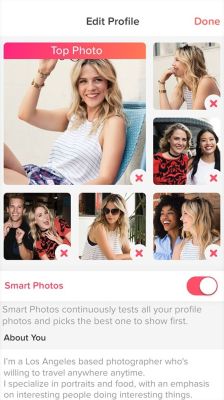 With Smart Photos, Tinder’s algorithm tests a number of photos to establish which one(s) perform best, and switches the photos around to display those that solicit the most right-swipes. So if that photo of you posing with your cat garners 10 percent more positive responses than the one with you caressing a beer, Tinder will switch the images around.

It’s worth noting here that different people may see different images, depending on their own swiping history — so if someone typically swipes right on smiley group photos, for example, they may be presented with more of those photos. In testing, Tinder says Smart Photos led to a 12 percent rise in “matches,” and it anticipates that the feature will get smarter over time.

Tinder has been on something of a hot streak of late, and Smart Photos represents the latest in a series of notable new features. A few weeks back, the company introduced Tinder Boost, letting users pay to have their profiles promoted for a 30-minute period. This followed a partnership with Spotify that lets users find potential matches based on a shared taste in music.

Elsewhere in the online dating space,Tinder rival Hinge earlier this week announced it was going premium and ditching swipe-based matchmaking to encourage more serious relationships instead.