Influencer marketing continues to grab the attention of brands everywhere, especially in light of the ongoing attack on advertising through ad blockers.

But one network that has proven difficult to tap into — thanks to its stance on third-party tools using its API and difficulties measuring performance metrics — is Snapchat.

Today, Fanbytes — a UK startup run by a group of young entrepreneurs and engineers — is announcing the launch of its programmatic Snapchat influencer network and performance measurement platform. The product uses a combination of both content and technology to solve the problem of how to use Snap Inc’s ephemeral messaging platform for influencer marketing purposes.

The company itself is a testament to the influence being wielded by the “Snapchat generation.” Founded by three 20-somethings, it has grown into a seven-figure business in less than 18 months. Instead of following the agency business model, Fanbytes has made its technology available as a self-service platform.

So how does it work?

Fanbytes — which started out by providing influencer marketing content on YouTube for clients such as Adidas, Puma, and Disney — has built a media network that has already clocked up an impressive 5 million views.

Customers select the audience they want to target, and Fanbytes will then determine the best mix of influencers to reach that target demographic. This includes the ability to target by location.

“The influencers create the content, and they distribute it across Snapchat,” Timothy Armoo, CEO, and cofounder at Fanbytes, told me. “Many times, there is the opportunity to also do cross-promotion around an influencer’s Twitter and YouTube audiences. We’ve built a SaaS tool to help brands manage their account.”

Fanbytes then uses its technology layer, without using the Snapchat API, to assess performance and understand how well the campaign is performing — measuring views, screenshots, and story completion rates. 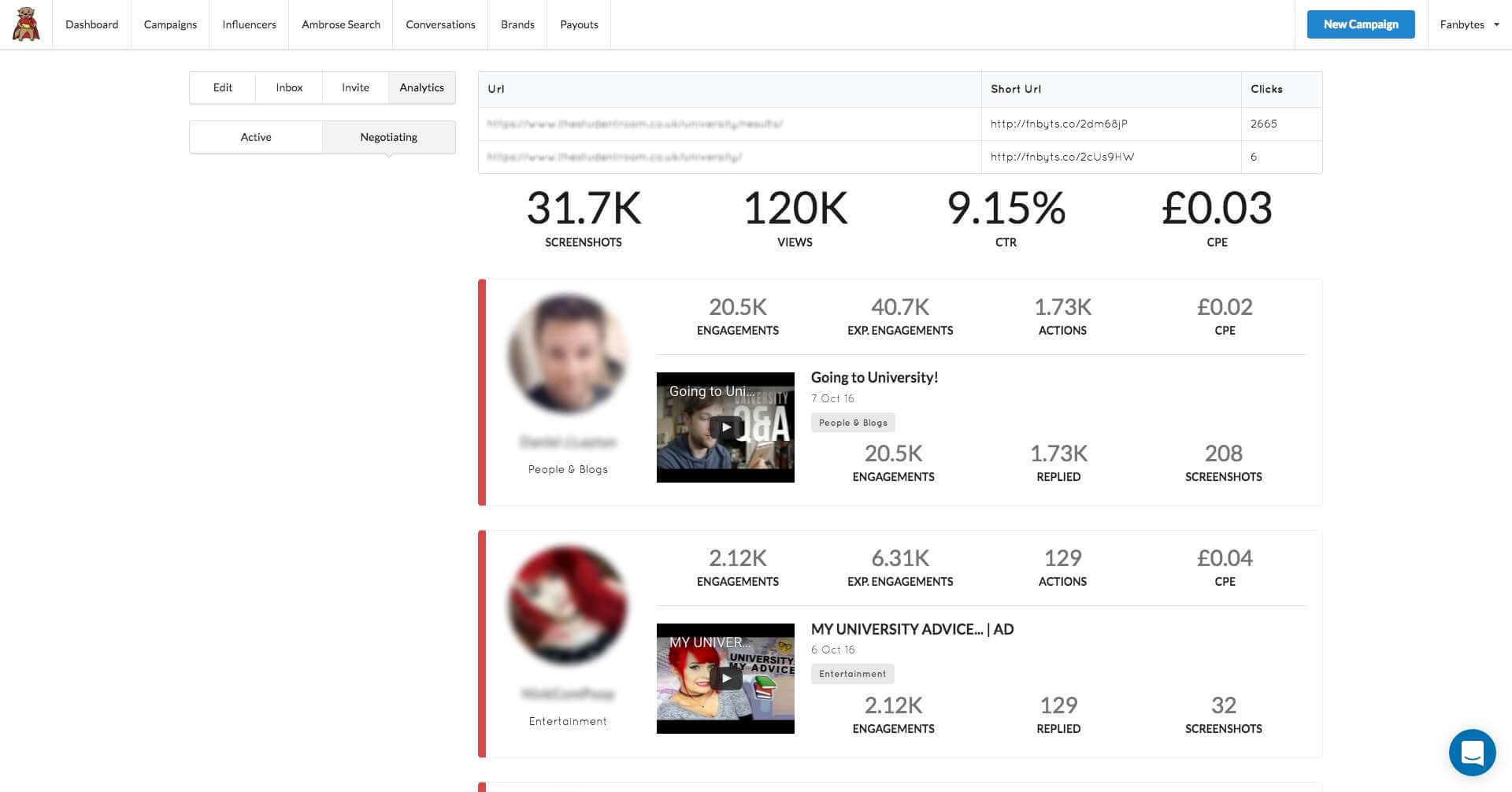 “We’ve built a layer of semantic data technology on top of our platforms, enabling brands to find the perfect influencers,” Armoo said. “We’ve developed our proprietary technology, which interfaces with the Snapchat app, enabling brands to be able to measure performance and analytics across Snapchat. It was a hard technical feat — it’s what happens when a group of geeky 21-year-olds go into a room for a week and refuse to leave until it’s done.”

Fanbytes also makes use of smart, short URLs to promote “virtual click-through.” Snapchat doesn’t allow for actual click-through from snaps, but with a short, memorable URL, users can head straight from the story to their browser to type in a URL that invariably leads to a landing page with information, an offer, or a sign-up form.

“We’ve built an analytics dashboard helping brands track results,” Armoo said. “Everything from attribution to short links is included in the dashboard, enabling brands to get a full 360-degree view of how they are doing.”

While initially focusing on the entertainment industry, Fanbytes is launching with an extended network that takes in such verticals as fashion, beauty, gaming, and fitness. The company estimates its launch network will generate around 50 million monthly views. Pricing is variable based on the campaign.