More than a year ago, Zenefits seemed to be riding high as a company Silicon Valley investors salivated over. It had amassed significant growth and traction some deemed warranted a $4.5 billion valuation, but eventually that came crashing down following allegations it wasn’t following compliance regulations. The bottom fell out, and not only did Zenefits have to settle with several state agencies, but its founder Parker Conrad resigned.

Under new leadership, the company has shifted its focus towards correcting its actions, soldiering on with its mission to be the all-in-one human resource (HR) solution for small businesses. On Tuesday, Zenefits turns the page on a new chapter in the three-year old startup’s history, one that transforms it from a set of products to a platform thanks to the launch of its app marketplace.

“Zenefits defined the all-in-one HR category in 2013, bringing HR and benefits together in a tightly integrated, online system,” said David Sacks, the company’s chief executive. “While the rest of the market is still trying to catch up to Zenefits 1.0, we are taking a radical step forward and redefining what it means to be truly all in one. This is a culmination of everything we have been building for the last three years.” 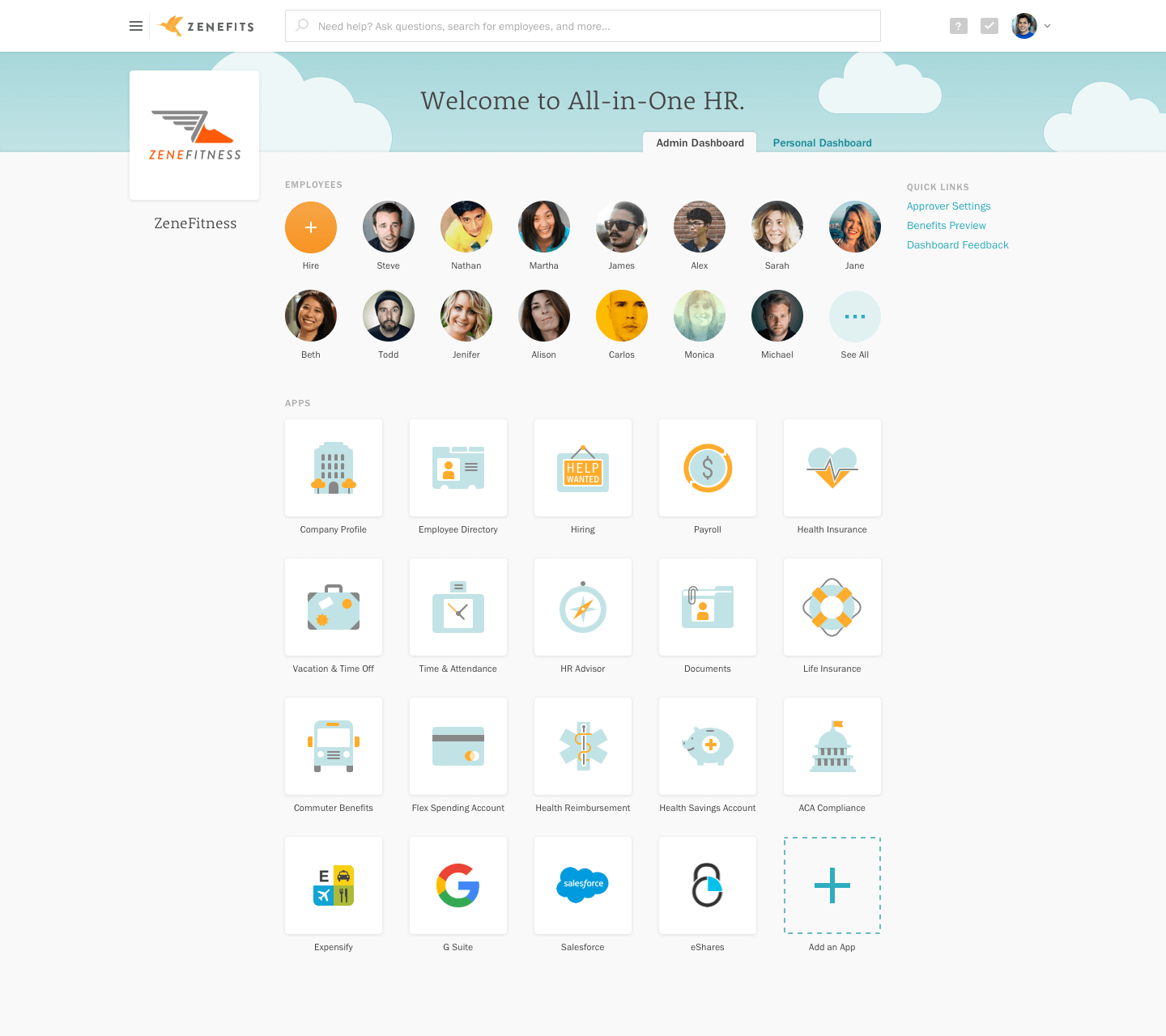 Called Z2, the marketplace is similar to Salesforce’s AppExchange, but specifically geared toward those apps that want to tap into a system with extensive knowledge of a company’s workforce. At launch, there are 17 integrations, including Google’s G Suite, Microsoft Office 365, Salesforce, Slack, Intuit Quickbooks, Xero, Abacus, Expensify, eShares, Lattice, Zugata, Greenhouse, Lever, Blueboard, Officevibe, and Bonusly.

“Zenefits is driving a convergence, breaking down walls that used to exist between HR, payroll, and benefits,” Sacks opined. “These used to be three separate categories that didn’t talk to each other. What Zenefits has done is driven consolidation where you have companies racing to provide these three things. Now we’re moving beyond that to be a platform that becomes hundreds of categories.”

Installation of apps can be done with a couple of clicks. Administrators select the services they want and authenticate using a Facebook Login-type model. The app will tell you what data will be provided from Zenefits and how it will be used, but if rights need to be revoked, you can do it quickly with a click of a button.

By opening itself up to third-party partnerships, Zenefits can expand its functionality into productivity, recruiting, payroll accounting, employee engagement, stock options, performance management, expense reporting, and more. Sacks explained to VentureBeat that the app store is the “only true way to be all-in-one, combining a suite approach with a pure-play, best-of-breed approach.” While the company has exerted countless hours perfecting its payroll, benefits, and HR products, it recognizes that it can’t do everything, hence the shifting into a more open ecosystem.

Itai Turbahn, director of product management, stated that Zenefits had been working on Z2 for close to a year and that the company is thinking about providing administrators with a flexible system tailored to their needs. “Zenefits is thinking that we’ll focus on the HR, benefits, and payroll apps where we can add value, but we want to work with best-of-class developers,” he said. 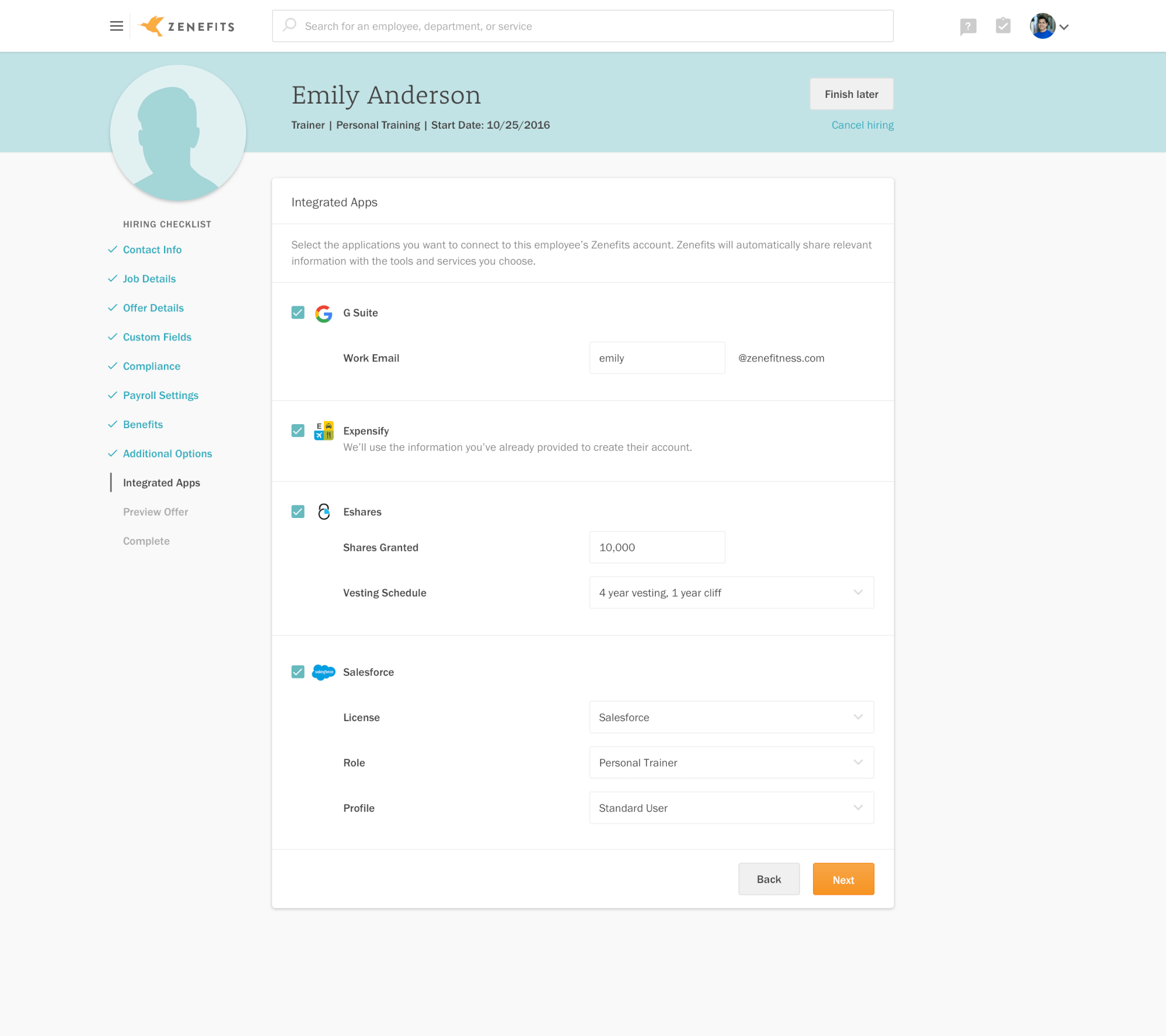 With its focus on small businesses, Zenefits believes this app marketplace will be invaluable to this segment. Unlike the enterprise, small businesses don’t have a dedicated IT department to install new systems when needed, but with Z2, companies can quickly connect their people platform with third parties. “Because you have profiles in Zenefits and third parties, your information is exchanged in the background,” Turbahn stated. “You don’t have to think about it.”

He went on to explain that developers want to integrate with Zenefits because of the value around the employee lifecycle. Zenefits is the employee system of record — it’s the first place that knows when an employee is hired, moves departments, and gets terminated. If a worker isn’t in Zenefits, they won’t get paid. If they’re not terminated in the system, they won’t be eligible for COBRA insurance.

For apps tied in with Z2, it’s more about getting to know who works at the company. Developers can include specific questions that administrators need to answer when onboarding or maintaining an employee’s record. In an example, Turbahn highlighted a “checklist” that administrators have to complete in order to ensure workers are in compliance. So when creating a new account, beyond establishing tax, immigration, and other pertinent details about an employee, recruiters can also include details about stock options (if using eShares), rights to Salesforce, their email address (through G Suite), and more. It’s important to note that much of the activity will take place within third-party apps, not through Zenefits directly.

Although there are 17 integrations right from the start, there are more being planned. Sacks and Turbahn admit that their company is being deliberate about what apps are supported. There will be “big players” that are vital for the ecosystem, but Zenefits will open itself up to smaller developers to facilitate innovation. However, the marketplace will balance the number of apps with customer security to ensure sensitive data isn’t compromised. “We will curate the apps to make sure that they are safe for customers,” Sacks promised. 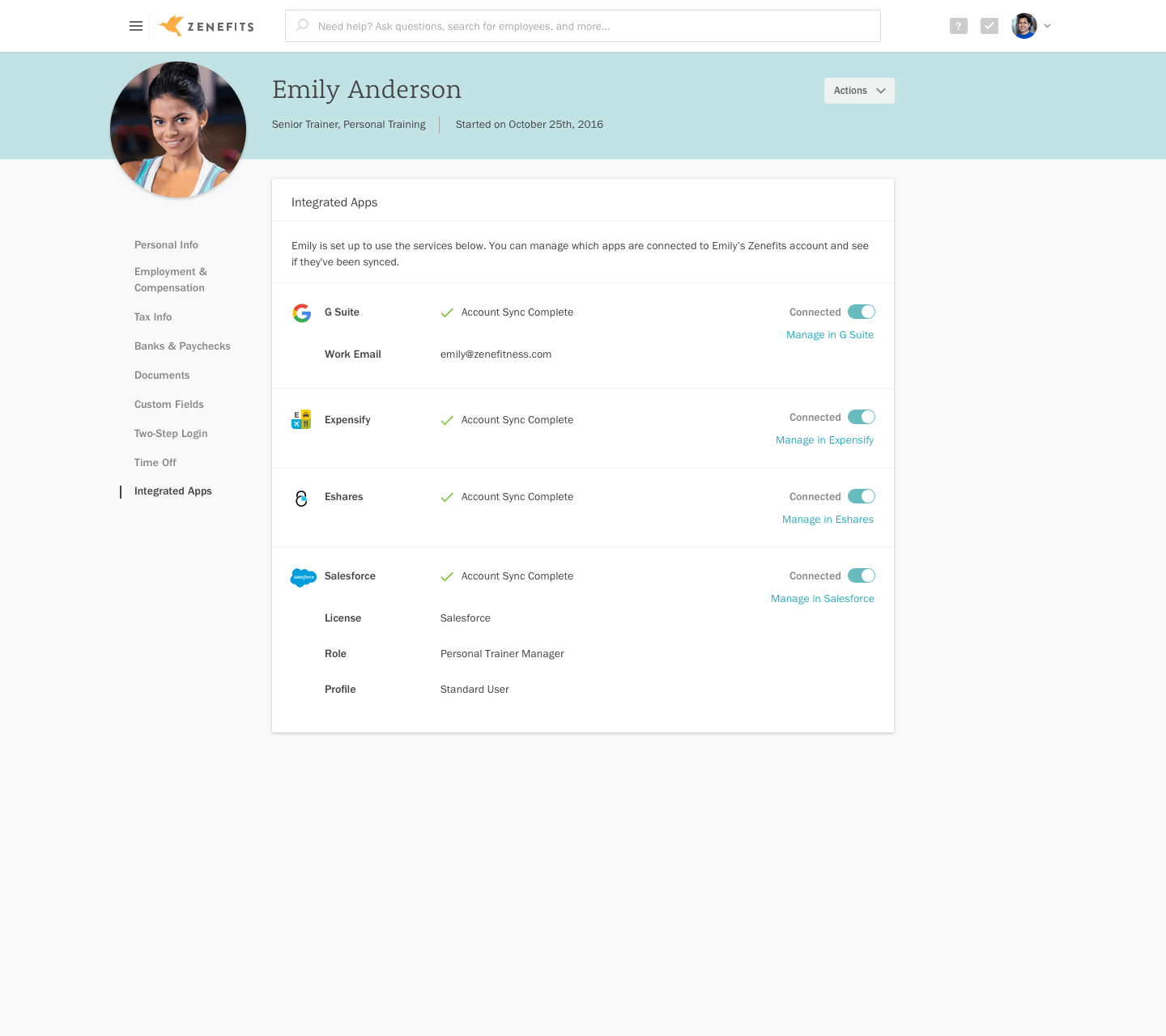 The launch of Z2 comes as Zenefits faces increasing competition from the likes of Gusto (formerly ZenPayroll), EaseCentral, Justworks, and even legacy providers ADP and Paychex. Many of these companies are expanding beyond their core offering with the hope of capitalizing on workforce data — Gusto, for example, has not minced words in its battle with Zenefits, adding benefits and HR tools to its payroll system and claiming many of its new customers came from Zenefits: “Customers want to work with a company they can trust.”

Sacks shrugged off the criticism, saying that the issues that plagued his company happened “under previous management” and that he’s “very confident in saying that our problems are over” now that certain employees are no longer associated with Zenefits.

He acknowledged that there are still some compliance issues being worked on in some states, including California, but settlements have been reached in nine states. Sacks also boasted that Zenefits has received wide praise from regulators.

When asked about how can companies feel confident in Zenefits again, Sacks said, “We’ve been praised by regulators; they’ve looked at the situation closely. This should be reassuring to everyone else. These issues that occurred we fixed pretty quickly. The question was how would historical issues be resolved, and I think they’ve been resolved in a way regulators feel confident in the company.”

In addition to Z2, Zenefits has also announced a bevy of new products, including the release of an in-house developed payroll service and accompanying mobile apps, a benefits shopping service, an updated Android app, a Zenefits Slack bot, and an HR advisor offering.