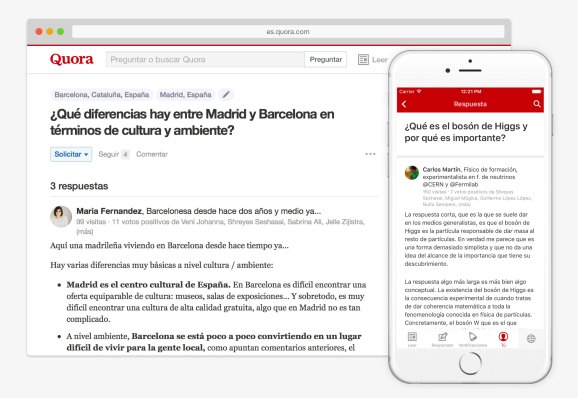 Quora is making itself accessible to more people around the world with the public launch of its Spanish edition. Though it was previously available as invite-only, now anyone can join to answer and read questions submitted to the site.

Introduced in August, Quora en español appears based off of your IP address, so if you’re accessing the site from Mexico, Colombia, or any predominantly Spanish-speaking country, you’ll see this version. And it doesn’t translate questions or responses — the company has created a new instance of the service that’s essentially a standalone product with its own questions. Initially, Quora only a gave a small group access, in an effort to see how the service would take off, and three months later, it appears the company is happy with the traction.

According to Quora chief executive Adam D’Angelo: “In just a few months, Quora in Spanish has grown to include thousands of high-quality and valuable answers from qualified people in fields ranging from science, politics, technology, entrepreneurship, and art.”

Branching out to other languages is certainly important for Quora, as it has said that more than half of its 100 million monthly unique visitors are from outside the U.S. “Most of the world’s population does not know English, so expanding into other languages is critical to enable more people to be able to share knowledge with each other. Spanish is one of the most widely spoken languages in the world, which motivated us to choose Spanish as the next language to launch,” D’Angelo said.

And Quora isn’t going to stop at Spanish. There are plans to move on to other major languages in the future, though no firm timeline has been provided.