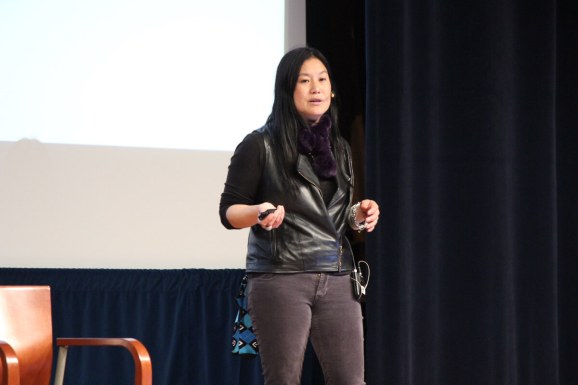 This year, we’ve watched Apple, Google, Facebook, Samsung, Microsoft, and many other tech giants make acquisitions or launch products to get into the bot business.

They’re building bot ecosystems around their chat app platforms — in SMS, web pages, and elsewhere — but they’re still facing one of the biggest problems in this age of artificial intelligence: How do you find the very best bots?

Microsoft wants to expand its bot directory, Lili Cheng, general manager of FUSE Labs at Microsoft Research, told VentureBeat in an interview Wednesday, and the company wants to do it with the help of developers and other chat app platforms.

“My hope is that we can do something more like search does with web pages, rather than a very closed directory that just Microsoft owns, and we kind of lean that way anyway because we support all these channels,” Cheng said.

No prospective launch date has been set for an expanded Microsoft bot directory, but Cheng said Microsoft wants to work with the bot developer community and other platforms to create a directory that includes names like Skype, Facebook Messenger, Kik, and Slack — some of the biggest chat app platforms in the world.

If Microsoft and other chat platforms work together to create a common search engine to help people find bots, it could mean that someday we see the emergence of something like a Bing for bots.

Cheng’s team is one of the most influential groups in the short history of bots on chat platforms. Her team at Microsoft Research led efforts to create Xiaoice, a bot with 40 million users in China, and Tay, the infamous Twitter bot that turned into a racist anti-Semite less than 24 hours after launch.

Microsoft Research also created the Microsoft Bot Framework, a tool kit for making bots that connects with half a dozen other platforms currently being used by more than 45,000 developers.

Cheng said she doesn’t want a bot directory for Microsoft bots alone, and that she doesn’t even want to create a directory of bots made with the bot framework alone.

A lack of discovery can create a problem for developers and businesses who want their work seen and adopted. It’s too early for the walled gardens of chat app platforms to become silos, Cheng said.

“We have this vision that bots and conversational experiences work across platforms better,” Cheng said. “We are very much in the camp of ‘Let’s share learnings and technologies and try to make these things interoperate’.”

Microsoft has thus far proven to be pretty agnostic about which platforms you can create bots for using its framework. Since its launch in April, the Microsoft Bot Framework has grown to include integrations with Facebook Messenger, Kik, and, as of two weeks ago, Slack.

Microsoft has embraced a cross-platform strategy, Cheng said, because requiring developers to build for individual platforms reduces companies’ willingness to experiment and can stifle innovation.

“You want the innovation to be in the bot you’re creating, not in figuring out how to make it work across all these different systems, so my dream would be that we could work with a lot of the other people and say, ‘Let’s standardize the way we do cards, or the way we’re understanding buttons, or the way we’re thinking about authentication mechanisms or identification’, just so people don’t have to worry so much about that.”

Sites like Product Hunt and startups like Botlist have made their own forms of bot discovery, but look at the owners of the platforms — companies like Kik, Microsoft, and Facebook — and each features a few dozen bots, most often in partnership with consumer-facing corporations. Tens of thousands of bots have already been made for each of the platforms.

In the Microsoft Bot Directory, you can find roughly 50 bots of varying skills, mostly a mashup of artificial intelligence available through Microsoft Cognitive Services, but Microsoft wants the directory to grow and extend to various platforms, not just Skype.

In informal surveys of bot developers, Microsoft confirmed that discovery is a big problem:

“One of the top issues people have is like, ‘Hey I made this bot. How am I going to get it promoted? How are people going to know? Is there some directory or categorization?’” Cheng said. “So keep pushing us, because I think that’s an opportunity for us.”

Before being acquired by Google, API.ai had easy integration into more than a dozen chat platforms. Google has not elaborated on how it wants to grow its Actions on Google platform scheduled to debut in December.

It’s true that new mediums can find new forms of discovery. Not many of us use phone books anymore; you probably use an app on a mobile device or a search engine on the web instead. Hopefully, we’ll begin to see better discovery for bots, as well, because it’s tough to expect mass adoption of bots if we can’t find them.