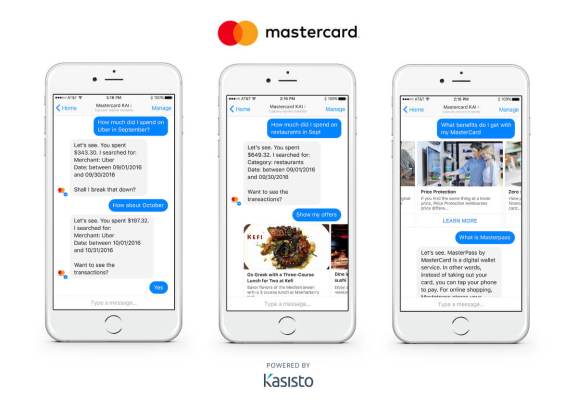 Mastercard customers in the United States will soon be able to use an A.I.-powered bot to ask more than 1,000 questions about personal finances and other subjects.

Mastercard KAI will be rolled out to U.S. Mastercard credit card and banking customers in early 2017. The bot is made by Kasisto, a spinoff of Siri creator SRI International.

Bots due out later this year will help consumers and merchants make purchases or complete transactions.

Mastercard KAI will be able to tell customers about their account history and account balance and can also make payments, identify spending patterns, and set alerts for specific kinds of spending. 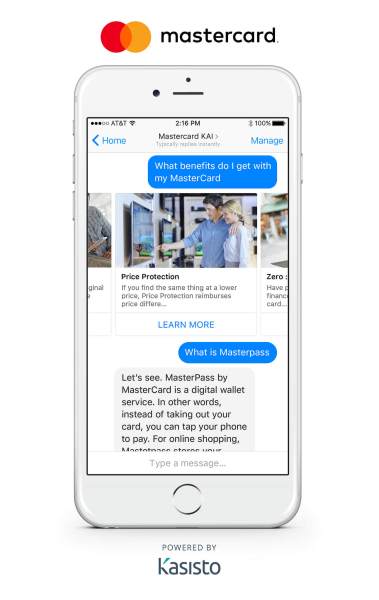 In June, Kasisto launched its A.I.-powered bot MyKAI for personal finance and KAI Banking for bank customers. Kasisto is now working with customers like the Royal Bank of Canada and DBS Bank in Singapore.

A bot commerce API set to launch by the end of the year will use the Mastercard Masterpass program to make payments and complete transactions inside messaging platforms.

According to Mastercard, the API may be used for chatbots, augmented and virtual reality (AR/VR) applications, and Pepper, the robot that will start working at Pizza Huts in Asia by the end of the year.

“Our goal is to simply plug and play solutions for the merchants that are looking to facilitate their own bots,” said Kiki del Valle, senior vice president of digital payments and labs at Mastercard. “We build the bots for both our merchant partners as well as our issuing partners, our banks, with the purpose of using chat and messaging and natural language interfaces to communicate with consumers.”

Mastercard and Kastisto are making their announcement a day after Bank of America said it plans to launch an A.I.-powered virtual assistant inside its smartphone apps in 2017.