The Singularity is the day in the future when machine intelligence exceeds all human intelligence combined. It has been heralded by futurists such as Ray Kurzweil and Vernor Vinge, and it has provided the inspiration for the investment strategy of one of the world’s most powerful men: Masayoshi Son, CEO and founder of SoftBank.

Son said so in a press briefing today ahead of his keynote speech at ARM TechCon, the annual developer conference for ARM, the U.K.-based chip design company that SoftBank bought last month for $31 billion. The press briefing was his first public appearance with Simon Segars, CEO of ARM, since the deal closed in September.

Son said that he wanted to own ARM for more than a decade, but couldn’t afford to buy it earlier. Instead, he chose to acquire Sprint in a bid to combine it with T-Mobile to take on AT&T and Verizon. But the government blocked the T-Mobile deal, and Son was despondent for awhile. However, he said he was happy that Sprint has turned itself around.

To buy ARM, Son had to amass more cash, as his company already had a lot of debt. (Son joked, “I am the king of debt.”) So he decided to sell his stakes in game companies Supercell and GungHo Entertainment, as well as his stake in Alibaba. With that money, he managed to amass the capital to buy ARM.

ARM was a much better fit with his strategic focus on the Singularity, which Son views as a “paradigm shift.”

Segers said that the business model of ARM will remain the same, and developers can look forward to a company that can invest more over time and not worry as much about short-term financial performance.

“I’m so excited about ARM,” Son said. “The basic business model has not changed. We only want to add. I want ARM partners to understand. I know there was concern that there would be change and that the business model and the ecosystem would get damaged. It’s the other way around. I would rather free up Simon and the team to go more aggressive in developing technology, deeper in relations with customers, do more R&D, and not worry about the next several quarters of earnings.”

Son compared his strategy with ARM to the game of Go, where you place black or white stones on a board. If you put stones near your base, you can protect yourself in Go. But if you place stones far away, you have a better chance to win, he said. 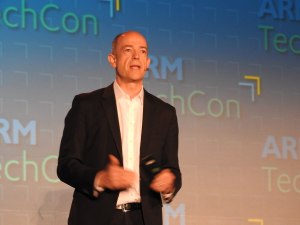 Above: Simon Segers, CEO of ARM

With ARM, there’s an immediate opportunity with the Internet of Things, or the billions of chips necessary to make everyday objects smart, connected, and sensorized. That puts the company on the road to linking the world’s chips and tech infrastructure together, to get ready for the Singularity.

Son said that he teamed up with a Saudi Arabian group to raise a $100 billion investment fund as part of a plan to move to the next stage.

“I think a big paradigm shift is coming,” he said. “The biggest theme in my view is the Singularity. I think it is coming into reality in the next 30 years. For that vision, I am exercising that strategy. $100 billion is an interesting size of ammunition. In my view, that is the beginning. My passion is bigger than many people think.”

He added, “There’s a huge dynamic change and opportunity. Many companies will be reinvented with super-intelligence coming to us. The microprocessor” is the heart of that, he said, and that’s what ARM designs.

Asked whether he thinks the Singularity could be dangerous, based on science fiction stories about artificial intelligence rebelling against humans, he said, “If you think of the history of mankind, there was fire. It’s dangerous if you misuse it. If you use it the right way, it makes mankind’s life dramatically better. It’s a double-edged sword. The Singularity in the wrong way could be super dangerous. But it will help people live longer and have more productive lives. No more accidents on the highway and so on. There are a lot of great results we can achieve with the Singularity.”

Segers added, “All of our technology we have today has made life a lot easier. The quality of life. More intelligent technology is only going to help that. We are thinking of how computing enables this intelligence.”