Yahoo Sports today released a bot named Blitz that gives fantasy football coaches advice about how to win each game.

Blitz tells you which players to start, helps you find top free agent talent by position, and draws data about the performance of a fantasy football team from your Yahoo Sports account. Blitz operates on the newly released Yahoo Bots app on iOS and Android devices, rather than on the Yahoo Messenger app, as you might assume it would. Most tech companies, including Facebook and Apple, allow bots to operate on their chat client.

“The new Yahoo Bots app brings you Blitz, along with our other bots — Yahoo Weather, Yahoo Finance, Yahoo News, and Monkey Pets — that you know and love in a single app,” members of the Yahoo engineering team said in a Tumblr post today. 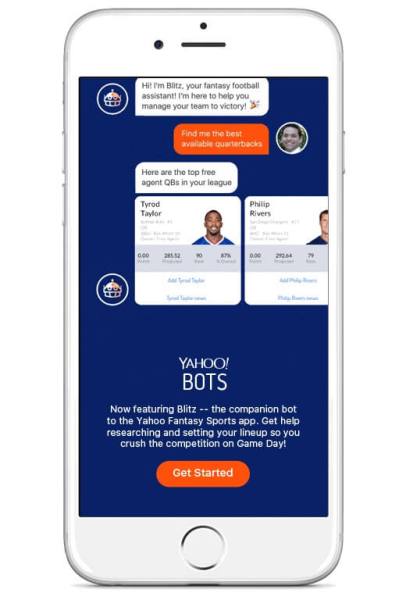 Yahoo recently released an Alexa skill to give fantasy football coaches analysis of their teams and stats for any NFL player. It can also make predictions about matchups and answer questions like, “Alexa, ask Yahoo Fantasy Football if Cam Newton will play this week?”

Microsoft CEO Sataya Nadella and NFL Hall of Famer Deion Sanders also announced plans for a Microsoft-NFL fantasy football bot. It’s not available yet, but it, too, will consider the data to help you choose the best starting lineup and will even act as a virtual general manager for you during a fantasy football draft.