Facebook has launched a tool it calls Voting Plan, which will summarize the candidates and measures you can vote for on Election Day (November 8). The social networking company has enlisted the help of the nonpartisan Center for Technology and Civic Life to ensure that every voter in the country will have a ballot specific to them and that it’s available on any device. 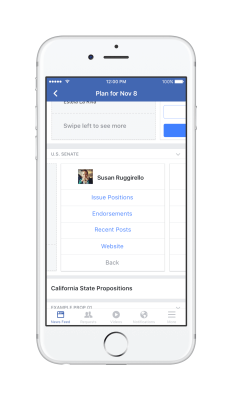 With 11 days before the end of a very contested election cycle, not only do voters have to choose between who they want to be their next president, but also about the measures and propositions that are also on the ballot. Not to mention, you have to understand who’s running in down-ballot elections such as your state senator, city hall representative, local school boards, and more.

“Not all states in America mail out sample ballots ahead of an election. This can make it challenging to find comprehensive information about the questions you’ll be expected to consider when you walk into the voting booth,” the company said in a post.

The Center for Technology and Civic Life has curated election data to help Facebook not only show you what’s on the ballot, but make it relevant to you. I’m not going to be interested in a congressional race in another district if I can’t vote in it. What’s more, if I live in San Francisco, what good is highlighting ballot measures in nearby Oakland? Facebook said it will show you the races and issues that you’ll see when you actually go cast your vote either by mail or in person.

In order to ensure there’s no bias, especially when it comes to candidates, Facebook is following a similar tactic that election officials use when creating ballots. All candidates will be presented in random order in a horizontal scroll. You’ll be able to cycle through to view their positions on issues, their endorsements, their recent Facebook posts, and their websites. 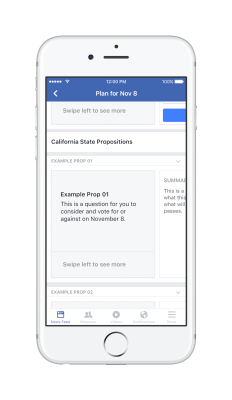 Should there be an issue with the data, the social networking company has included a way for you to provide feedback and help correct its dataset.

“Voting is the most singular expression of democracy and often the most meaningful engagement we have with our own political system, yet less than half of Americans voted in 2014. And most states don’t offer easily accessible guidance to voters before an election,” explained Facebook chief product officer Chris Cox.

Not only will Facebook tell you who or what is up for your vote, but you can view what your friends have decided. It’s likely that a major influence about who you elect could be your like-minded friends or people that you follow. However, posting publicly is your choice, so you’re not forced to display it at all.

The company’s Voting Plan tool follows with the launch of its endorsement feature, which now lets you publicly display the people and issues you back. Facebook has made a strong effort to encourage people to vote, including highlighting the presidential debates on people’s News Feed, enabling voter registration reminders, and more.