At its Office event in New York City today, Microsoft announced Microsoft Teams. Previously known as Skype Teams internally, this is the company’s answer to Slack.

The service — with Android, iOS, Mac, Windows, and web apps — is available as a preview in 181 countries and 18 languages. Microsoft is aiming for general availability in the first quarter of 2017, Office corporate vice president Kirk Koenigsbauer wrote in a blog post. Until then, customers of Office 365 Business Essentials, Business Premium, and Enterprise E1, E3, and E5 tiers can turn on the preview (IT admins can go to the Office 365 admin center, click Settings, Services & Add Ins, and then Microsoft Teams). There are no plans for a free or consumer version.

Above: Details about Microsoft Teams.

Microsoft Teams is a web-based chat service aimed at businesses and schools that have multiple teams working on various projects at once. It features channels/groups, private messages, Skype video and audio calls, Office 365 integration (Word, Excel, and PowerPoint files), OneDrive support, Power BI and Planner integrations, as well as emoji, Giphy images, memes, and so on. Threaded conversations, which Slack sorely lacks, are included in Microsoft Teams.

The app is “designed to facilitate real-time conversations and collaborations while maintaining and building up that institutional knowledge of a team,” Microsoft chief executive Satya Nadella said at today’s event.

After waxing poetic about the way that teams of athletes and musicians work together, Nadella presented Microsoft Teams in the context of other collaboration tools, including Yammer, Skype for Business, and Groups in Outlook, not to mention SharePoint. Until this point, Yammer was Microsoft’s obvious team communication tool that most directly competes with Slack, but after almost three years of Slack growth, Microsoft is now shooting more directly at the San Francisco startup. 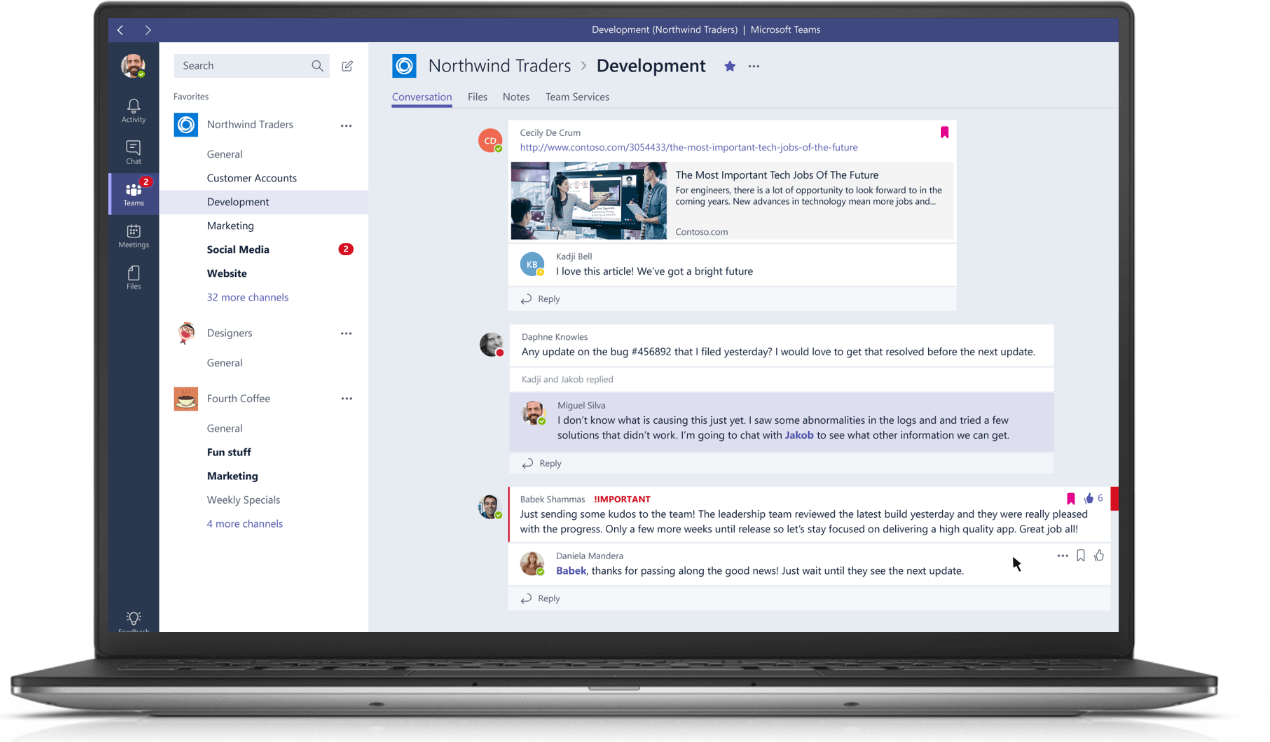 Slack is firing back today with a full-page New York Times ad containing a letter to Microsoft. “We’re genuinely excited to have some competition,” Slack says. It’s interesting to recall that Microsoft once considered acquiring Slack for as much as $8 billion, as TechCrunch reported earlier this year, citing an unnamed source.

One of Slack’s hallmark features, bots, will also be part of Microsoft Teams. The service is integrated with Microsoft’s Bot Framework.

When Microsoft Teams becomes generally available, it will have more than 150 integrations, including Asana, Hootsuite, Intercom, and Zendesk, Koenigsbauer wrote. Others include Polly.ai, Meekan, Workato, Statsbot, Careerlark, Hipmunk, Zapier, Zoom.ai, Growbot, and Busybot.

In terms of security, Microsoft Teams supports two-factor authentication, single sign-on through Microsoft’s Azure Active Directory service, and encryption of data in transit and at rest. The service is hosted in Microsoft’s data centers. Microsoft did not say anything about a way to deploy it in companies’ on-premises data centers, which would be a significant point of distinction from Slack.