Intel has acquired the virtual reality startup Voke as the chip maker moves deeper into the immersive sports market. Voke gives Intel the ability to broadcast live events in VR.

Transforming sports and spectating with digital technology is one of Intel’s strategic initiatives. So this deal fits with Intel’s larger efforts to use augmented reality and VR to enable new perspectives in viewing sports and improving experiences for both audiences and athletes.

“Sports is being revolutionized by data and the ability to capture, connect, analyze and interact with it,” said James Carwana, head of Intel Sports Group, in a blog post today. “We call this the digitization of sports. At Intel, we’re building a broad portfolio of best-in-class solutions to deliver new, immersive sports experiences for athletes, fans, and content producers.”

Voke’s platform gives everyone the opportunity to enjoy fully immersive virtual reality experiences of live events no matter where they are. With one livestream, Voke delivers VR directly to fans in multiple formats, including True VR for headsets, 2D immersive content for mobile devices, and 180-to-360-degree feeds for the web. 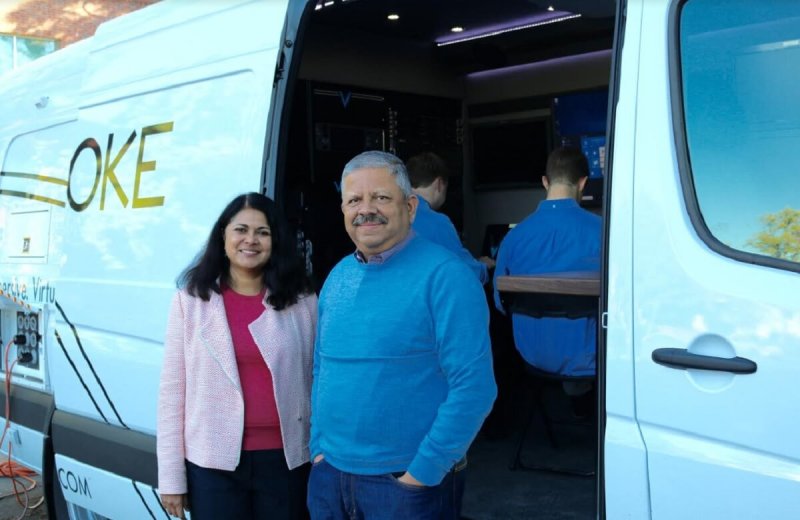 Intel’s sports initiatives include creating new digital broadcasts at events like the X-Games in Aspen and the NBA All-Star Weekend earlier this year and acquiring the startup Replay, which produces digital instant replays of sports events.

“Virtual reality (VR), or what Intel CEO Brian Krzanich has stated as ‘merged’ reality, is an important building block for delivering a truly immersive sports experience, one that uses computing power to deliver virtual-world experiences more dynamically and naturally than ever before,” Carwana said. “Imagine being able to witness a slam dunk from the defender’s perspective or the defensive rush from the quarterback’s perspective. This kind of experience may sound futuristic, but it’s closer than you think.”

Founded in 2004 and headquartered in Santa Clara, California, Voke has technology that lets fans be where the action is without ever leaving their living rooms, as Carwana put it. Intel is an investor in Voke, which is headed by CEO Jay Jayaram, who cofounded the company with Uma Jayaram.

“We are extremely proud of the success we have had thus far and it has led us to this game changing moment for live event virtual reality,” said Jay Jayaram in a statement. “By combining our best in class TrueVR technology platform with Intel’s technologies and commitment to building unprecedented user experiences, we plan to completely change the way fans engage with and experience live events.”

Voke uses a proprietary paired lens, stereoscopic capture system to provide a natural view of the action, allowing fans to see realistic proportions and depth wherever they look. Fans can use it on multiple platforms such as PCs, tablets, smartphones, and VR headsets. The tech integrates into existing broadcaster and league channels.