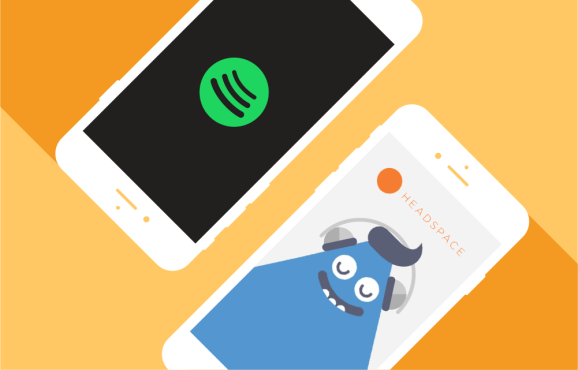 Spotify has offered a glimpse into its future plans to grow its subscription base — combined subscription bundles with third-party services.

The music-streaming giant has announced this morning that it’s joining forces with online health platform Headspace to offer customers access to both services for the equivalent of €15 (around $16.50) a month. Given that Spotify and Headspace subscriptions normally costs €10 per month each, this works out to a potential savings of €5 each month.

Founded out of Santa Monica, California in 2010, Headspace provides guided meditation sessions and “mindfulness training” and is designed to help people live a “healthier, happier life.” The company has raised around $40 million in funding and counts some notable backers, including musician Jared Leto and LinkedIn CEO Jeff Weiner.

The new joint subscription is only available to those in Sweden, Norway, Finland, and Denmark for now, with the U.K. and the Netherlands following shortly. But this offers interesting insight into some of the channels Spotify is pursuing as it looks to boost its paying members beyond 40 million, which is around 40 percent of its overall user-base.

Spotify and Headspace are not only offering a single bundled subscription, they’re also letting users log in with a single set of credentials — this is a tight-knit integration. In reality, this means that existing Spotify Premium users can add Headspace onto their subscription plan and create a Headspace account using their existing Spotify log-in details, but it won’t work the other way around — Headspace users cannot sign up to Spotify with their existing credentials.

It’s also worth noting here that the companies’ respective services won’t be crossing over — you won’t be able to listen to Spotify within Headspace, and Headspace won’t give you direct access to your Spotify playlists.

“Through our partnership with the world’s leading meditation platform, we’re creating a new and exciting pairing of premium services, with the collective goal to deliver more music and mindfulness to the world,” said Alex Norström, chief premium business officer at Spotify, in a statement.

This isn’t the first time Spotify has been bundled in with other services, but it has generally been offered as part of a mobile phone or cable TV subscription. The partnership with Headspace is the first time Spotify has offered such a tightly integrated offering, though admittedly it doesn’t seem like an obvious tie-up on the surface. What would perhaps make more sense moving forward would be for Spotify and Netflix, for example, to offer a joint subscription with a small discount.

Though Apple Music recently passed 17 million paying subscribers, Spotify is still the on-demand music-streaming market leader with around double that number, and, unlike Apple, it is continuing to use an ad-supported free tier to lure new subscribers on board. But Spotify is clearly also pursuing other avenues as it looks to bolster its monthly subscriptions — yesterday it acquired Preact, a startup that helps companies acquire and retain subscribers. And now it’s pursuing deep partnerships with other services to sweeten the deal for new members.