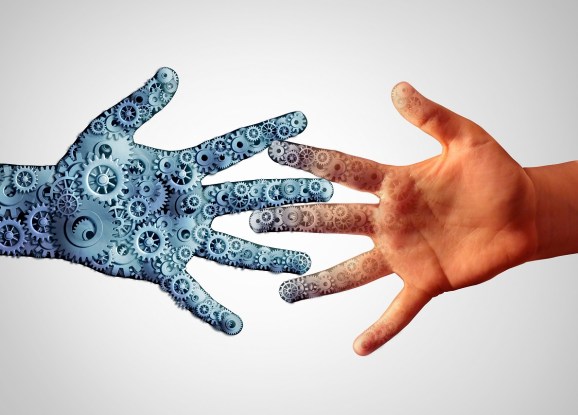 If you’re a whip-smart investor with big bucks to spend, chances are you’ve got your fingers in the AI pie.

It’s a market where $50 million is chump change, so if you really want to play with the high rollers you’ll need more room on the check.

Sentient’s up to $144 million in an AI platform play, while Vicarious Systems has thrown $67 million at AI algorithms.

So it’s pretty fair to say that if you’re a bot, you’re going to enjoy a top-notch private education.

But why now? What’s made machine learning and AI the hot stuff du jour?

It’s a game changer, that’s what.

AI and machine learning are about process optimization, but taken to the extreme.

The more they learn, the smarter they get and the more they’re going to utterly disrupt the economics of the world as we know it.

But first they’re going to disrupt the economics of software development.

It won’t be long until a project that currently takes a full year of work and a team of 6-10 devs can be compressed to a couple of months.

And that’s just to start. Because while humans are pretty well optimized, machines are just getting started.

Skeptical? Sure. But we’ve seen it before with the first industrial revolution. And that was when machines weren’t so bright.

Now they’re smart enough to put whole teams of devs – and all the teams supporting them — out to pasture.

No longer. Machine learning can automate all of this. Those databases can now run on AI power alone thanks to models primed to identify ticker patterns or news relating to a publicly traded company.

The fact is, if it’s repetitive, process based, and involves large amounts of data, it’s a prime target for machine learning.

And let’s face it – those are the kinds of problems developers are targeted with solving.

After all, good developers are the ones who are lazy at heart. They want to solve a problem once, not multiple times.

And machines are crafted for efficiency. They’re born pattern recognizers and problem solvers.

And given enough time and enough maturity, we’ll be seeing systems that possess near-human intelligence in narrow domains.

That’s a lot of smarts for a lot less money than it would take to hire a team of crack developers. Which is why investors are throwing money at machine learning like there’s no tomorrow.

Because they see the tomorrow – and it’s one that involves a ROI that humans just can’t offer.

Sure, there’ll be road bumps.

Machines are as left-brained as they come, and some problems are fuzzier, messier, and broader than machines can currently handle. Finding a way to solve those right-brain problems – the ones that require logical leaps and creativity – is where the real opportunity lies.

Because when we’ve done that? We’ve cracked the secret to our own humanity. We’re still figuring our how own brains work, so recreating them is going to be a challenge we might not yet be up for. But the lure of that is pretty spectacular.

There’ll be massive failures. There’ll be efforts to solve the unsolvable. We’re betting that companies that build out toolkits to improve the accessibility and usability of AI will be some of the first winners in this field. Helping data scientists all over the world make use of AI to solve individual problems in specific domains will be one of the first places the economic value becomes apparent.

This, of course, is only the beginning. Data exchange between these models will further accelerate the usefulness and cost effectiveness of this AI. When it all comes together, there’ll be successes that will change the very fabric of our economy – and how we see and do things. Smart investors see it. They’re willing to gamble on the failures because they see the game changing potential of the successes.

But let’s face it – putting ourselves out of a job is utterly worth it for the future that could be.

With a tireless, dedicated genius working with us on solving problems, we can turn our attention to the more rewarding, inalienably human bit: defining them.

Jeff Catlin is CEO of Lexalytics.