When Android TV was introduced to the world back in 2014, the new TV-focused operating system wasn’t packaged as a new entertainment platform as such, but more of an upgrade to its old (failed) Google TV initiative. It sought to bring cohesion to Android content across devices.

“We’re simply giving TVs the same level of attention phones and tablets have had,” explained Android director of engineering David Singleton at the launch.

Over the past couple of years, Android TV has arrived on a number of smart TVs and set-top boxes — including the now-discontinued Google Nexus Player — as Google strives to ensure its presence extends beyond your mobile devices into the centerpiece of your living room.

Though Android TV has generally been well received, it has yet to make a big splash, and it could even be argued that Google is fighting an uphill battle against another of its own TV-focused products, the Chromecast. Last month, however, China-based technology giant Xiaomi launched an intriguing product in partnership with Google, representing Xiaomi’s first ever product launch in the U.S.: the Mi Box, an Android TV set-top box (STB). The contraption essentially brings all the goodness of Android to your TV, and includes music- and video-streaming services such as Netflix, Spotify, YouTube, and Google Play, and crucially it supports 4K-quality video and HDR. Throw into the mix the $69 pricetag, and Xiaomi’s first foray into the U.S. TV market seemed like a pretty tempting proposition.

VentureBeat has gotten its proverbial mitts on the Xiaomi Mi Box, and here are our thoughts on the device and whether it’s worth 69 of your hard-earned dollars.

For those interested in the specs, the Mi Box packs a quad-core ARM Cortex-A53 2.0 GHz processor, 2GB of RAM, 8GB of flash storage, and comes with Android 6.0 Marshmallow out of the box. 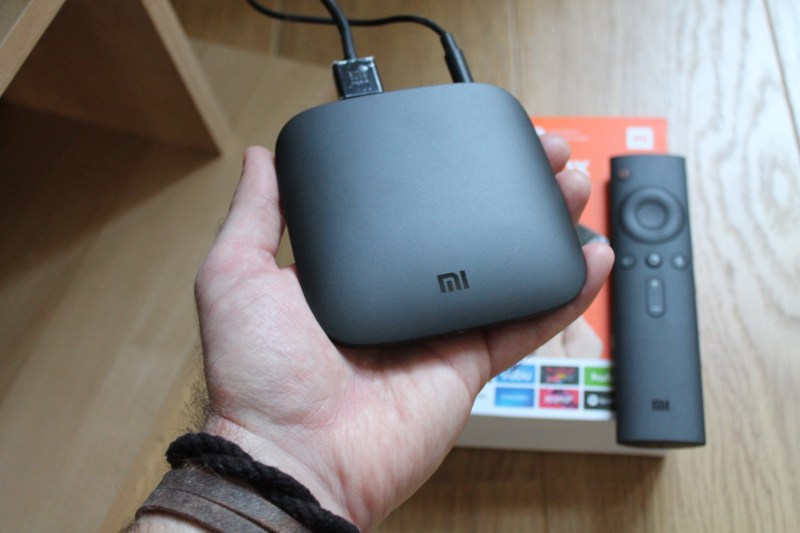 There are just a handful of ports on the back of the Mi Box: a power adapter port, HDMI port (HDMI cable is included), USB 2.0 port, and 3.5mm audio output port.

Unfortunately, there is no micro USB port to power the box off a USB connection on the TV as you can do with a Chromecast, so you will need to power this from an electrical outlet. 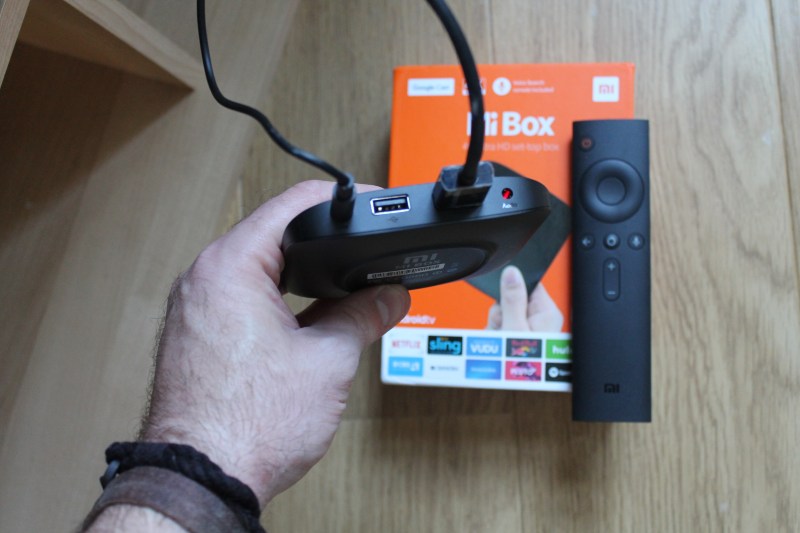 Thankfully, the Mi Box remote, which connects to the Mi Box over Bluetooth, isn’t saturated with buttons and is fairly straightforward to master.

There is a power button, the familiar Android “back” and “home” buttons, a directional control pad with a “select” button in the middle, a volume up/down button, and a button to action voice commands.

Powered by two standard AAA batteries, the remote connected flawlessly with the Mi Box during the initial setup, and worked without interference at all times. 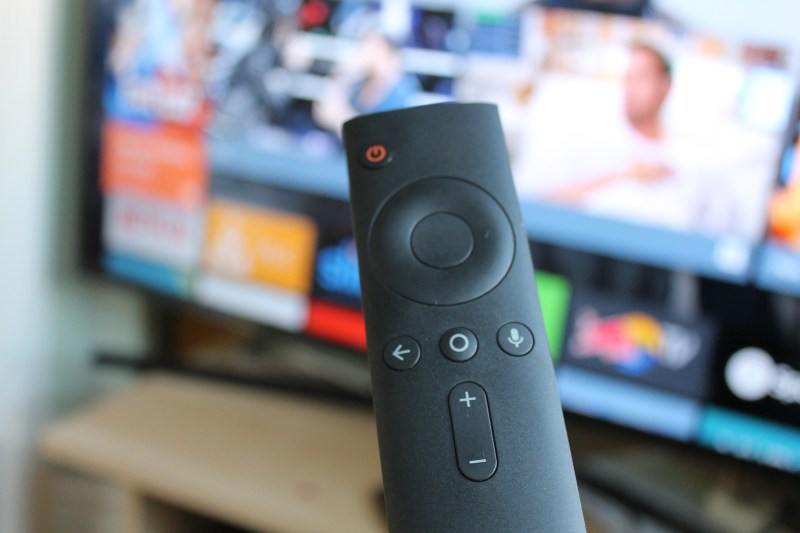 Setting up the Mi Box is a breeze, and the on-screen guide walks you through the process of connecting the device to your home Wi-Fi.

The Mi Box interface, much like other Android TV devices and smart TVs in general, is media-focused with a bunch of suggested apps popping up to get you started, including Hulu, Netflix, HBO Now, and Spotify. 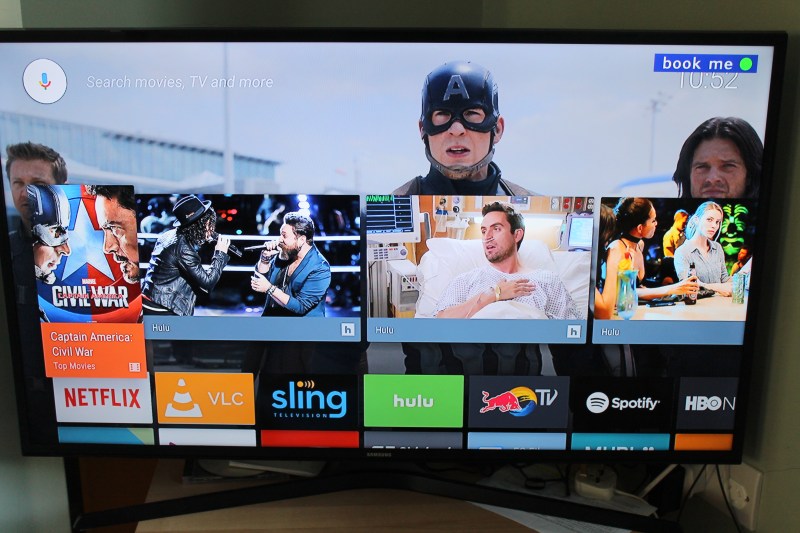 As a slight aside here, the Mi Box does allow you to edit the homescreen, thankfully, meaning you can hide apps that are of no interest to you, or shift things around a little to prioritize ones you’re likely to use more often. 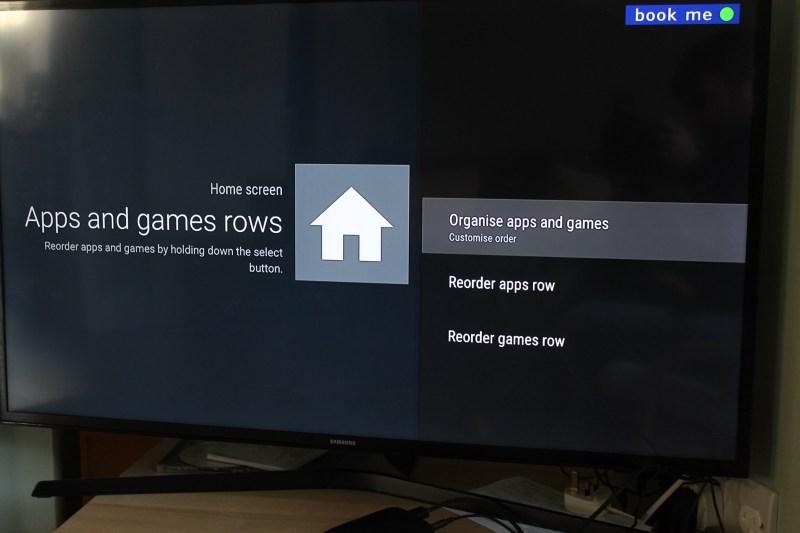 The voice-search feature on the Mi Box was pretty good, and for those not hooking a Bluetooth keyboard up to the device, that’s a godsend compared to the fiddly nature of using a remote to manually type in search terms through the on-screen keyboard.

Simply tap the microphone button on the remote, and the TV screen will let you know that it’s all ears. 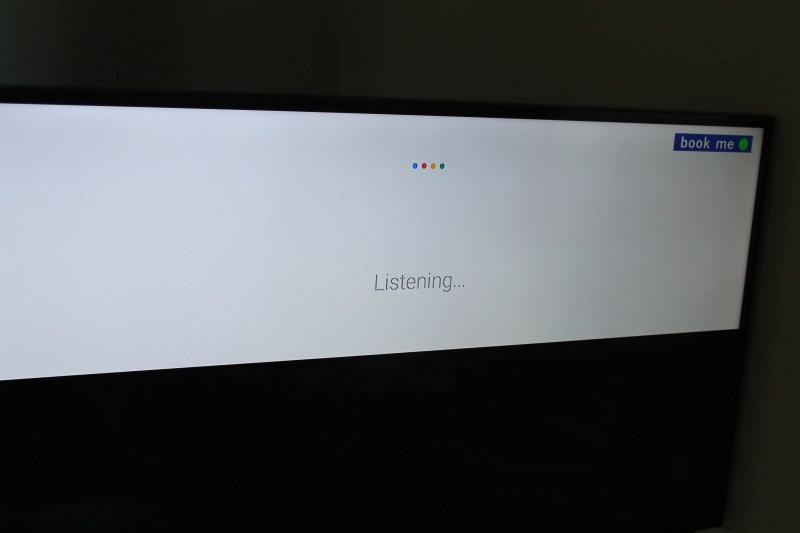 You can then say something fairly generic such as “the latest action movies” or “funny films,” and the Mi Box will tap the smarts of natural-language processing (NLP) to serve up a bunch of comedies to watch. 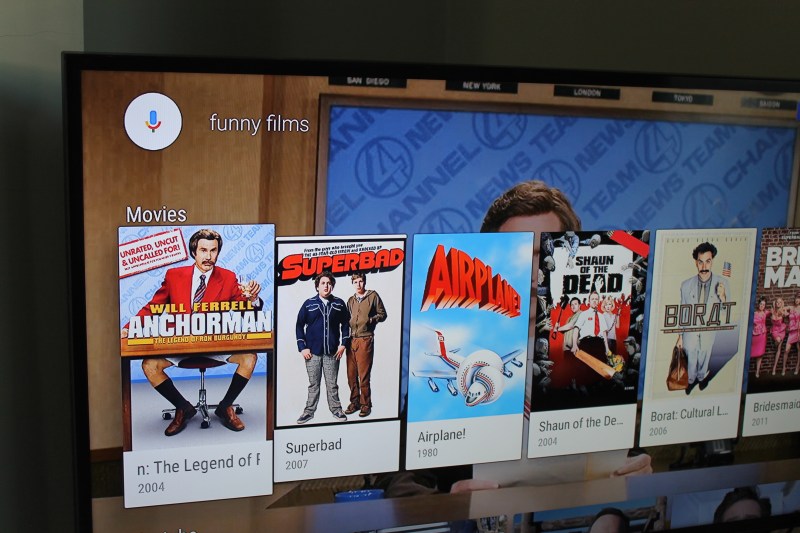 Equally, you can say something like “film suitable for children”… 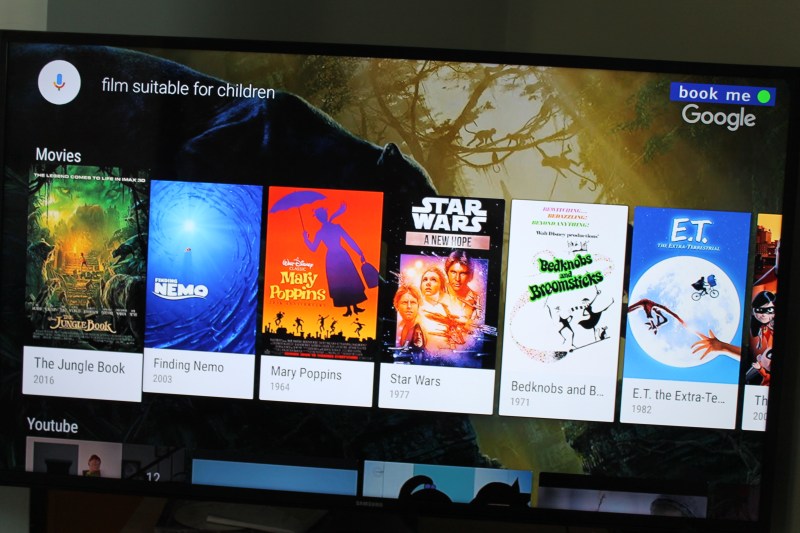 Above: Suitable for children 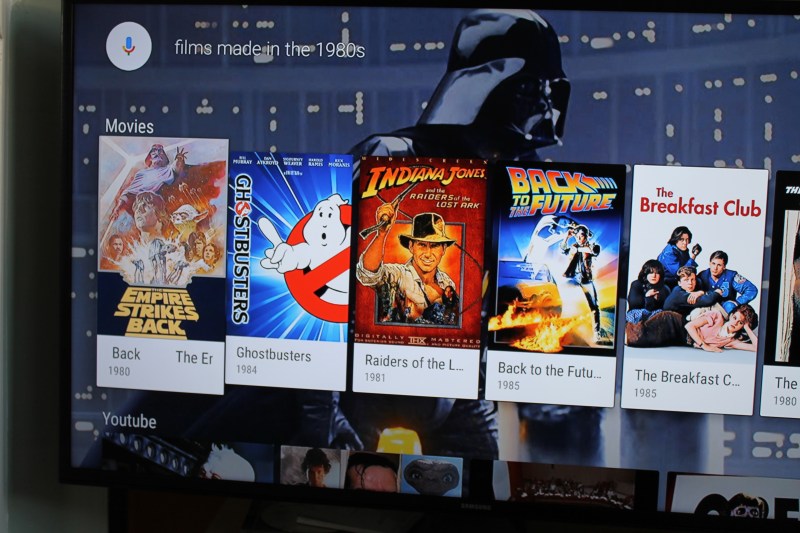 Voice commands can also be used for general web searches, including news and weather forecasts, meaning the Mi Box takes on the role of a sort of smart assistant for your living room, though admittedly it’s not quite on a par with something like Amazon’s Echo, which integrates with a myriad of smart home devices.

The Mi Box launch was packaged as a partnership between Xiaomi and Google, a signal that Google is striving to ensure consistency in design and usability across the board. This is a good thing for sure, but it’s worth noting here that this tight control also means that the Android TV Google Play Store doesn’t have all the apps you’ll be used to on Android elsewhere.

Indeed, there are specific requirements a developer must adhere to when making their apps available for TVs — they can’t simply port a tablet app over to the TV realm, even though the underlying structure is the same. The way a user interacts with a TV interface is different to that of a mobile device, with remote controls, keyboards, and mice — rather than fingers — the more common input device. Moreover, a TV viewer may be situated a considerable distance from the screen, so the interface must reflect this.

In short, if you’re on the hunt for an Android TV device, such as the Mi Box, thinking that it serves up the same access to the Google Play Store as your Samsung Galaxy S7, then you’ll be disappointed. The selection of games and apps is still fairly limited, and those hoping to find Amazon Video nestled in nicely alongside Netflix will be particularly disappointed.

For the more technically minded, there are alternative ways to install Android apps beyond that of Google Play. You can extract an app’s APK file to a remote disk such as a USB stick and sideload it onto Android TV in a similar way as you would with an Android phone or tablet. 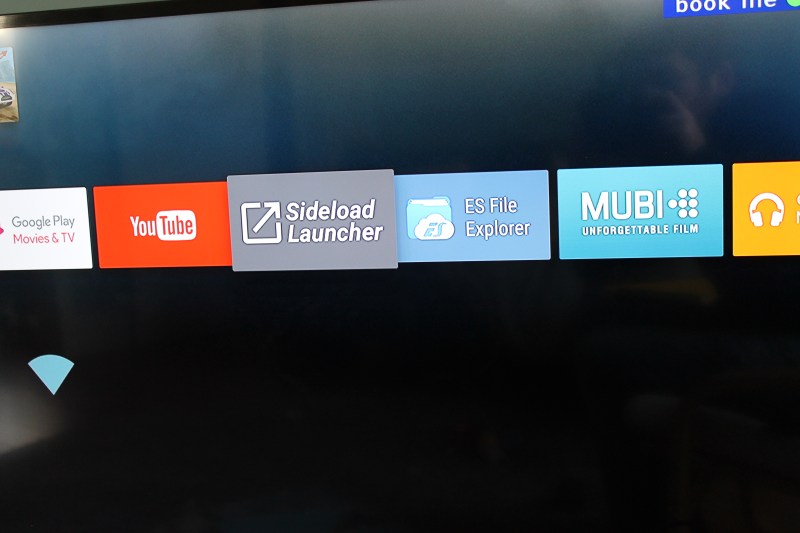 Having used the Mi Box for a few weeks, I was generally impressed with the device’s capabilities, particularly for the $69 price tag. For those already signed up to the Android ecosystem on mobile, it offers an affordable conduit to replicate much of the experience on their big-screen TV.

There are many comparisons to be made between the Mi Box and other similar devices, including the Nvidia Shield Android TV console. But weighing in at $200, and with a focus on gamers, the Shield has its sights firmly set on a particular audience.

Moreover, given that people are increasingly turning to smart TVs with apps already built in, there will be limited desire to procure an Android TV device if all someone wants is access to the popular video-streaming apps. And gamers would likely look elsewhere (for example, the Nvidia Shield).

For the price, the most obvious comparison for me is actually Google’s Chromecast. While the existing incarnation costs a mere $35, the upcoming turbo-charged Chromecast, launching later this month, costs exactly the same as the Mi Box. And it will also support 4K content.

I would see little incentive to upgrade to the Mi Box from my current second-generation Chromecast… if it wasn’t for the fact that the Mi Box supports 4K streaming. That is a mighty tempting proposition, but as noted already the soon-to-launch Chromecast v 3.0 will support 4K too.

So what’s the better option of the two?

Chromecast has no screen-based interface and it has no remote control — it requires a mobile device to be present at all times to control the on-screen action. With a dedicated remote control, a proper interface that everyone in the room can see, and pretty nifty voice-command smarts, the Mi Box feels like a more natural device for the living room, one that visitors and the whole family can use. Then there’s this little nugget: The Mi Box has Google’s Cast technology built in, meaning this is basically a Chromecast and Android TV box combined into one. 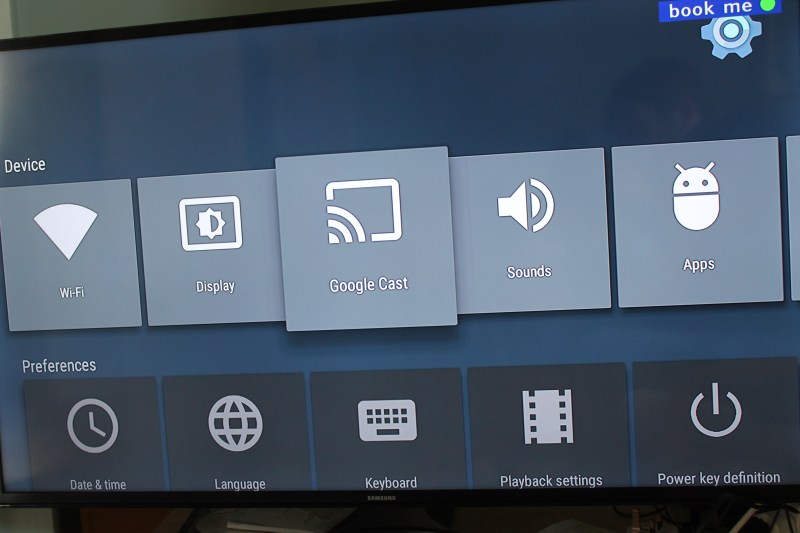 With the Mi Box, Xiaomi has a compelling device that targets a mass-market audience with an affordable price. Whether it’s the right device for you really depends on your current TV arrangement and what you’re looking for.

If you’re already on the hunt for a device to turn a standard non-smart TV into something with a higher IQ, then the Mi Box is certainly worth your money. But for those who already have a smart TV as a centerpiece in their lounge, be it a Sony Bravia or a Samsung, I just don’t see enough of a pull with Android TV in general to merit paying $69 to “upgrade.”

The same goes for those with a Chromecast or Roku plugged into their TV — there aren’t enough extras here to justify adding another device to your living room setup. But if you want 4K streaming and a more family-friendly interface, then it’s worth the investment.