Silicon Valley companies have made a big push to diversify their workplaces in the past few years, but a new study of women in the employee ranks shows that progress has been gradual. Women are 19.6 percent of the staff of the top 25 tech companies, according to a study by hiring firm HiringSolved.

Using artificial intelligence to scan through its databases, HiringSolved found that the biggest tech companies have a long way to go to reach parity in terms of women as a percentage of the workforce and the general population. Companies like Intel have made a big push, but the results are just beginning to show change, as Intel went from 26.4 percent women in 2015 to 26.7 percent women in 2016, according to HiringSolved’s data.

“Ever since Google released its employee demographic figures in mid 2014, other tech giants like Yahoo and Twitter quickly followed suit. Once these stats became public, the genie was out of the bottle for good — and it became all anyone could talk about,” said Shon Burton, CEO of HiringSolved, in the report. “Afterwards, most of these companies quickly announced public initiatives to combat their employee diversity challenges, acknowledging the problem and ideally, offering a solution.”

HiringSolved said that “one-dimensional ways of hiring and sourcing talent are no longer fit for purpose.”

The method ins’t foolproof. HiringSolved uses its own proprietary artificial intelligence software that identifies gender, ethnicity, and age based on public resumes and social profiles. But I noticed in a draft report that the company said that Nvidia had zero women in the C-suite. In fact, the company’s chief financial officer, Colette Kress, is female, with a clearly female name. So you can take that into account. (After we noticed that, they fixed the chart below). 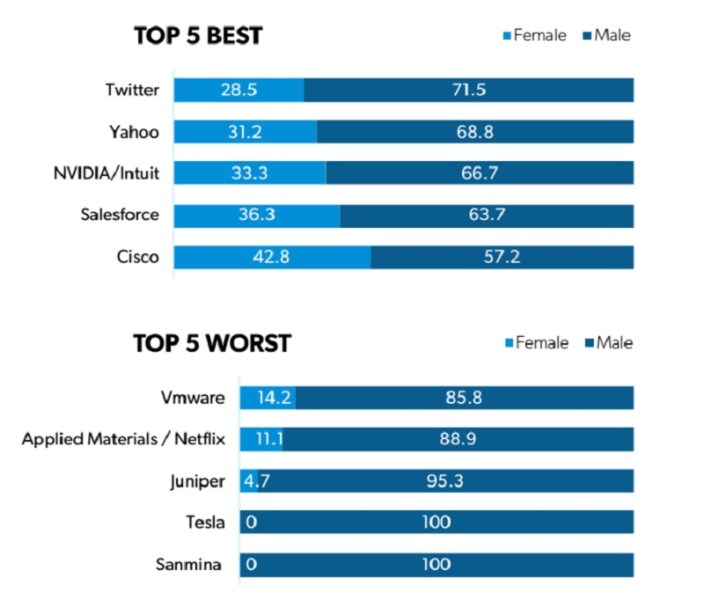 Above: The best and worst female representation in the C-suite for the top 25 tech companies.

“What we found is that slowly but surely, the average number of female employees at these organizations are on an upwards trajectory, with Google, Netflix, Intuit, Ebay, and Twitter leading the pack. Perhaps there was something to those public diversity initiatives after all,” Burton said.

HiringSolved’s proprietary artificial intelligence/machine learning system lets the company sort and classify objects in a picture as part of the analysis of diversity. The factors for analysis include resumes, social profiles, names, locations, social graph data, and more. The companies analyzed are in the chart below. In the C-suite, Yahoo led the pack with 41 percent females, including CEO Marissa Mayer. Nvidia and Western Digital were classified among the worst (but as we noted, we know there’s one error there with Nvidia). Intuit and Sanmina were tied at 33.3 percent female in the C-suite. 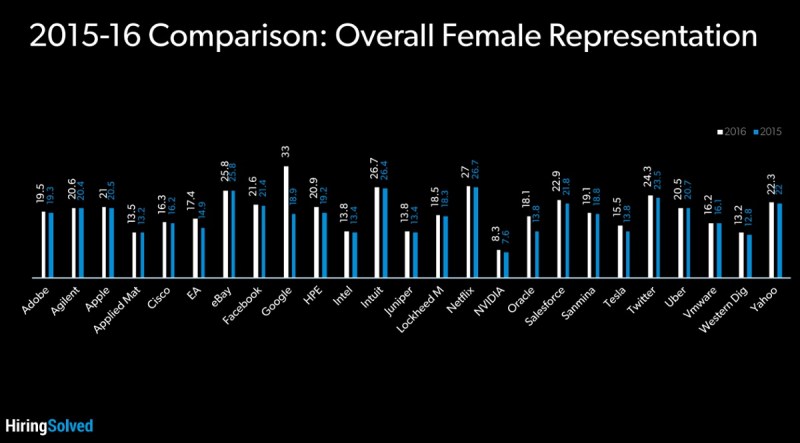 Above: The percentage of women at the top 25 tech companies.