If you want to see the future, look to the patent office. Google recently published the full text of a patent for a contact lens that can monitor blood glucose and dispense insulin automatically, while Samsung patented a contact lens with an integrated camera just a few short weeks ago.

The next great wave of tech innovation may come in the form of the one of the most intimate of all wearables: contact lenses. We’re not quite there yet. Smart glasses and Snapchat Spectacles will continue to dominate the vision-tech front in the short term. But the golden age of research in contact-lens technology has officially begun.

As CEO of some of the world’s largest online optical companies, I can say that contact lenses are poised to get a dramatic overhaul. Here’s a look at innovations, both in the near term and further down the road, that are leading us toward the fabled “smart” contact.

Taking lens technology to the next level

Since mass-produced contacts first emerged in the 1970s, advancements have come mainly in the form of thinner, softer, and cheaper lens materials, most notably silicone hydrogel, which allows more oxygen to reach the cornea. Contacts are now more comfortable than ever (and even come in colors), but their actual functionality hasn’t changed.

In many respects, traditional manufacturers have been content to play it safe, sticking with a high-margin business even as Lasik and other new technologies have eaten into their share of the market. Still, contacts account for a more than $10-billion-a-year business, with more than 100 million wearers around the globe.

That rate of progress is about to take a major tick upward, however, thanks to advances in materials science. The first major innovation, currently in the works, is a material that will increase by roughly 30 percent the amount of time a person can safely and comfortably keep a contact lens in their eye. This translates to better and more useful lenses in the short term and also allows us to imagine much more ambitious features going forward.

For instance, the military is already interested in building night-vision contact lenses for use by special forces. They are backed by very real science, using the wonder-material graphene to detect light well into the infrared spectrum and fit a traditionally large detector into a tiny contact lens. The actual amount of light amplification they could provide is fairly low at present but hints at future potential.

Alphabet (or rather, Alphabet’s life sciences subsidiary Verily) is certainly thinking past just advanced contact-lens materials, as it’s already produced working test units for a medical e-contact lens. Yes, the team formerly known as Google X has managed to produce a contact that can control a blood-glucose monitor embedded in a prescription lens. It wirelessly sends and receives data and power and can automatically trigger the release of insulin. That sort of intimacy with the wearer could also allow an e-lens to monitor common eye-health issues like macular degeneration.

Displays under your eyelid

But the true long term potential for the contact lens — the Holy Grail that major players are feverishly pursuing — is as a display. This kind of display would track to the movement of your eyeball, layering an image over your regular vision for an even more seamless experience than Google Glass can provide.

Full-fledged contact lens displays have actually been in the works for years. In fact, this is a contact lens display, working, back in 2009. It powers and controls a visible array of 64 pixels, safely, in a living eye, in a surface area smaller than one side of a penny. These pixels are “active,” meaning they project light. But a more efficient approach would to use “passive” pixels, which simply alter light that’s already incoming from the environment. That saves on power and reduces possible strain on the eye.

VR and early smart glasses are already showing us a few things we could do with those pixels. Indeed, as augmented reality matures alongside contact lens technology, some truly fascinating possibilities open up. Armed with built-in cameras and displays, contacts could ostensibly become the ultimate AR platform, far more versatile and immersive than current goggle-based technology. Interestingly, major companies are already investing in the ability to develop iOS apps compatible with contact lenses, hinting at the future potential. 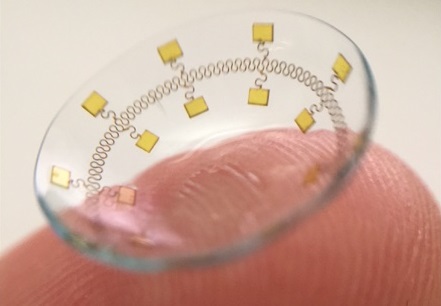 One caveat: Tech timetables are notoriously fluid and I’m not an expert in advanced electronics or contact lens engineering. But I can say with confidence that the optical market is shifting its focus toward developing achievable products for commercial release. While the legacy optical industry has been fairly slow-moving, tech players like Google and Samsung are giving contacts a much-needed push. Much of the needed technology exists or is in development. Consumer demand for wearables like glasses is growing. This much is clear: Contacts with screens, cameras, and even apps won’t remain science fiction for long.

Roy Hessel is the founder and CEO of EyeBuyDirect, an online retailer of prescription eyewear. The ideas in this article are his personal views and do not necessarily reflect those of the company. Follow him on Twitter: @RoyHessel.