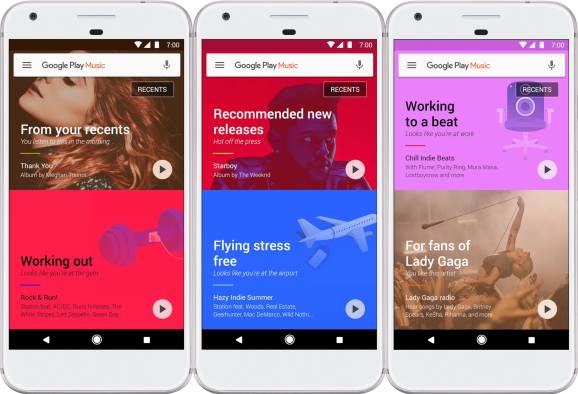 Google today is announcing an overhaul of its Google Play Music streaming app for Android, iOS, and the web.

“Your workout music is front and center as you walk into the gym, a sunset soundtrack appears just as the sky goes pink, and tunes for focusing turn up at the library,” Google Play Music lead product manager Elias Roman wrote in a blog post.

This lines up with an industry-wide trend of attempting to provide music that’s perfect for your situation. No other music streaming app — like Spotify or Apple Music — currently offers anything like this. It’s a higher level of personalization than many people are used to, and it’s possible because Google already knows where you are, so long as you allow it to know that information.

But Google isn’t exclusively reliant on algorithms to suggest music. Recommendations that appear at the top of the app’s redesigned home screen are “powered by Google’s machine learning systems and honed by our team of expert music curators,” Roman wrote, and the recommendations will improve as time goes by and you use the service more. Not that the human touch is new; human-generated playlists became more prevalent in the app following Google’s acquisition of Songza in 2014.

Also new: If you’re a subscriber — a free tier lets you listen to stations, but you can choose individual songs to play and get rid of the ads if you pay $9.99 a month — the app will automatically make you a playlist that’s available to play offline “based on what you’ve listened to recently,” Roman wrote. You don’t have to download the playlist in advance. (This feature can be disabled.)

The new additions amount to thoughtful improvements on an app that Google doesn’t update all that often. This particular update is timely because Google Play Music is the default streaming option for the Google Home speaker that recently went on sale. It’s also free to use on Chromecast devices, such as the newly released 4K Chromecast Ultra. And it ships with the Google Pixel smartphones that came out last month. In short, this is a good time for Google to make sure that its standard-issue music app is appealing enough that users don’t bother to install alternatives.

Google Play Music’s library contains 35 million songs. Google has not talked about how many users the service has.