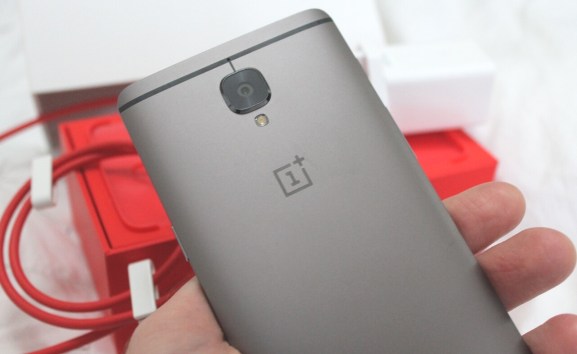 The year 2016 has ushered in a number of great flagship smartphones, such as Google’s new Pixel line, Samsung’s refreshed Galaxy S7 duo, Apple’s upgraded iPhones, and the slightly-more-under-the-radar offering from OnePlus, which introduced a fantastic premium phone to market back in June.

All the aforementioned devices are broadly comparable in terms of specs — sure, some may have slightly better cameras or a higher resolution display or more onboard storage, but each of them deserves to be tagged “premium” or “high-end,” and each brought its own unique perspective on what a 2016 flagship should look like.

Fast forward five months, and OnePlus elected to release a slightly better version of the OnePlus 3 called — wait for it — the OnePlus 3T. Why the “T”? “Because ‘T’ is one more than ‘S’,” explained OnePlus cofounder Carl Pei, in a not-so-subtle reference to Apple’s typical use of the letter “S” in its iPhone branding.

The thing that surprised many about the 3T was that OnePlus had already garnered rave reviews for the OnePlus 3, and it was a significant step up from the previous OnePlus 2. The OnePlus 3T felt like a wholly unnecessary launch, when the company could’ve just held off for another eight months and dazzled the world with the ultimate “flagship killer.”

So why launch the 3T now?

“We always want to make the best products possible,” explained OnePlus cofounder Carl Pei at last week’s launch event. “We have been making updates to the software experience on a regular basis, but you can only take software updates so far. Our team has also made important hardware improvements, and we didn’t want to wait another full cycle to bring them to our fans.”

While the OnePlus 3T brought some new software smarts to the table, it was the hardware element that really intrigued us. For the first time ever, OnePlus had brought a 128GB device to market — all previous versions had been either 16GB or 64GB, with no room for an SD card. For speed demons, the upgraded device also sports the newer Qualcomm Snapdragon 821 processor (2.35 GHz) — similar to Google’s Pixel — promising increased performance without compromising on power efficiency.

Throw into the mix a larger, 3,400 mAh battery (a 13 percent increase on the previous phone’s battery) and a 16 megapixel front shooter (double the specs of the OnePlus 3), and it would seem OnePlus has gone to great lengths to address any lingering concerns that the company’s phones shouldn’t be bundled in among its big brand counterparts.

In a sign that OnePlus wants the 3T to be its new flagship, the company has now stopped selling the OnePlus 3 in many markets. But to reflect the improved specs, it has adjusted the pricing accordingly, with the 64GB version priced at $439 and the all-new 128GB machine setting you back $479 — still, that’s a notable 45 percent cheaper than the 128GB versions of the Google Pixel XL and iPhone 7 Plus.

VentureBeat has been testing one of these puppies for the past week to garner some first impressions and see whether it’s worth the upgrade. 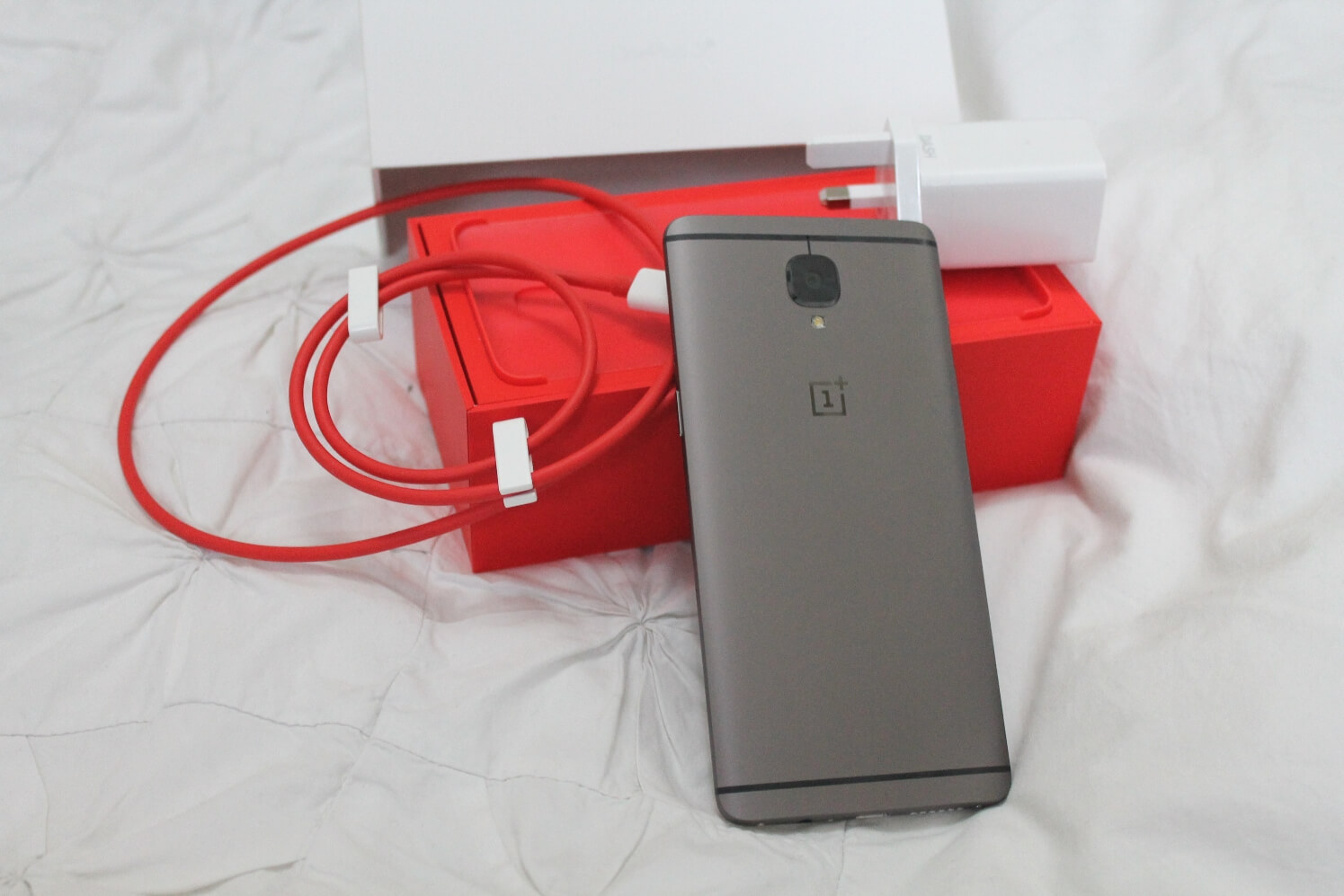 Above: OnePlus 3T: In the box

Out of the box you get a OnePlus 3T phone (natch), a dash-charging cable, and a plug to connect the device to an electrical outlet.

From a look and feel perspective, the OnePlus 3T is identical to the OnePlus 3. However, there is a snazzy new gunmetal gray color variant, which does look great, and there is also a soft gold alternative. 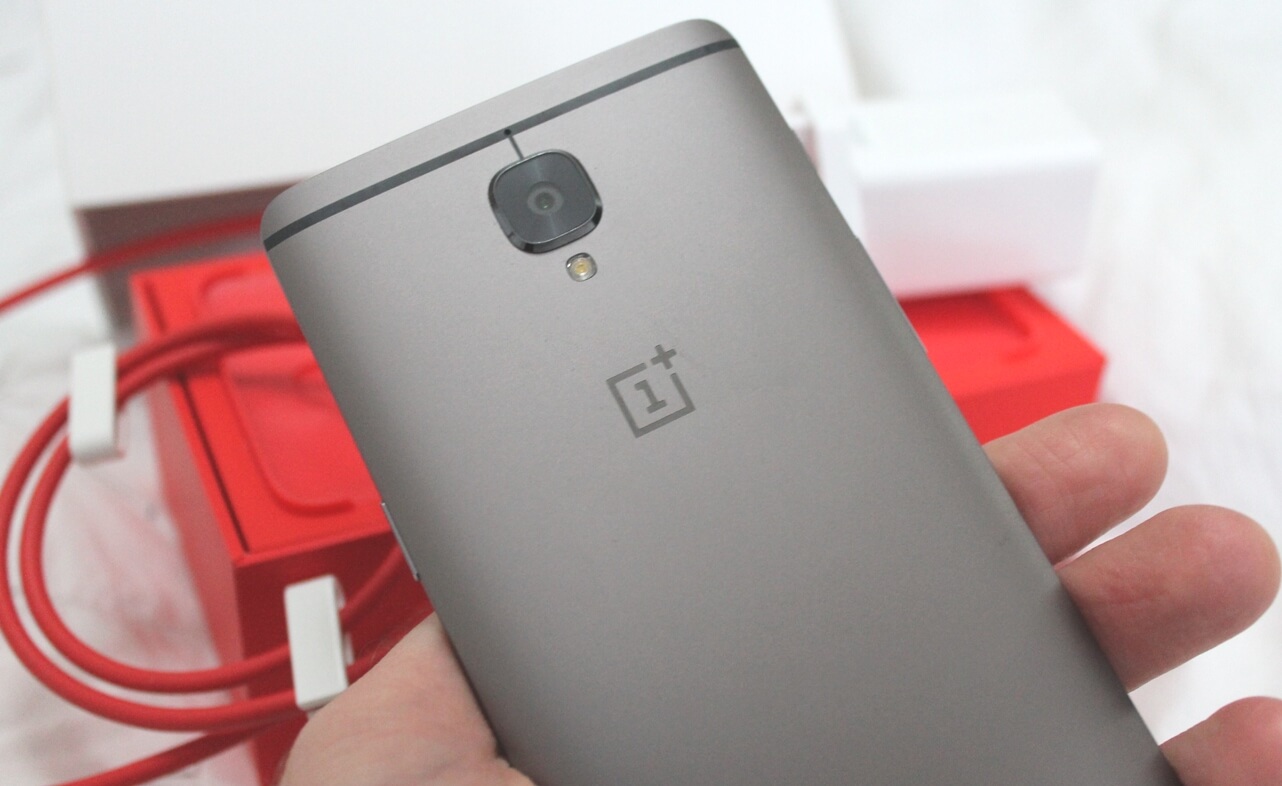 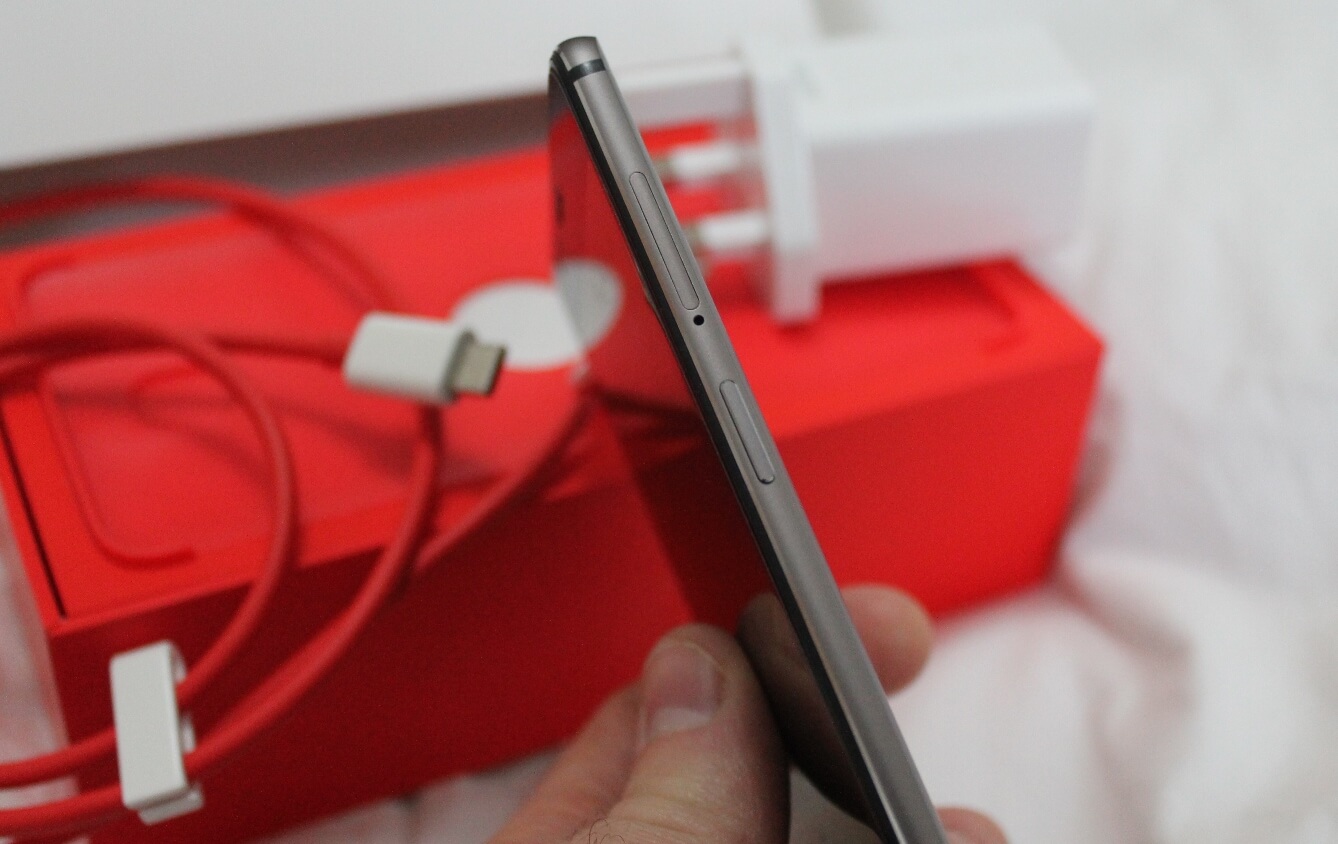 Above: OnePlus 3T: side view

The OnePlus 3T feels light and solid in the hand, and the aluminum body screams “premium.” It really is a nice piece of equipment.

One of the best things about the OnePlus 3T is the battery. The company has kept to the exact same dimensions as the OnePlus 3 but packed in a denser battery that promises 13 percent more juice than its predecessor.

Based on our tests, from a full charge the OnePlus 3 easily lasted a whole day under normal usage, which included streaming music, taking photos, and more. After unplugging the charger at 9 a.m. on Friday morning, the device still had 15 percent charge remaining at 12 p.m. the following day, which is better than any other smartphone I’ve ever used. Moreover, the OnePlus 3T has the same “Dash Charge” quick-charging functionality as the OnePlus 3, promising a day’s worth of power from a 30-minute charge. I found that the phone would charge from flat to 55 percent in half an hour, and to 86 percent in an hour.

There are other smartphones that promise quick-charging, but oftentimes it can lead to overheating, or there are limitations if the phone is being used during charging. OnePlus has shifted power management from the phone itself to the bundled dash charger, meaning much of the heat doesn’t actually reach the phone. The long and short of this is that the phone continues to charge quickly even when you’re engaging in power-intensive activities, such as streaming videos.

Dash Charge fundamentally alters the way I approach charging my device. I no longer leave it charging overnight — instead, I can plug it into the wall first thing in the morning, and it’s good to go by the time I’ve showered and finished my Cornflakes.

As with other OnePlus devices, the OnePlus 3T ships with its own flavor of Android: OxygenOS. It’s pretty lightweight and close to stock Android, but, unfortunately, the OnePlus 3T doesn’t have the latest version of Android yet — the Android N (Nougat) update should arrive for OnePlus 3 and 3T users by the end of 2016.

Still, it’s a bloat-free operating system with some nice surprises. For example, you can set things up so that passwords or fingerprint verification are required for specific apps, meaning you can safely pass your phone to your kids so they can watch Netflix without worrying that they’ll start messing around on WhatsApp or start buying things from Amazon.

Other cool features include “flip to mute,” which lets you mute incoming calls by flipping the device, and you can also grab a screenshot by swiping your screen with three fingers. 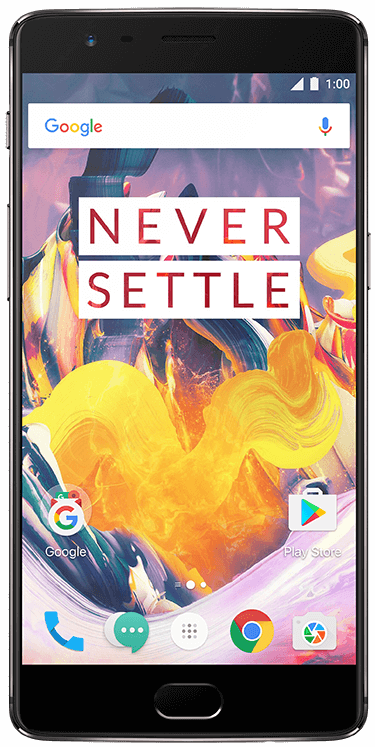 The tiny 0.75mm bezel makes the OnePlus 3T screen feel much bigger. It packs a 5.5-inch, 1080p Optic AMOLED display, and it really is crisp and clear, with rich, vibrant colors. However, this drew criticism in one particular review of the OnePlus 3, with the author noting that the display was the least accurate of any device he’d ever reviewed. The company subsequently rolled out a manual sRGB mode for those wishing more accurate colors on their screen.

“One publication called the OnePlus 3 one of the worst-calibrated displays on the market,” said Pei, at the OnePlus 3T launch event last week. “When we calibrate our display, it’s a little more vibrant for a more mainstream consumer — most people like it more vibrant. But when we got that feedback, we took it to heart, and within two weeks we released sRGB mode through an over-the-air update. After this, the same publication called the OnePlus 3 one of the most accurate displays on the market.”

The upshot of this is that OnePlus is catering to the mainstream market with the default color scheme, while giving sRGB to those with a hankering for display accuracy. It’s worth noting here that the display can also be manually tweaked through the “Customize” option. 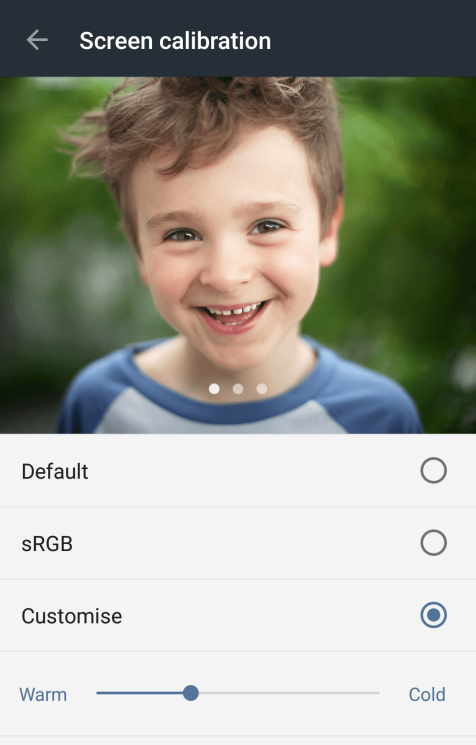 The 16 megapixel rear-facing camera remains the same as on the OnePlus 3, however it has been given a “more durable” sapphire glass protective screen. And selfie-lovers will be happy with the huge boost that’s been given to the front-shooter, which is also now 16 megapixels — double that of the OnePlus 3.

I’ve not had much chance to properly put the OnePlus 3T’s camera through its paces in different lighting conditions and so on, but it comes with the same manual controls as the previous incarnation, letting users fine-tune the white balance, focus, shutter speed, and ISO. 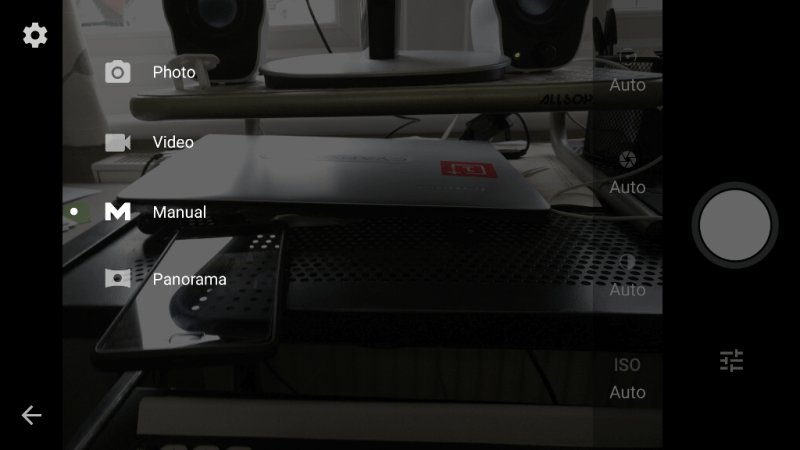 The company says it has also improved the algorithm behind the electronic image stabilization (EIS) and optical image stabilization (OIS), which should help counter shaky hands. And there are also a bunch of handy “smart capture” features, including one that automatically takes a selfie when it detects that you’re smiling. 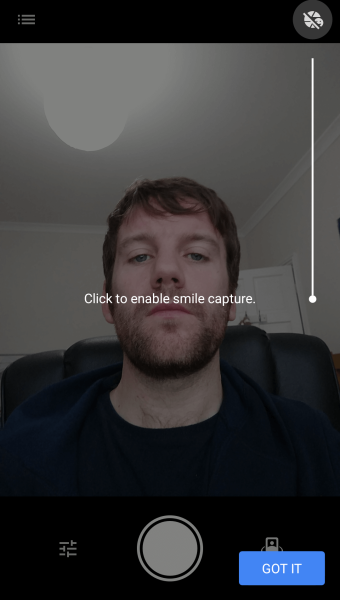 As someone who is upgrading from a OnePlus 2, the OnePlus 3T is like leaping from a cave into a valley of neon lightbulbs — the experience really is like night and day. My OnePlus 2 had become sluggish, with the screen often unresponsive to the touch, and after playing around with the OnePlus 3T, those issues are really noticeable. I simply could not go back to using the OnePlus 2 after experiencing the 3T.

Anyone moving from the OnePlus 3 or another 2016 flagship to this phone would not experience the same level of surprise and delight, so it’s difficult to recommend “upgrading” from those devices. However, anyone who’s currently in the market for a high-end Android device, but feeling as uneasy as I was about dropping $869 for a top-of-the-line Google Pixel XL, should look no further than the OnePlus 3T. It is that good.

Sure, the Pixel has some added benefits. It already has Android N (Nougat), which is required for Google Daydream VR, as well as a higher resolution Quad HD screen and a marginally bigger battery (3,450mAh). But on the flip side, the OnePlus 3T is slightly smaller and lighter, which will be preferable for many, and it has 6GB of RAM, compared to the Pixel’s 4GB; dual-SIM functionality; and higher-resolution front- and rear-facing cameras. Both devices have largely aluminum bodies, 5.5-inch AMOLED displays, fingerprint sensors, NFC, 3.5mm headphone jacks (LOL), and USB Type-C connections.

There are similarities and differences between the Pixel XL and the OnePlus 3T, but the devices are broadly in the same ballpark. And that’s why the price is such a key factor here — it’s just impossible to ignore. Once you’ve weighed up the pros and cons of each device, $869 for the Pixel XL just seems silly compared to OnePlus 3T’s $479 price. It’s a no-brainer. And this is why I have no hesitation in calling the OnePlus 3T the best smartphone on the market today.

For me personally, the best thing about the phone is actually that it is available in a 128GB option — that’s a game-changer in terms of what I can do with this thing. All my old ripped CDs have sat on a hard drive for years, with Spotify serving as my main source of music. But with an additional 64GB at my disposal, I can easily listen to all my own music sans internet connection. Throw increased processing power into the mix, and suddenly the OnePlus 3T can serve as a powerful, self-contained portable video recording and editing device, without my having to rely on a cloud storage service.

I get a sense that the OnePlus 3T was brought to market now because the founders just couldn’t wait another seven or eight months to unleash their improved specs. Granted, if I’d just shelled out $400 for the OnePlus 3 I’d feel slightly aggrieved that the company had brought a better version of the device to market so soon after. But the 3T isn’t that much better — it’s not the difference between the OnePlus 2 and the OnePlus 3.

In the short time I’ve had with the phone so far, I’ve not really encountered anything I don’t like — well, there is one minor quibble. The headphone jack is located on the bottom, while I’m accustomed to having it on the top. This is purely a subjective issue, of course, as many people prefer the jack on the bottom. In a world of disappearing headphone jacks, I’m just glad it has one at all. And it says a lot that the only thing I would change about the phone is the location of a little 3.5mm hole.

The company confirmed that the device will also be made available in mainland China, Hong Kong, and India, but wouldn’t provide any information on pricing or when it might be released for those markets.