Metacert has raised $1.2 million for its messaging app security and bot solutions, the company told VentureBeat.

“The problem is that phishing is typically thought of as a problem in email…But if a lot of people are using [messaging] instead of email, then it stands to reason that the future of malware and phishing attacks is also going to take place inside these messaging services, and that’s why Metacert exists,” Walsh said.

On Hipchat, the person who administers the bot can choose to block specific links, beyond the more than 700 million links that Security bot already blocks. Each URL added on Hipchat is only blocked for that specific company. 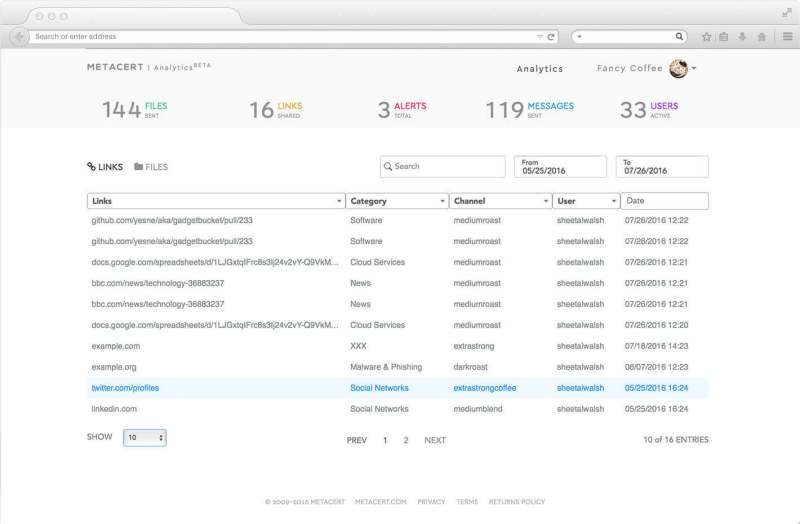 In addition to security, the bot has an analytics dashboard that lists all links and files shared on enterprise chat platforms and places each link into one of 60 categories, info that can be useful for reasons that go beyond security.

“This is good for two reasons: one for security compliance, and then, secondly, it’s useful if you just want to go back and [you] think ‘Hey I know that Sheila actually posted this link but I don’t know where the link is or what it’s called’. It gives you some high-level user statistics at the top, and we find that pretty much every customer that gets security also opts for this,” he said.

Metacert is primarily focused on security but is also maker of bCRM, a marketing management bot to send messages to Slack users and Facebook page fans. Developer.metacert.com allows any developer to add security to their app to protect users from malicious links.

Since 2012, Metacert has provided a Chrome extension and iPad web browser for web browsing free of malicious content or pornography.

“We started building security integrations into bots two years ago, and we started with HipChat,” Walsh said. “We see a world where you’re not afraid of opening the wrong link. In that context, we built the world’s most advanced content classification platform so that we can protect companies and users from malicious links that appear inside applications. And we are focused now primarily on messaging service applications.”

The $1.2 million round was led by Moneta Ventures, with participation from Shaked Ventures, Sierra Angel Network, Monta Vista Capital, and angel investors like Terry Jones, founding chair of Kayak.com.