Telegram is branching beyond being a messaging app into something more well-rounded. The company on Tuesday launched Telegraph, a publishing platform with striking similarities to Medium and Quip. What’s interesting about the service is that no account is needed — simply visit the website and begin typing away. When you’re done, hit publish and it’s immediately on the web.

Described as “a publishing tool that lets you create rich posts with markdown, photos, and all sorts of embedded stuff,” Telegraph is an interesting play, especially since it’s as if Facebook Messenger launched a Notes tool, or if Twitter natively integrated with Medium. Creating a post can be done in no time and with little restrictions — you create a title for your screed, enter in someone’s name as the author, and begin typing.

Your post will let you insert videos from YouTube or Vimeo, as well as tweets, just by dropping in the link. Images from your computer can also be embedded.

Because it doesn’t require you to log in, Telegraph is different from Medium in that you won’t be able to catalog your past work or assign them into collections. Each post has a dedicated web address following the format of “telegra.ph/[title]-[date of publishing]”. It appears that currently the only way for you to edit published work is if your computer has stored cookies. If you clear your cache, view it in an incognito browser, or access it from another device, you won’t be able to edit the post.

This freeform process may seem appealing to some, but it’s not without its risks. In an age of fake news and proliferation of anonymity, there’s little to stop me from penning a post to read like it came from President Obama, Donald Trump, Mark Zuckerberg, my colleague Jordan Novet, or anyone else — so you’ll have to be extra vigilant when reading these missives.

Why did Telegram create this publishing tool? The exact motivation isn’t clear, but it’s probably because the company feels its more than 100 million monthly active users want something else to do beyond instant-messaging one another or conversing with bots. This will be particularly impactful for those on Telegram running channels that have amassed a following, because the service could become a place for publications to run stories, pushing content away from mainstream platforms especially when it’s dealing with more sensitive topics that readers want additional assurances before reading. 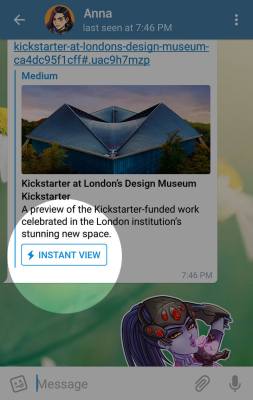 In its launch announcement today, the company couldn’t pass up the opportunity to cast some shade on the media, saying “with Telegraph, your Telegram channel can run stories just like the mainstream media (although you may find it tricky to become as biased).”

More than 12 billion messages are delivered on the popular messaging app each day, so diving into longer-form content could be of interest to the users, simplifying the process without hindering communication.

In other news, Telegram also debuted Instant View, a new mobile offering similar to Accelerated Mobile Pages (AMP) and Facebook’s Instant Articles, designed to improve article load times in a native setting. “Only a handful of websites are supported at the moment,” the company acknowledged, but promised that more would be onboarded in the future. It also added a way to search inside any chat by date, enabling you to quickly view previous moments you’ve had in the app.

Users will now be able to view all the recently sent stickers just by having a long-tap on a sticker and selecting “view pack.” Lastly, the app will show you all the groups you and a contact have in common within their profile.

And if that’s not enough to get you excited, Telegram teased that it has “something big” brewing in its “secret dungeons” that will be unveiled soon.