Amid billions in AI investment and a rush to make profitable bots by virtually every major tech giant from Apple to Google to Samsung, it can be tough to remember there are bots out there with a mission to protect the most precious, priceless thing of all — life.

As messaging apps grow user bases larger than social media platforms, we’ve rounded up a list of five bots and AI services that use SMS and chat apps to help save people’s lives. 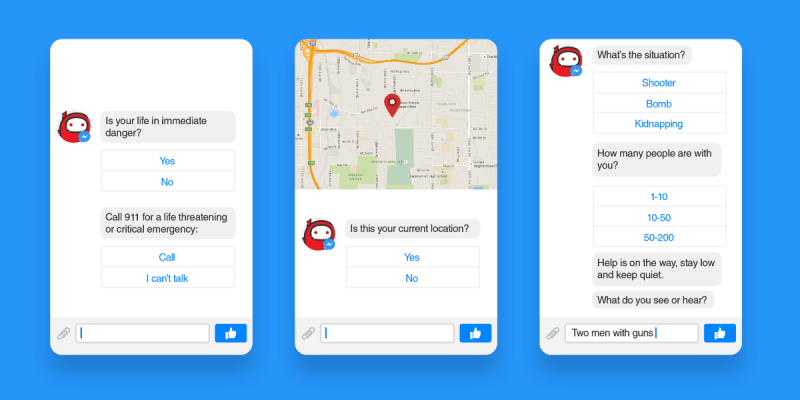 The startup Rescue created a bot that sends a distress signal to family and friends through chat apps like Facebook Messenger, WhatsApp, Slack, and SMS. Just a few months old, Rescue bot trials are being conducted in the San Francisco Bay Area.

“There are many emergency situations where it isn’t safe to make a phone call. Rescue lets you tap a few buttons and alert your family and friends, without alerting others nearby you. A silent and pinpointed distress signal, via messaging,” cofounder Justin Clegg told VentureBeat in an email.

Rescue wants to work with universities, governments, 911 emergency systems, and others to provide a more effective way to locate people in trouble. The ability to reach emergency officials via chat may make increasingly more sense as more people adopt the use of chat apps and make fewer phone calls.

“A lot of people saw the John Oliver 911 video showing how broken the system is right now. The irony is this problem is totally solvable. This solution is tractable. We can build it,” Clegg said.

This reality may be coming to some parts of the world quicker than others. The European Commission is currently considering privacy law reforms that would require messaging apps like Facebook Messenger and WhatsApp to operate more like a utility, more like SMS and phones than as just another app.

The emergency alert system used by FEMA and the president

The Wireless Emergency Alert (WEA) system is deployed by the Federal Emergency Management Agency (FEMA). This is a messaging system offered to government officials by wireless carrier providers.

FEMA or the president can send WEA messages out when a terrorist attack, natural disaster, or other emergency takes place or when an AMBER alert is issued after a child abduction.

For example, terrorism suspect Ahmad Khan Rahami was captured an hour after WEA was used during a manhunt in New York and New Jersey.

In late September, the FCC voted to make WEA messages longer, to include more rich media like images and links, and to make location data more accurate. Maximum message size will be extended from 90 to 360 characters.

Cogito’s AI is being used at the VA and hospitals to track the mood of people with depression and PTSD. Every day, users of the Cogito app record a diary with their voice so the app can sense their mood. The AI also draws on location data to see if the person has left the house and cell phone data to tell if they’ve been in touch with friends or family recently. If a person hasn’t moved in days and shows early signs of illness, a doctor or caretaker will be notified.

The AI is also being used to teach negotiation techniques to West Point cadets, Cogito said.

Crisis Text Line received $23 million from the Bill and Melinda Gates Foundation, LinkedIn cofounder Reid Hoffman, and others to expand its mission to offer counseling services via text message.

The initiative is powered by a staff of volunteers guided by training and by machine learning made smarter by tens of millions of messages.

Crisis Text Line also works at high-profile places like the Golden Gate Bridge, for cities like Chicago and (soon) San Francisco, as well as Montana, the state with the highest per capita amount of suicidal thoughts, according to CTL.

In the case of Kik, Crisis Text Line is preceded by AI from Koko, which is made to offer helpful advice to humans in distress.

Due to the fact that the majority of its users are below the age of 25, Crisis Text Line can share glimpses into the mental state of young Americans. For example, following the release of a video in which President Elect Trump described sexually assaulting a woman, Crisis Text Line saw a higher than average amount of messages related to sexual assault and sexual abuse.

Twilio and its cloud SMS services has been in the business of saving lives for years, both for Crisis Text Line and Rescue and for its own Twilio.org.

In 2013, Twilio.org launched BeFree (233733), a short code for human trafficking captives to alert authorities of their location. The Polaris Project was made in partnership between Thorn, Salesforce, and Twilio.org.

“Sending a short code is a safer option versus making a call while under the supervision of captors. One quick text to ‘BeFree’ to be automatically connected to The Polaris Project’s National Human Trafficking Resource Center (NHTRC). Then the text can be erased,” Twilio.org said in a blog post.

A year later, Twilio released a series of open source tools for use by authorities and nonprofits in emergencies and natural disasters.

Available on GitHub, the bots can be used to broadcast messages to a group, host conference calls, host a helpline, and conduct surveys.

Beyond Verbal wants to detect disease with Amazon’s Alexa

Number six on the list here is an honorary mention since it isn’t saving lives just yet.

Based in Tel Aviv, Beyond Verbal created the Beyond mHealth Research Platform this fall to find out if the sound of a person’s voice can be associated with specific medical conditions.

“We need to substantiate [this idea], which is again why we are coming with this research platform to really engage with institutions all over the world,” Beyond Verbal CEO Yuval Mor told VentureBeat in a phone interview in late September. “We are still in the research phase.”

Mor envisions the knowledge base being used to listen intently to a patient recently home from the hospital, the elderly, or chronically ill, as well as people in remote areas with a lack of access to robust medical services.