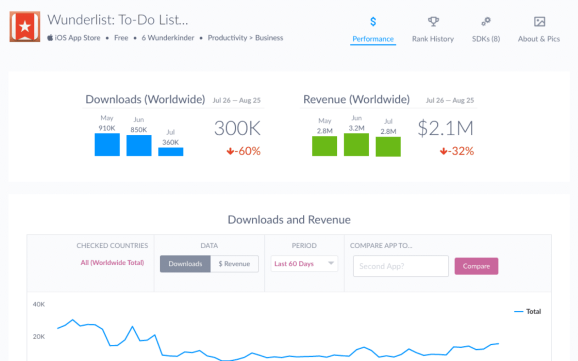 Apptopia, an app intelligence startup based in Boston, has raised a $2.7 million seed round of funding from Ashton Kutcher’s and Guy Oseary’s Sound Ventures VC firm, existing investor Mark Cuban, 500 Startups, and a handful of other VC firms.

Founded in 2011, Apptopia serves up what it calls “the most accurate” downloads, revenue numbers, and SDK data across all mobile app and publishers in the world. The company had raised a number of small seed funding rounds since its inception, but this latest tranche represents its biggest raise to date and takes its total funding to the $5 million mark.

Apptopia claims some big name clients, including Google, Pinterest, Facebook, NBC Universal, Deloitte, and more. The company says that it will use its fresh cash injection to make better products with “more intelligence to create the next generation platform,” according to a press release. “We’ve seen tremendous growth over last year, tripling annual recurring revenue since the beginning of 2016,” said Apptopia CEO Eliran Sapir. “There’s so much opportunity in this space still. Our goal is to bring more transparency to the app ecosystem and make it easier for people to both enter and succeed.”

App analytics and intelligence is big business, with a number of notable players in the space, including App Annie, which has raised a whopping $157 million in equity funding, and which has snapped up rivals, such as Distimo.

“I believed in Apptopia and its founders when I initially invested in 2014, and my belief has only strengthened as the company has tripled its revenue just this year,” said Mark Cuban. “Having experience with my own app, Dust, I know how important app marketplace intelligence is to big and small developers alike and what that insight can translate into.”