Gumtree has emerged as one of the top online classified ad networks in the U.K. and Australia, and it was snapped up by eBay in 2005 for an undisclosed amount. This acquisition came just nine months after eBay bought a 25 percent stake in Craigslist, a stake it relinquished last year.

Earlier this year, eBay began experimenting with injecting search results from its own platform into Gumtree in Australia, so someone searching for “Xbox 360,” for example, would see listings from across both platforms. 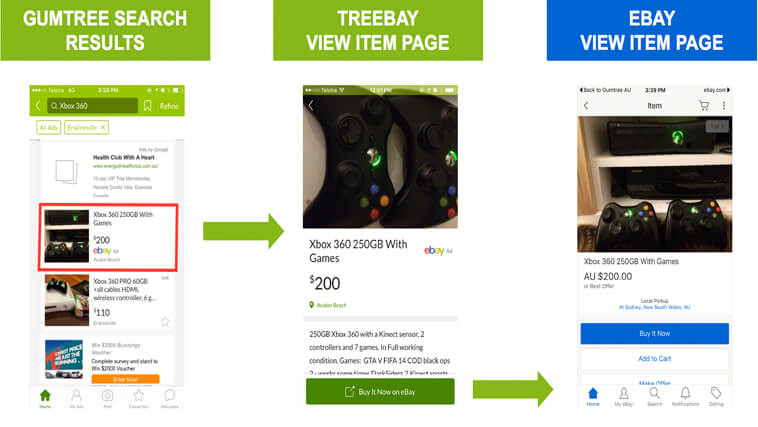 Above: eBay in Gumtree

As a result of these initial tests, eBay says that it’s now opening the eBay inventory up to Gumtree in the U.K, and Kleinanzeigen, its equivalent German classifieds site, by the end of 2016. And in the first half of 2017, the company says it plans to “expose millions of relevant eBay listings” on its classifieds sites elsewhere around the world.

In addition to the U.K., and Australia, Gumtree operates in Ireland, Singapore, Poland, and South Africa, while eBay also runs a wider classifieds network under different names — Kijiji is used in hundreds of cities across Canada, Italy, Hong Kong, and Taiwan, and there’s LoQUo in Spain, Vivanuncios in Mexico, and eBay Classifieds in the U.S. and Germany.

“The idea behind this effort was to deliver even more relevant search results to consumers, leading to increased conversion on eBay-listings,” explained Alessandro Coppo, general manager at eBay classifieds group, in a blog post. “The responses and engagement from Classifieds buyers with this new experience have been positive and highlight the opportunity we have to unlock significant consumer benefits by bringing our platforms more closely together through inventory sharing.”

While the move does make sense on many levels, it also goes against eBay’s hitherto deliberate ethos of keeping its core brand and classifieds apart — most people in the U.K., for example, probably aren’t aware that Gumtree is owned by eBay. In an interview with VentureBeat back in January, Gumtree explained why it kept the branding distinct.

Moving forward, things are about to change, due to eBay increasingly “unearthing synergies” across its myriad platforms. But it’s not just about integrating inventory — the company is also working on ways of blending its technological infrastructure, sharing consumer insights and analytics between its range of services. For example, back in March, eBay acquired Cargigi, an online advertising and marketing platform for the automotive industry, and eBay is using these smarts to help car owners on Kijiji and Gumtree in South Africa sell their vehicles through automated tools.