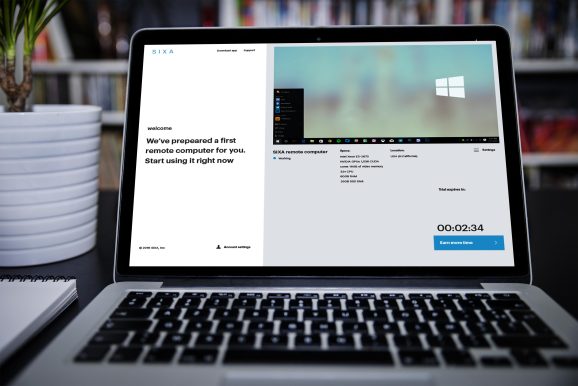 Five months after its debut as part of Y Combinator’s summer 2016 batch, Sixa is now publicly available for usage, enabling developers to tap into a personal computer built entirely in the cloud. As part of its launch, the company has raised a $3.5 million seed fund in a round led by Tandem Capital.

More than 15,000 developers have used Sixa’s offering through a private beta period with “thousands more” waiting for access. However, starting today the company is notifying everyone that it’s an open platform.

Founded by Mykola Minchenko and Ievgen Nechaiev, Sixa eliminates the worries around outdated hardware. Just like the cloud did with servers, the company is doing the same with personal computers. The idea took hold in 2015 when the team sought out ways to build a cloud computer “with the same feeling as using a physical one,” but accessed through a remote connection. Unable to find one, Sixa turned to building one itself.

“All a developer needs is a browser and internet connection to have a powerful PC at his or her fingertips,” the company claimed. Minchenko also remarked, “We’ve eliminated latency from using a PC in the cloud and added the convenience of having the most up-to-date hardware and software at all times.”

Now that developers can have virtual computers customized to their needs instead of having to build their own or adjust their development based on their current setup, there are plans to work on extend the model to other areas where “high-powered machines are critical but hardware remains a headache.” Sixa outlined that possible focus areas include data-rich design, secure enterprise access, and even virtual reality systems. More details are set to be revealed next year.

Previously the company raised more than $261,000 in funding from Startupbootcamp Istanbul, WS Investments, and, of course, Y Combinator.