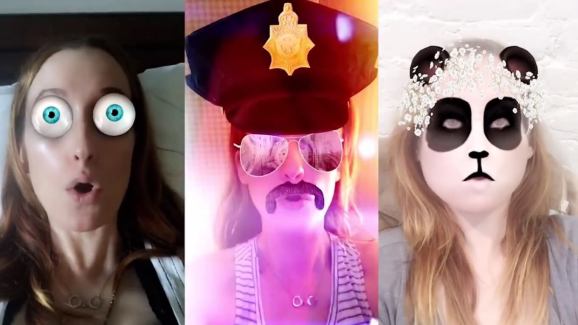 A still from Ingrid Michaelson's "Hell No" music video shot with Snapchat filters.

There’s no doubt that virtual reality, when it’s well executed, can be an emotional and literally awesome experience. I’ve experienced it myself, and the possibilities are mind-blowing. But the problem is that right now, and for the foreseeable future, there is a dearth of VR content. There’s not much to do with it other than ooh and ah over some visuals. And its immersive qualities that are so impressive ultimately limit its opportunity for widespread use. Its ecosystem is currently fractured by an array of software and hardware (including cardboard) solutions. And although there’s undoubtedly enormous potential within the VR space, that’s all it is at this point: potential.

In contrast, VR’s less-hyped sibling, augmented reality (AR), is ripe with opportunity right now. It already has a couple of monster consumer successes and major heavyweights behind it, portending a future greater than VR.

Snapchat is early proof of this. It’s one of the most popular mobile apps of all time, largely because it leverages AR to drive engagement, to the tune of 150 million daily active users and 10 billion Snapchat videos daily (not to mention an imminent $20-$25 billion IPO). Its success is an early indicator of just how powerful smart deployment of AR can be. Another breakout AR smash in 2016 was Pokemon Go, whose app has been downloaded 500 million times and whose players have walked 2.8 billion miles. As BI Intelligence reports, the VR and AR market opportunity combined is estimated to be $162 billion by 2020. The research firm believes AR will bring in more revenue than VR. Why? Because AR can integrate far more easily with other systems, everything from healthcare to product design to management tools.

Industry heavyweights have placed their bets on AR as well. Microsoft is currently developing HoloLens, which is called “mixed reality” but falls more in the AR realm. Tim Cook has hinted that Apple is interested in AR. The last time he made a similar hint about wearables, Apple subsequently released the Apple Watch, which may explain why rumors are now surfacing about Apple adding AR to the car, and why it just patented an AR mapping system for the iPhone. Then there’s talk that AR is being integrated into the iPhone camera.

Finally, while not a household name, there’s Magic Leap, a stealthy startup currently working on an AR platform that has already raised $1.3 billion. While it’s true that Facebook, Sony, Samsung, and Google have all invested in VR, my bet is that Microsoft, Apple, and Magic Leap are going to collectively make AR the next massive medium.

Another reason AR will dominate is human nature. People like to consume media communally and often in small bites. VR is fully immersive — when you’re in it, you’re generally in it alone, and you can’t take a peek at your Facebook feed or Twitter or send a quick text message. Humans dip in and out of various media billions of times a day to connect with others. VR requires specific, expensive hardware and doesn’t lend itself to communal experience. Then there’s the fact that VR offers a “lean back” (and enjoy the ride!) paradigm that isn’t sustainable for long periods because it gets either exhausting or boring over time; the AR paradigm is more “lean forward” — active and participatory.

When a platform is communal, network effects take hold. With AR, this means it’s going to reach mainstream adoption far faster. We’ve seen this already with users Snapchatting each other using AR filters and catching Pokemon together on Pokemon Go.

Then you have to look at cold hard money. The opportunity for monetizing within AR is simply much greater. Because it requires less fuss (hardware, software), there will be more daily active users; and because it’s not immersive, the sessions will be much longer. Once AR technology is sufficiently fashionable (not this), you could potentially be in an AR environment all of your waking hours. Anyone in the publishing industry will tell you that high DAU numbers coupled with long session times is the holy grail in terms of monetization opportunity. This adds up to exponentially greater opportunities for monetization in AR compared with VR.

Ultimately, AR’s less hermetic, lean-in characteristics are more in keeping with today’s media consumption culture. People might be distracted by the possibilities of VR, but the truth is AR is already ahead of VR, and it’s early days. We’re going to see more applications of AR that can be monetized well. There’s a good chance that one day AR, broadly speaking, will be the dominant medium in our lives.

Mark Rosner is the CRO of AppLovin, a mobile marketing platform that helps the world’s largest brands reach over two billion consumers globally with relevant content.