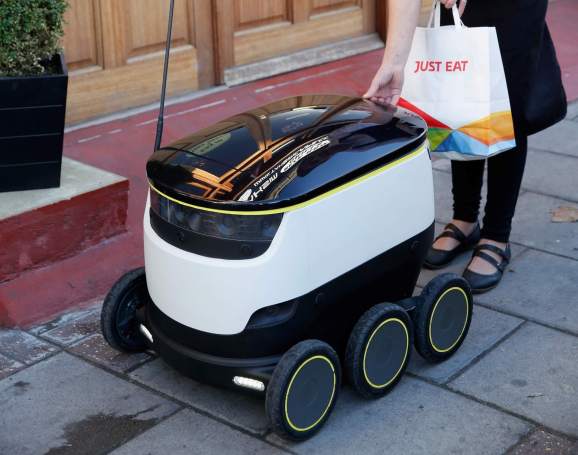 LONDON, ENGLAND - NOVEMBER 28: A general view of the Just Eat Robot on the streets of Greenwich on November 28, 2016 in London, England. (Photo by Tristan Fewings/Getty Images for Just Eat)

It’s been a big week for online food-tech acquisitions in Europe. On the weekend, news emerged that Germany-based online food-ordering giant Delivery Hero had acquired Berlin-based counterpart Foodpanda in a deal that consolidated two Rocket Internet-backed companies that had raised around $1.5 billion in VC funding between them.

Today, London-based food delivery juggernaut Just Eat announced it was buying U.K. competitor Hungryhouse, a company that Delivery Hero had snapped up back in 2013 in a deal worth £200 million (USD$250 million), though this could be bumped up by an extra £40 million ($50 million) if Hungryhouse performs well before the transaction is complete.

Similar to GrubHub, Just Eat aggregates restaurants from across multiple types of cuisine and lets users order and pay for their food in-app. Buoyed by its $2.45 billion IPO back in 2014, Just Eat has gone from strength to strength in the two years since, and it operates in more than 15 markets across Europe, the Americas, and Oceania. The company has been investing significantly in its product research and development (R&D), and pledged to spend around $60 million in the U.K. alone in 2016. Earlier this year, Just Eat debuted a new collaborative ordering app that lets people place their orders through Apple TV, and last month it claimed a “world’s first” drone-delivered meal.

It’s true to say that Europe is somewhat saturated with online food-delivery services, with the likes of Deliveroo recently arriving on the scene and attracting big investment dollars. It makes absolute sense that we’re seeing a degree of consolidation across Europe and beyond, which is why we’ve seen both Just Eat and Delivery Hero reassess their market position through acquisitions and divestments.

While the SkipTheDishes deal is expected to close today, the Hungryhouse transaction could face some friction, given that Just Eat and Hungryhouse are among the two top brands operating in the space in the U.K.  This one will need approval from the Competition and Markets Authority (CMA) before it’s concluded.

“The U.K. has long been an engine of growth for Just Eat,” said David Buttress, CEO at Just Eat. “While we have significantly expanded internationally in recent years, we have remained focused on building a high-growth, sustainably profitable business domestically. Through this transaction, we would extend our market presence in the U.K. and sustain high levels of growth, given the considerable opportunity in this market.”

The timing of Delivery Hero’s two transactions also tells a story. First, the company bought Foodpanda, which operates across 43 markets, with a particular focus on Asia, Eastern Europe, and the Middle East. A few days later, news emerged that Delivery Hero is selling Hungryhouse, a company that operates solely in the U.K. The U.K. wasn’t the most profitable for Delivery Hero, with Just Eat and newcomer Deliveroo stealing the show, so rather than fighting what was likely going to be a losing battle, it has elected to focus its efforts in other markets. According to figures, Hungryhouse racked up a £13.1 million (USD $16.4 million) pre-tax loss last year.

“The sale of Hungryhouse to Just Eat rationalizes our global footprint, and we remain focused on operating market leading brands, globally,” explained Niklas Östberg, Delivery Hero CEO. “Proceeds from this sale will allow us to pursue further global growth and profitability opportunities, as we have consistently and successfully done in recent years.”