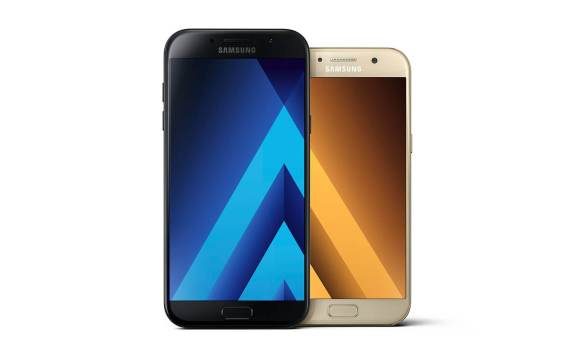 Samsung has announced an upgrade to its Galaxy A series of smartphones, bringing many features from its S7 lineup to its 5.7-inch A7, 5.2-inch A5, and 4.7-inch A3 mid-range devices. The 2017 editions contain 16 megapixel front and rear-facing cameras, water and dust resistance, support for microSD cards, and more.

Customers can purchase the Galaxy A phones in Russia early this month, with an expansion to other markets soon after.

It’s been nearly a year since Samsung introduced the Galaxy S7 and S7 edge, the latest version of its flagship smartphone. What stood out on those devices was exactly the same things that are now available on the A series: an improved camera, capable of quickly snapping quality photographs in low-light conditions, along with an updated user interface.

Additionally, the device is now rated IP68, joining the S series and the now defunct Note7 smartphones as the only ones in the Samsung line to receive that rating, although it’s likely that moving forward, all products will have this rating.

There’s also a microSD slot that accommodates expandable memory of up to 256GB. And the Galaxy As supports fast charging, Samsung Pay, and USB Type-C.

A useful feature from the Note7 has been included in the updated A series: Secure Folders. This makes it possible to compartmentalize files and applications so that only you can access them. Secure files are locked behind either a pattern, PIN, or biometric authentication system so you can safely store essential documents, like a copy of your passport, financial apps, or address book. Interestingly, this is perhaps one of the first times Secure Folders has been supported on a non-Note device.

“At Samsung, we are always trying to ensure our customers have the most advanced products on the market,” said DJ Koh, president of Mobile Communications Business at Samsung Electronics, in a statement. “The latest Galaxy A series is a testament to this. We integrated our unique approach to design as well as the features Galaxy customers have come to love to provide added performance without compromising on style.”