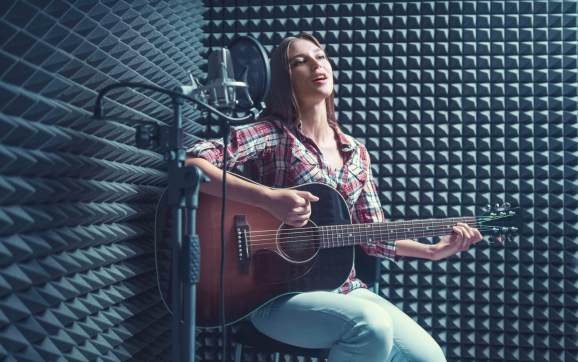 Digital music really could use some help. Industry revenues are dipping due to piracy and illegal use of content. Singers and composers are being short-changed by music companies and streaming services. And business models built upon patterns and practices dating back to early 20th century, decades before the invention of digital and online services, are fueling a lot of bad will.

But a number of blockchain innovators are forging new solutions that could knock down inefficient intermediaries standing in the way and enable musicians to transact easily and directly with audiences.

Digital rights expression is one of the biggest problems the music industry is tackling presently. It’s extremely difficult to clearly define which performers, songwriters, producers, publishers, and labels own the rights to songs and recordings and how royalties should be split between them.

This is the first place we can expect blockchain to bring change. The ledger stores a cryptographic hash representing the digital content of every new song registered on the blockchain, along with lyrics, musical composition, liner notes, cover art, licensing, and other relevant information.

Since they are immutable distributed ledgers owned by no single entity, blockchains will enable content creators to register ownership of their creations without the need for big record labels.
This concept is being tested and explored by several startups and nonprofit organizations. One key player is UjoMusic, based on the Ethereum blockchain, that enables artists to manage their identities, music, and licensing on their own terms. Combining the transparency of the blockchain with the innovation of smart contracts, the system also enables consumers to license the music for various purposes.

Ujo beta-tested the platform last year with “Tiny Human,” a song by award winning British singer and songwriter Imogen Heap, and it plans to go mainstream in early 2017.

Heap, herself a technologist, is pioneering her own blockchain-based offering, Mycelia, a fair-trade music business that gives artists more control over how their songs and associated data circulate among fans and other musicians.

Another problem that blockchain-based services such as Ujo and Mycelia can solve is how content creators get compensated for their work.

Currently, a string of publishers, record labels, talent agencies, streaming services, etc., each take a cut of revenue before passing any remaining crumbs along to artists — after a 6- to 18-month delay.

“Shouldn’t it be possible in a digital world for the royalties to come directly to you, instead of through a slow, inefficient, and opaque chain of collection societies and publishing administrators?” reads “The Problem,” a statement published by the founders of Ujo Music.

As reliable peer-to-peer platforms, blockchains establish a direct relationship between artists and consumers, making sure they are instantly paid for their content and receive near-full payment instead of a tiny fraction.

Users place requests on the blockchain, and smart contracts give instant access to the requested song while directing funds to the crypto-wallets of the song’s rightsholders. That’s why Heap describes her platform as “trying to take away the power from top down and give power, or at least a steering, to the artist to help shape their own future.”

In addition to removing intermediaries, the transparency of blockchain and smart contracts enables artists to make suretheir music is properly licensed and enables consumers to prove ownership of their license on the ledger.

What happens to the record labels after this? Heap believes they can still benefit from this model, if they adopt and embrace change. “As with all new technology, blockchain creates a shift in skill sets and opens up new opportunities,” she said in an op-ed published in Fortune. “There is an ever-greater need for curation and marketing. Record companies could better help music lovers to sift through the hundreds of millions of hours of music and, along with the publishers and existing collection societies, verify that the data are indeed correct. At some stage, artists will invariably need to work with these and other parties.”

A final problem blockchain will need to solve for musicians is piracy. As Matthew Hawn, Head of Product at Audio Network, says, “Consumers assume that music is free. Most of Spotify’s users, for example, are on the ‘free’ tier of the service. Aside from a small but growing group who pay monthly for access, the only people left paying for music are brands and businesses using music to sell other things.”

This is partly due to the fact that users have plenty of ways to copy, record, and distribute content without the consent and compensation of its owners.

PledgeMusic cofounder Benji Rogers presented a comprehensive design for a blockchain-based music database and a codec that could possibly solve the problem.

Rogers introduced the idea of .bc or “dotblockchain,” a codec and player that is tied to a blockchain in order to play content. Every instance of a song played is a unique record on the blockchain, and any content removed or “ripped” from the codec would be unreadable to the player.

BitTunes, a blockchain-based peer-to-peer file sharing platform, has another interesting approach. It uses incentives and rewards to encourage users to publish and distribute music via a blockchain platform, where both content creators and distributors are compensated.

And PeerTracks, another leader of blockchain implementation in the music industry, is offering a business model that could change how artists develop their fanbase and build relationships with their fans. PeerTracks is a download and streaming platform where artists get 95 percent of the revenues.

PeerTracks also introduces the concept of “Notes,” a sort of ICO token tied to artists’ profiles. While Notes do not give fans a stake in songs, albums or copyright, they can be bought, sold, and traded, and their value rises as an artist’s content is downloaded or streamed off the blockchain. Artists can also use them to identify their biggest fans and offer them rewards such as free concert tickets.

Notes give artists a tool to gain exposure and convince their fans to stick with the platform. It also creates a reasoned prediction market, where rising stars can be discovered by their Notes value.

It’s still too early to say how blockchain-based music platforms will perform since most of the bigger players still haven’t launched in earnest.

However, blockchain music solutions will have to overcome a lot of challenges, including the transfer of old license and ownership information to these new platforms.

“Record labels, big and small, have typically failed to keep proper records for the artists they sign,” notes Hawn from Audio Network. “Contracts have always been excessively complicated. There were very few standards, and these were often flouted by labels, leaving data entry to interns and IT departments. This doesn’t go away when you move the infrastructure to the blockchain; if anything, it gets worse and will cost millions to fix.”

For this reason, Hawn emphasizes that it’s important key players unite behind blockchain solutions in general rather than look to back a single company.

“A shift like this isn’t going to be achieved by a Steve Jobs-like figure who will magically solve this problem and build a new system overnight,” he says. “This is about laying the bricks, mortar, and plumbing of a new music industry.”

Hawn suggests more support for MusicBrainz, a non-profit open encyclopedia that collects music metadata, and Open Music Initiative, an open platform for licensing data, can help bridge the data gaps that are currently present in the music industry.

Blockchain is probably not a panacea to all the problems plaguing the industry, but it promises a way out of the current deadlock and offers a foundation that can bring together the entire community and give everyone, from amateur singers to platinum record selling superstars, the chance to offer their talent to the world and be compensated for it.

The point, as Imogen Heap says, “is that artists, as the source, will be sustained at the center of their own ecosystem, not starving at the edges of many others’.”