Superflex has unveiled its “powered clothing” to help elderly people stand and walk more easily with the assistance of its science-fiction-like powersuits.

Superflex took ideas for futuristic military armor, which enables soldiers to carry heavy packs or jump through the air, and applied them to the challenges faced by elderly or disabled people who are too weak to go up stairs or to even get up out of a chair.

Yves Béhar and his industrial design team at Fuseproject — creators of projects such as the Ouya game console and One Laptop Per Child — collaborated with Superflex to design the clothing, which was unveiled in concept form at the London Design Museum’s exhibit devoted to design innovations in aging. 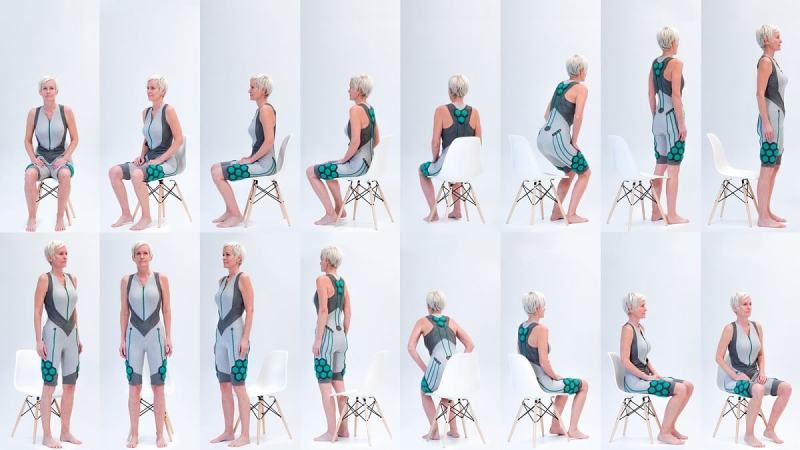 Above: Superflex’s suit is designed to help people get out of chairs.

“Superflex’s new powered clothing technology means that people will lead fuller, healthier, and more rewarding lives,” said Rich Mahoney, cofounder and CEO of Superflex, in a statement. “We are honored to share our vision for powered clothing and our exciting collaboration with Béhar and Fuseproject at the London Design Museum.”

The prototype suits will be turned into consumer product and debut in 2018. The company spun out of the robotics lab at think tank SRI International a year ago and raised $9.6 million in a funding round led by Japan’s Global Brain. 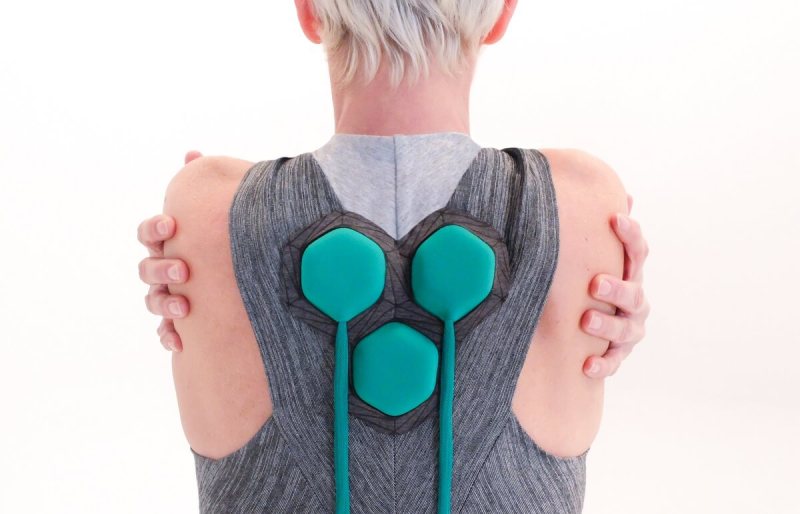 Above: Superflex’s suit was designed by famous designer Yves Béhar.

The company said today that Béhar is also joining Superflex as an official advisor.

Superflex’s suit concept is on display at the New Old exhibit in London in the company’s first public presentation of its vision for powered clothing — as a “powered suit” to improve wearers’ confidence in performing everyday activities. Lightweight, connected, and outfitted with electric “muscles,” the suit is designed to provide “core wellness support” to a wearer’s torso, hips, and legs, and it gives an extra boost to one’s strength when getting up, sitting down, or staying upright.

Led by an internal team of textile specialists and fashion designers, the suit form has been in development for the past year, with Béhar and Fuseproject recently joining to provide world-class usability and industrial design. Superflex designed the suit, while Béhar focused on the aesthetics and usability.

Mahoney previously served as the director of robotics at SRI International. 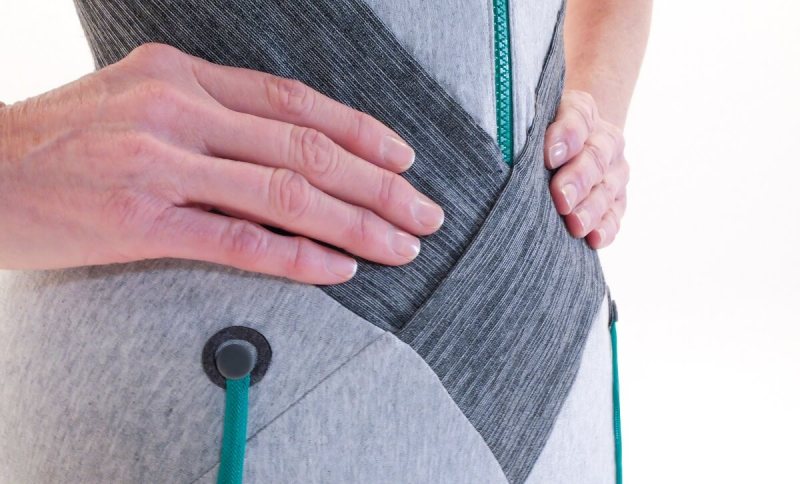 Above: Superflex’s suit is both functional and pretty.

“When we talk about designing for an aging population, the standard approach has been to provide aid in the home — completing tasks, welfare modules, accommodating lack of mobility, which results in a life lived more statically,” said Béhar, in a statement. “But what if technology could help us continue to move about the world and engage with it, physically, socially and emotionally? This is the question Superflex is answering with the concept of Powered Clothing: to empower us by enhancing our physical ability so we can continue to live actively. I’m thrilled to join the team creating that vision.”

Many of Béhar’s works are included in the permanent collections of museums worldwide, including the San Francisco Museum of Modern Art, the Centre Pompidou in Paris, and the Art Institute of Chicago.

Béhar is a frequent speaker on design, sustainability, technology, and entrepreneurship. He has garnered over 300 awards, including the Design Miami/ 2015 Design Visionary Award, the London Design Museum’s Design of the Year, Cooper Hewitt’s National Design Award, IDSA Design of the Decade Award, IDA Design of the Year, and Conde Nast Traveller Designer of the Year. He was named a Top 25 Visionary by Time Magazine, and was recently named “Most Influential Industrial Designer in the World” by Forbes. 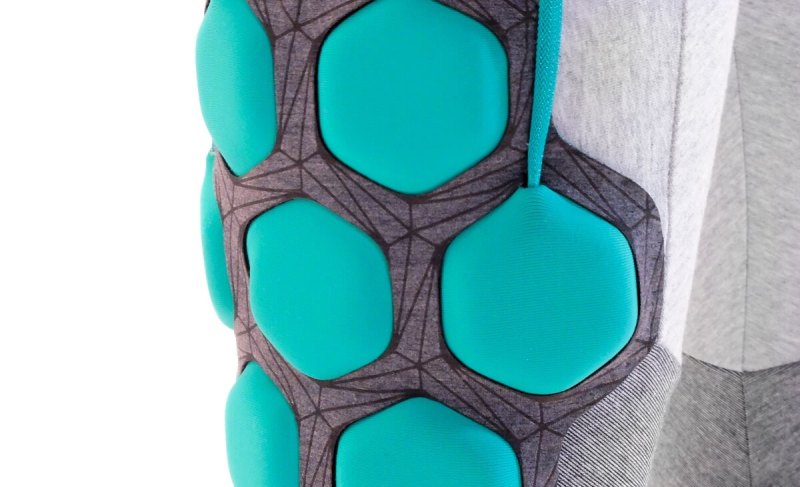 Above: Superflex’s suit has wires designed into it.

When we talk about designing for an aging population, the standard approach has been to provide aid in the home– completing tasks, welfare modules, accommodating lack of mobility, which results in a life lived more statically. While these efforts to address ADLs – activities of daily living – are important, they fail to take on the greatest challenge: mobility outside the home. But what about if technology and design could help us continue to move about the world and engage with it physically, socially and emotionally? This is the question Superflex is answering with ‘Aura Powered Clothing’ being presented for the first time at the breakthrough ‘New Old’ exhibition at the London Design Museum.

Powered Clothing is the brainchild of Superflex – a start-up that was birthed in the Robotics Lab at SRI in Palo Alto. We partnered with the Superflex team on the design and application of their groundbreaking technology. The result is a wearable powered suit with function and details that showcase the technology within. The design emphasizes wearability, beauty and details, while integrating the complexities and ingenuity of the system. 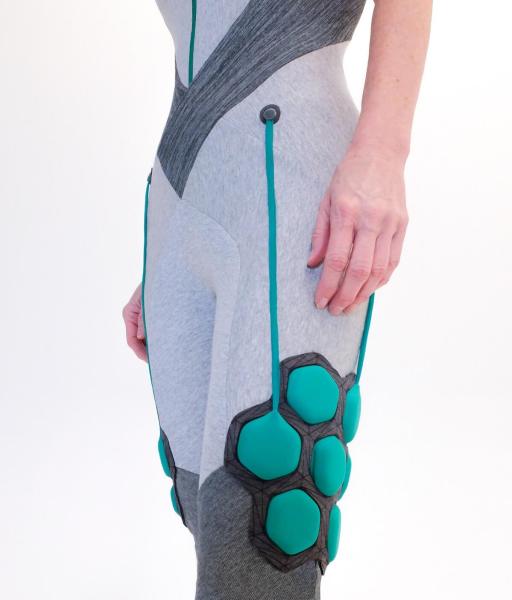 Above: Older people and the disabled can stand and move better in a Superflex suit.

Our goal in designing for the New Old exhibition at the Design Museum is to show what technology can do for an aging population right now.

The New Old exhibition is the perfect setting for presenting this new concept. Designing to solve for the lack of mobility due to muscle weakness, balance issues, and coordination problems that all too often makes the elder population a captive of their own homes is an important challenge. With motors, sensors, and artificial intelligence embedded into a lightweight and flexible fabric, Superflex’s Aura Powered Clothing provides support for the user’s torso, hips and legs. It reacts to the body’s natural movements, adding muscle power to naturally complement the user’s strength in getting up, sitting down or staying upright. In fact, Powered Clothing amplifies an individual’s ability to move freely in the world. Over time, the potential is to actually improve muscle strength, balance and coordination for the wearer. Movement begets progress. The suit, including its embedded hardware, will be insignificant in weight and deliver an exponential amount of strength.

While most robotic technology and AI bring up dystopian notions, we have specifically designed the Aura Powered Suit to be easily adoptable and promote daily use for the elderly.

Using biomimicry, the suit configuration is anatomically aligned with the natural muscular composition of its wearer. With maximum comfort in mind, the hard technology components such as motors, batteries and control boards are designed into hexagonal low-profile pods. These pods are attached to fabric origami fold-ins that allow movement in 3 dimensions, permitting the hardware to expand, contract and move with the wearer. This enables a modular and scalable system that adapts to different user muscular needs and heights. The hardware pods are removable to make the garment cleanable.

While the technology inside of the pods is complex, the actual fabric itself is designed with beautiful intricacies to enhance its functionality. For the suit to deliver its assisted movement, it has to grip the body while being comfortable. Within the soft, engineered fabric, there is a V-shaped band that holds tightly around certain points on the body in order to maximize ergonomics and lumbar support. While the concept on display highlights this band as well as the mechanics connecting each of the main muscle points, the final suit will be designed with all these elements integrated – an elegant, minimal looking undergarment that hides its technology and intelligence within.

Fuseproject and Superflex are continuing to develop this concept: ensuring it is seamless for older adults to use, easy to clean and put on, and accessible in price. The design and style framework we are building stands apart from the typical aesthetic for the aging market marked by a clinical and “sickroom aesthetic”. Instead of the design and aesthetic framework of products for the aging market that is stigmatizing and reinforces increased marginalization, the materials and design details of the Superflex design are about comfort, performance and style.

Powered Clothing has the clear ability to expand and extend our human potential, providing strength and confidence to participate fully and richly in the world.

Expanding the social lives of an aging population – extending the window during which they can remain independent, active, and connected – is what Superflex and Fuseproject are enabling in the immediate future. We believe that we are on the cusp of liberating a generation from a fate that consigned its predecessors to a life of diminishing expectations. Superflex is innovating a new category of Powered Clothing – smart yet friendly – and invisible – connected wearables that represent, in our view, the future of movement, with profound physical and emotional benefits. 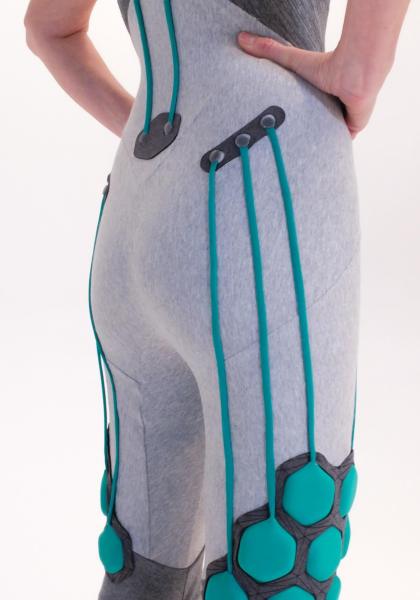 Above: Superflex helps strengthen your muscles so you can move better.