Founded in 2006, Neurala has been building the smarts to enable autonomous machines to be able to function without a human at the helm, covering everything from toys to self-driving cars. Such self-asserting technologies need to be able to inspect their environment, make decisions, navigate obstacles, and return to where it’s supposed to be, and this is where Neurala is aiming to stand out. It currently claims customers across a broad range of applications, and counts U.S. Air Force, Motorola Solutions, Parrot, and Teal Drones among its clients.

The Boston-based startup offers what it calls the Neurala Brains for Bots software development kit (SDK), which developers can request access to. In a nutshell, the SDK gives developers access to out-of-the-box knowledge to integrate into their products, built on a deep learning neural network that is designed to emulate the human brain, and with computer vision capabilities too. All the functions of the SDK can work offline, meaning internet or server access isn’t required. 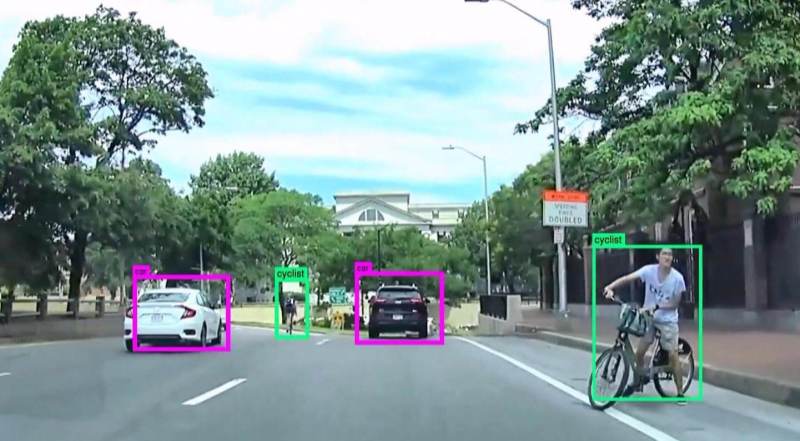 Above: Car on Massachusetts Avenue in Cambridge, Massachusetts, automatically identifies pedestrians, cars, cyclists and trucks in the scene.

Prior to now, Neurala had raised around $2 million in VC funding, and back in 2015 it also received a $250,000 grant from NASA to “commercialize autonomous navigation, object recognition, and obstacle avoidance technology in ground robots and drones.” The NASA connection actually pre-dates that grant, as the team at Neurala worked on the development of the deep learning neural network software that NASA has used to explore the solar system.

Although word quietly got out about its latest funding tranche late last month via an SEC filing, today sees the company officially announce details of the funding — including who stumped up the cash and for what it will be used. Technically, only $13.7 million has been closed as of now, but the company expects to complete the entire round “shortly.”

The fresh cash injection will be used to expand its platform to meet “rapidly increasing customer demand,” according to a company statement, as well as give more intelligence to its bots’ brains.

“The Neurala Brain was designed from the beginning to transform industries,” said Massimiliano “Max” Versace, cofounder and CEO of Neurala. “Bio-inspired brainpower can be built right into drones, cars, toys, cameras, and other devices found in the home so that they can learn, see, and act. This is essential for applications like drones and self-driving cars, where reaction time is critical and where you can’t always get fast network access. It’s also an endearing capability when built into toys that recognize their young owners by sight and give them a smile without communicating with a server.”

As an interesting aside here, Neurala’s CEO is the second cousin of Gianni Versace, the founder of the famous fashion brand he lent his name to. So there you go.

While there are many companies working on machine-learning technology, Neurala has been placing a focus on its ability to work in a self-contained environment sans connectivity, and supports the likes of ARM, Intel, and Nvidia processors.

“Almost every application on earth can benefit from becoming smarter,” added Tim Draper, renowned entrepreneur, investor, and founder of Draper Associates. “Neurala is the only platform that enables products to see and react in their worlds, with fast, local, real-time learning. It’s already driving innovative new intelligent hardware applications even as it makes current ones more efficient, with greater financial feasibility.”

From self-driving taxis and delivery drones, to fleets of warehouse robots and shelf-replenishing bots for supermarkets, 2016 was a notable year for smart machines that act on their own volition and adapt their behavior based on the environment around them. The rise of the machines is truly underway, and Neurala wants to play a pivotal part in the movement.