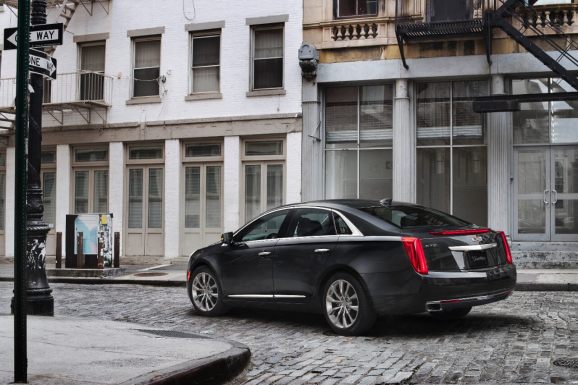 Here’s a sign that the connected car revolution is in full swing.

Starting in February, a beta test in New York City will allow a select few (sign up now!) to rent a Cadillac for $1,500 per month. The Book by Cadillac service will expand to other cities eventually. You use an app to select the model you want, then a concierge delivers the car to your doorstep. You don’t need insurance, and if you have any problems on the road, you can swap out the car at any time. (There’s a limit in that you can only swap 18 times per year.)

I’m picturing someone who picks the sporty CTS-V at first, then switches to the larger XT5 to take a few people to a meeting or on a vacation. Flexibility trumps expense, right?

I’ll let you decide if this all sounds elitist (a typical rental car would run maybe $400 for a month in my area, although you’ll pay much more for that in a city like San Francisco). What I’m seeing is that these programs — there’s a similar one called Audi on Demand — are a sign that using an app on your phone, paying extra for concierge service, and being able to switch to a different car on a whim is at least viable enough for Cadillac to create a platform like this.

And it will eventually be able to incorporate driverless cars. Someone will physically deliver that Cadillac to you now, but at some point in the future, the car will drive itself. Today, no car company can send out an autonomous car, although Tesla does let you back a Model S out of the garage with a click. In the future, though, summoning a driverless car could become as common as jumping in a taxi. The fleet of cars will operate like a taxi service, meeting the driver anywhere, letting you jump in and drive to a meeting. Afterwards, you might switch to an SUV so you can pack up your luggage and head to the cabin for the weekend.

I’m not sure if I like the idea as it stands now, but I do like the idea of flexible driving. The app isn’t available to test yet, but I imagine you can set up a schedule for when and where you want the car to be delivered. In Las Vegas earlier this month, I would have used it. It cost me around $20 per taxi ride or Uber to get around. Ironically, I had a car available to use, but once I parked it for the day, it was much easier to get a ride. If there had been a way to have my own car available at the curb, waiting to go, I would have considered that option.

That said, I do have some questions. If you can switch 18 times per year, could you do that in one month? Since you can cancel at any time, it seems like it would be easy to abuse the privilege. Also, during the beta test, I’m guessing they will determine how long it takes to deliver a car. It won’t be immediate, if you know anything about New York. If there is high demand, you could be waiting a few hours for a swap. It might be easier to take a taxi.

For now, the test will only be in a section of the city, starting in February. There are no mileage restrictions, but if you decide to drive across the United States and back again, good luck getting a swap or a repair in the middle of Iowa. Not even Cadillac can pull that off.