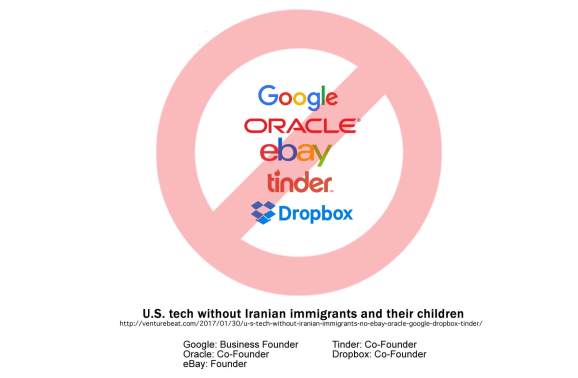 Last year, when we were debating whether or not the U.S. should ramp up its acceptance of Syrian refugees, one image of a tech icon went viral, inspiring social media posts, news coverage, and a Banksy tribute. That image was of Steve Jobs with the caption “Steve Jobs was the son of a Syrian refugee.”

While the image should probably have read “biological son of a Syrian immigrant,” it put a relatable face on the situation and added tangible stakes. Imagining a U.S. without Syrians is easy if you don’t know any Syrians, but imagining a U.S. without Steve Jobs means bearing the loss of Apple and Pixar’s economic, design, technological, and cultural influences. It would be a veritable alternate timeline.

Trump’s new order threatens to cripple immigration from seven countries: Iran, Syria, Iraq, Libya, Yemen, Sudan, and Somalia. So far, no one’s done a good job of expressing the tech and business costs of what it means to lose the best and brightest from those countries. Instead, we get limp statistics, images of strangers suffering, and vague lamentations like “we’re losing our values” or “this will make it harder to hire programmers from abroad.”

Since I’m an Iranian-American and know the community’s accomplishments well, I’d like to paint a brief picture of what the U.S. tech landscape would look like had Iran been stonewalled over the last few decades. This should give you an idea of what’s at stake (the people below were either born in Iran or had Iranian parents).

The list goes on, and Iran is just one of the seven countries Trump is targeting. But it gets worse, because even if you think turning people away from these seven countries is an acceptable loss, there’s a cascading effect.

Talented people in other countries don’t disappear if we reject them. They’ll shrug and move on to the burgeoning tech scenes of Europe and Asia, where they’ll be greeted with easy funding, a low cost of living, fast Internet, vibrant communities, and exotic workspaces. Many American tech startups have even been flocking to these destinations of late. If we limit immigration, we’ll be accelerating Europe and Asia’s tech position while massively sabotaging our own.