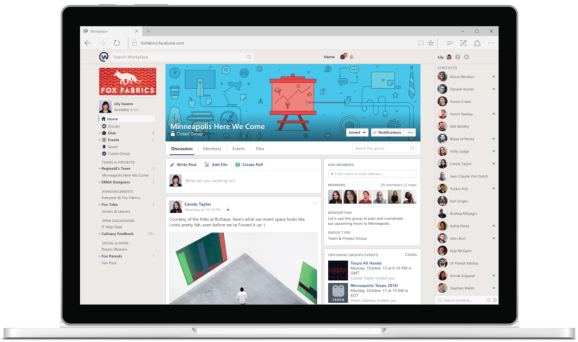 Mobile push notifications about emails and chat messages after you leave work is a reality of modern life, one that most people can uniformly agree sucks. France hates it so much that it passed a law requiring employers to set hours during which employees can ignore work emails.

Part of Workplace by Facebook’s solution may be something called Beach Mode, a feature that reduces the number of notifications that users receive after hours, Monica Adractas, head of Americas for Facebook’s Workplace service, told VentureBeat in an interview today.

Workplace is an internal social network that launched in fall 2016 and includes live video, groups, a chat app, and a News Feed — just like regular Facebook, but for keeping up with your colleagues.

“Yeah, we have features for that: You can go on Beach Mode or Do Not Disturb mode in the product if you wish to cut down on notifications,” Adractas told VentureBeat after speaking onstage at the SaaStr conference at San Francisco’s Bill Graham Civic Auditorium.

“I think we’re testing it, so basically you have these different versions of the product that basically allow you to cut notifications for different groups,” a Facebook spokesperson told VentureBeat immediately after Adractas described the feature.

However, when VentureBeat later emailed the spokesperson to request more details about Beach Mode, a Facebook spokesperson noted that Adractas misspoke and that Beach Mode isn’t actually a feature and isn’t something Facebook is shipping.

Given Facebook’s history of experimentation, Beach Mode may never be a publicly available feature of Workplace.

Other services for the enterprise have also taken steps to reduce the amount of information employees receive after hours. Slack added Do Not Disturb for its users in December 2015.