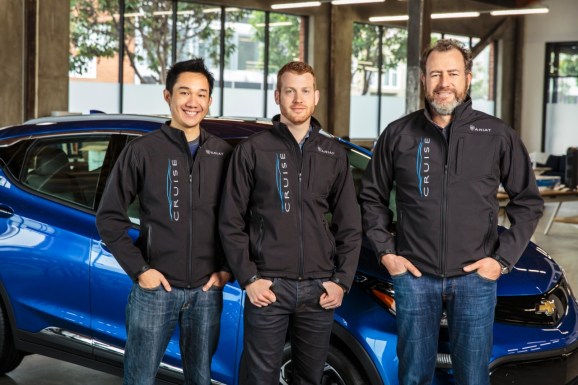 The app is being used by Cruise employees on a test basis to request a ride in an autonomous Bolt EV from their home to the company’s office in San Francisco. The test program was started a few months ago, according to a GM spokesman.

Information about the app was shared by Cruise Automation CEO Kyle Vogt in emailed statement that was released Wednesday along with a new video showing one of its autonomous vehicles successfully navigating the Potrero and Mission neighborhoods in San Francisco. This is the second video that the normally secretive unit, acquired by GM last year for $1 billion, has shared in the past month of its self-driving car exploits.

The video was captured from one of Cruise Automation’s autonomous vehicles (this particular one is named Albatross) during a series of back-to-back test rides, according to Vogt. There was no additional planning involved in rides beyond what is typical, and the video was captured in a single take, he said.

The operator selected a random destination using the Cruise mobile app, pushed a button, and the vehicle started moving. Rides like this occur hundreds of times per day across our test fleets.

The video, posted below, is compressed to show a 23-minute tour that includes pedestrians, cyclists, and at least one car cutting in front of the self-driving vehicle as well as a combination of traffic lights, stop signs, and a construction zone . In other words, a complex environment.

The company’s overall fleet for self-driving cars is growing, according to GM. In October, there were 30 self-driving cars in the company’s fleet. Now there are more than 40 vehicles, which are being testing in San Francisco, Scottsdale, Ariz., and Detroit. In San Francisco, there are 25 autonomous vehicles being tested on public roads, according to GM spokesman Kevin Kelly.

General Motors has been more public and aggressive with its autonomous car ambitions in the past 18 months. The automaker announced a number of new initiatives last year that highlight its interest in self-driving cars and unconventional transportation options popularized by a new wave of startups, including a partnership and $500 million investment in ride-hailing startup Lyft, the creation of an engineering team dedicated to autonomous driving, and its acquisition of Cruise Automation.