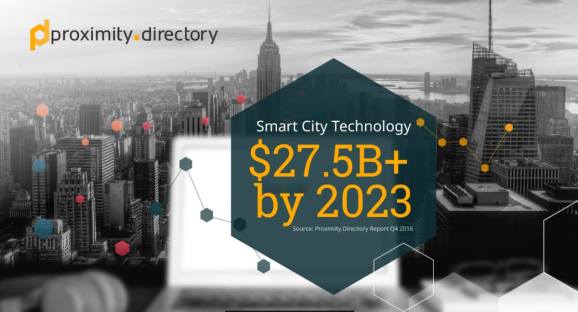 The new Q4 2016 report chronicles the cities that have deployed Proximity Sensors, or sensors that detect things like whether a car is in a parking spot. The report has aggregated data from more than 370 Proximity Solution Providers in over 50 different countries.

“The Q4 2016 proximity.directory Report concluded the deployment of global smart technology projects in urban markets [that are] expected to grow significantly on [an] annualized basis,” said Thomas Walle, cofounder and CEO of Unacast, in a statement. “We are still in the early stages of smart city developments. In 2017, big project announcements will come to life.”

Here’s how cities are getting smart and putting technology to work for them.

The report said Singapore deployed a massive number of sensors and cameras around the city to analyze traffic congestion and crowd density, enabling government and officials to reroute buses at rush hour, averting traffic jams. They are also able to predict how new buildings may affect wind patterns or communication signals.

Barcelona installed wireless light-emitting diode (LED) street lights to reduce energy usage. The city has also deployed a network of ground sensors to regulate irrigation relative to forecasted rainfall estimates and temperature. The sensors adjust the city’s sprinkler system and fountains for efficiency, leading to an increase in water conservation by 25 percent — saving the city $555,000 per year.

New York City has begun implementing a high-speed broadband service for the entire city that will be completed by 2025. Within this area, officials will be able to monitor data on air quality, traffic, and energy consumption.

London is using technology to help tackle congestion and make parking simpler. Government officials have opened up data to startups and projects to take advantage of that data in building their products.

San Francisco has implemented a smart parking system to monitor occupancy and can use this data for a dynamic parking system that adjusts the cost of parking depending on whether spots are occupied or not.