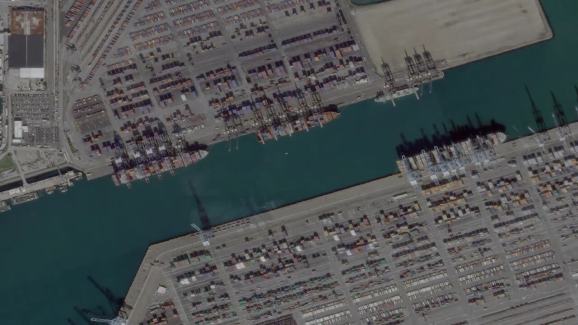 Terra Bella satellite images of the docks at the US port of Long Beach.

A few days ago we heard that Google is selling Terra Bella — the satellite startup it bought for $500 million in 2014 to Planet, Terra Bella’s key competitor.

The deal is a pivotal moment for the earth-observation market — a market that provides all types of industries with strategic intelligence based on satellite data, with many customers in the defense and intelligence space. (Other applications include providing big box stores with data on parking lot fill rates by time or day or giving agriculturalists data on crops and land.)

Yes , Terra Bella (formerly Skybox), one of the biggest SpaceTech “success stories” and the only space-related VC-backed exit of its kind to date, is now being sold.

Under the terms of the deal, Planet will acquire the Terra Bella business, including its SkySat constellation of satellites, and Google will enter into a multi-year contract to purchase Earth-imaging data from Planet. A significant number of Terra Bella’s employees are expected to join Planet. And while the financial terms haven’t been disclosed, it is rumored the deal is about $200-300 million (in other words, quite a bit less than what Google paid for it) and that Google is likely buying a stake in Planet.

Here are the implications on the wider earth-observation (EO) market:

1.  Investor enthusiasm for EO will significantly decline. There were already concerns in the community that the EO satellite space is overdone, and this deal will convince investors that it’s not enough just to pitch a beautiful story on how fleets of satellites will monitor Earth on daily basis. If Skybox, the one and only microsatellite exit, didn’t play out that well, what’s the point of investing in another company making similar claims?

2. The EO market will probably face further consolidation. There are at least 13 startups (more details here) willing to launch their own satellite constellations. Assuming the valuation of these startups will now significantly decline (as Terra Bella is likely selling at a 50 percent discount from its acquisition price), I expect market leaders Digital Globe and Planet will continue to increase their in-orbit capacity, acquiring microsatellite startups. Especially interesting targets might be companies that generate unique data, such as radar or hyperspectral, as they would complement the existing data portfolio’s of Planet and Digital Globe.

3. EO startups will pivot to a more “full-stack” approach. If even Google finds it too expensive to operate its own satellite fleet (the cost is rumored to be one of the reasons for the sale), I expect existing microsatellite startups to provide a set of value-added services together with the straight imagery. So the next breed of EO startups will need to be software-driven, developing analytical products on top of their EO data rather than focusing on hardware. The recent Cape Analytics $14 million funding and Spaceknow $4 million funding support this hypothesis. Perhaps we will see Planet start acquiring data science/computer vision companies just as Digital Globe (Planet’s key competitor right now) did last year: Radiant Group for $140 million and Timbr for an undisclosed amount.

The Terra Bella deal is a remarkable win for Planet, which will significantly strengthen its position and make the San Francisco-based startup one of the key forces in the market, especially taking into account its deal with the National Geospatial Agency, the largest buyer of satellite imagery out there.

But the deal also signals a cool-down for earth observation startups. It will be very difficult to raise funding and enter the market now. However, there still might be interesting investment opportunities, such as imagery analytics startups, and clearer exit scenarios can be outlined, taking into account further market consolidation.