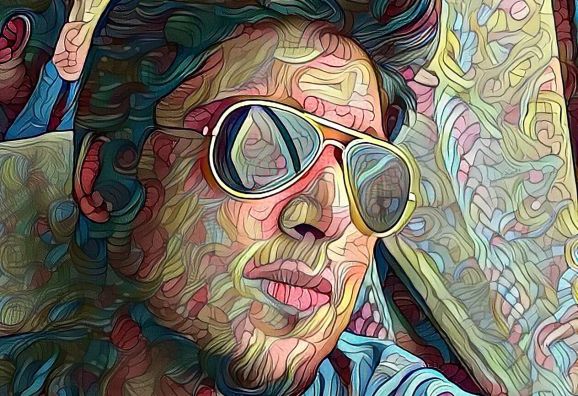 We’ve heard many predictions of how robots will take over the monotonous functions of our daily lives, freeing us to work on highly-skilled or creative tasks. But in fact the opposite may be happening: Some of the easiest tasks to automate turn out to be creative ones, and many of the montonous jobs we’d really like to automate are proving very tricky.

Art. Since the early 2000s, the University of London’s The Painting Fool program has created artwork, much of which has been featured in prominent galleries alongside human-created art. Neural networks such as DeepStyle or Prisma use convolutional neural networks to stylize photos after the work of a specific artist. Logo generation systems like Withoomph, Tailor Brands, and Logojoy, use partially- or fully-automated systems to generate logos based on keywords.

Researchers have also applied these processes to music: Melomics is a system that composes and plays music to match your lifestyle and activities, and IBM has partnered with artists to help compose music with Watson by combining massive musical datasets and their lyrics with sentiment analysis. It appears that natural human creativity is not, in fact, necessary to create beauty.

Science/research. A core basis of science is reproducibility. Companies such as OpenTrons are working to save scientists both time and money by helping them automate pipetting, a monotonous and labor intensive task used in many laboratories. Startups Arcturus and BioRealize enable scientists to remotely run many genetic engineering experiments in parallel, greatly reducing mistakes and lab time. Other startups, such as Emerald Therapeutics and Transcriptic, are hoping to move research to the cloud, using remote robotic systems to perform the experiment itself.

Beyond automating manual lab work, machines are now automating scientific discovery and understanding. Nutonian is a Cornell spinout that creates models on data without being given any prior assumptions. Researchers at Cambridge, Aberystwyth, and Manchester have created a similar autonomous science algorithm that they claim was the first machine to independently discover new scientific knowledge. As the pace of scientific research increases, scientists may increasingly rely on automated systems.

Legal. The practice of law requires many years of studying and understanding laws, cases, and other legal precedence. Recent advances in AI have made the automation of those tasks possible; to date, case law, contract law, and advocacy law have seen the most automation. Startup DoNotPay helps users appeal traffic tickets. ROSS Intelligence augments legal research by using AI to surface relevant legal passages and cases to increase the efficiency and quality of legal research. eBrevia uses AI to extract data from contracts to accelerate diligence, contract analysis, and other related applications.

There is a ceiling, imposed by liability concerns, to how much law can be automated; a startup might expose itself if it advised a client on legal matters, so most companies likely can only research and synthesize information. Because much of the legal industry charges by the hour, it will be interesting to see to what degree lawyers will accept automation and other tools to increase the efficiency of their practice.

Policing and security. The primary function of human physical security teams is to observe and report security incidents; due to the risk of liability to their employers, many human security guards are not allowed to interfere, making their work easy to automate. Security automation to date has focused on augmenting existing security forces, inexpensively amplifying the eyes and ears of security guards beyond what fixed camera systems can cover.

Knightscope and Gamma 2 Robotics build ground-based security robots that act as “force multipliers” to provide deterrence through physical presence; these robots are being deployed at an increasing number of corporate campuses and shopping malls. Another startup, Nightingale Security, is using flying drone robots to help their customers carry out continuous surveillance. In time, robots may replace substantial portions of police and security forces, requiring humans only for resolving violent incidents.

Cleaning. The cleaning robot Roomba was one of the first commercially available robots to everyday consumers in 2002. Almost 15 years later, there has not been any real innovation in terms of cleaning robots that has seen commercial success. One company called Intellibot creates a large-scale automated floor cleaner called TASKI that enjoys only limited distribution. Another large-scale floor cleaner, the RS26, comes from a collaboration of Brain Corp and International Cleaning Equipment.

Beyond floor cleaning, robots are being employed in complex cleaning processes too dangerous for humans to perform manually. The startup Ecoppia is using robots to clean solar panels, and Kurion has a division that makes robots to clean up nuclear facilities, including Fukushima.

Clothing and textiles. Textile manufacturing, one of the first industries to be automated, remains incredibly hard to automate completely. Robots work best when manipulating solid objects, but textiles shear, stretch, and compress, making them difficult for robots to handle. Machines today can dye and cut fabrics and embroider intricate designs, but nimble human fingers are still better for assembling that fabric, sewing on buttons, pockets, and adding on delicate finishing touches such as lace and pleats.

Few companies have made significant headway in advanced sewing. Softwear Automation is one such company which uses high speed cameras to track a textile as it flexes and bends, allowing the robot to make micro-adjustments as it sews a seam together neatly. Nike is using automation to bypass the traditional shoe assembly process altogether with its FLYKNIT line of shoes, the top portion of which is knit from one continuous thread instead of being assembled from multiple pieces.

Automation has struggled with clothing care almost as much as it has with sewing. Although machines can wash and dry clothing, the process of loading, unloading, and folding remains repetitive and laborious with few reasonable automated alternatives. Startups Laundroid and Foldimate have developed laundry folding robots, although their solutions are large desktop or closet-sized machines with limited capacity.

Farming. Automating the harvesting of crops that are today picked by hand has so far been hard because many of these crops can be damaged easily and computers have had trouble with visual recognition of the fruit or produce they are trying to pick. Despite these challenges, there are many companies working towards fully automating a variety of agricultural tasks.

Harvest Automation has created a robot called the HV-100 that can virtually automate the entire lifecycle of a plant. There are also a series of startups working on weeding and thinning robots.  Among these are Naio Technologies, which has created robots for vineyard, small scale, and large scale weeding.

In the fruit picking space, companies such as FFRobotics, Abundant Robotics, and Vision Robotics have worked on solutions for fruit picking. While none of their products are widespread yet, their efforts are helping pave the way towards a more automated world. Abundant Robotics, for instance, is avoiding many of the difficulties of robotic grippers and instead using a suction device to pick fruit.

Several themes emerged from this overview that enable us to predict what’s next for the robotics industry. Today, robotics have made significant headway into automating repetitive tasks requiring little finesse and tolerant of blunt solutions. Tasks that require processing large amounts of data and information can also be augmented by automation. On the other hand, tasks that require complicated manipulation of materials are still difficult to automate and need more skilled assistance, as does the deeper decisionmaking and synthesis of information that robotics help us surface.

As much as robotics have transformed many major industries, the need for humans to complete the final finishing steps, as diminishing as they may be, makes it abundantly clear that total robotic world domination still remains beyond our horizon.

Tiffine Wang is Innovation and Partnerships Manager at Singtel Innov8.

Freddy Dopfel is an Associate at Samsung Ventures.

Ryan Morgan is an Associate at DFJ Growth.