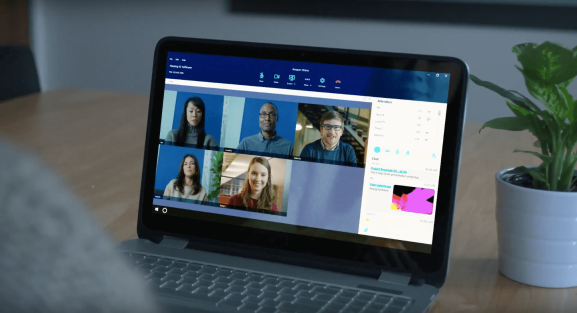 Cloud infrastructure provider Amazon Web Services (AWS) today announced the launch of Amazon Chime, a new service that organizations can use for voice and video calls and instant messaging.

It might well pose a challenge to enterprise-oriented services like Cisco WebEx and LogMeIn’s GoToMeeting, but Amazon Chime seems to be a more direct competitor to Skype for Business from Microsoft, which fields the Azure public cloud that goes up directly against AWS. Hangouts, which Google pushes to organizations through G Suite, might also be threatened by the launch of Amazon Chime. Google also has a public cloud. Smaller companies like Blue Jeans, Dialpad, Slack, and Zoom might also be affected.

The service is accessible in Windows, Mac, Android, and iOS apps, according to a statement. Joining a call doesn’t require typing in a PIN number, Amazon said.

This is another example of AWS getting more directly into software as a service (SaaS), as opposed to its roots of Infrastructure as a Service (IaaS). It follows AWS’ introductions of QuickSight, a business intelligence service, and WorkMail, an email and calendar service. And it’s another example of AWS competing with the organizations that use its core services — Zoom, for one, happens to be an AWS customer.

Amazon Chime offers a free edition. A Plus Edition with user management and Active Directory (AD) support and 1GB of message retention is available for $2.50 per user per month. And a Pro Edition, which costs $15 per user per month, includes screen sharing and video that scales out to as many as 100 users, along with unlimited VoIP service. An Outlook plugin is available for all three tiers.