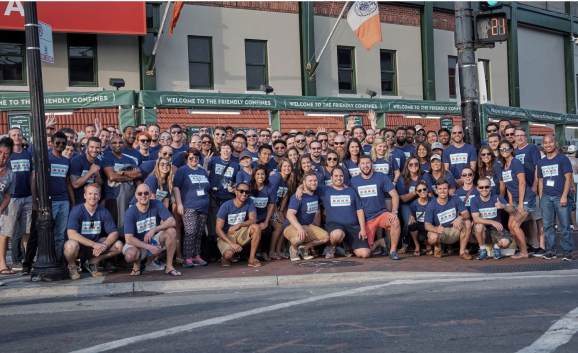 The employees of Distil Networks in 2016

Dear President Trump: My name is Rami Essaid, and I’m cofounder and CEO of a cybersecurity company. We’re an American firm that helps hundreds of businesses, like Verizon, StubHub, and Glassdoor, block attacks on their websites. We’ve received $65 million in funding from some of the top venture capital firms in the country. We have proudly created more than 200 jobs, most in the United States.

And I’m a Syrian-born immigrant.

Like your German grandfather Friedrich and countless other newcomers, my father came to the United States in search of a better life for his family. In my dad’s case, the desire was particularly acute: The family was looking to escape the targeted harassment and oppression of the authoritarian regime of Hafez al-Assad, Syria’s president from 1971 to 2000 and father of current strongman Bashar al-Assad. So we moved to the United States in 1991, when I was in the second grade.

We fell on hard times. Though well educated, with an engineering degree, my father had trouble finding good work and, for several years, we lived on the edge of poverty. But he persevered and by the time I reached high school, my dad was a successful environmental engineer and supporting a middle-class lifestyle for my mother, my two younger sisters, and me.

I inherited my father’s ambition, determination, and predilection for risk-taking. I dropped out of college in 2004 and started a retail cell phone company. After that, I went into the corporate world for a while but couldn’t shake my entrepreneurial urge to start and build a business. With the help of two lifelong friends, I launched cybersecurity company Distil Networks in 2011. We’ve been doubling our revenue every year since.

I tell you all this because you’re a man who respects success. And I thought it was important you know my backstory before I speak to you, businessman to businessman, about the effects of your ban on citizens of seven Muslim-majority countries from entering the U.S. for 90 days and all refugees for 120 days – with Syrian refugees barred indefinitely.

This action and the resulting confusion and uncertainty – even as the courts weigh in – are hurting my company’s ability to operate.

Though I am a proud U.S. citizen, an American, and have renounced my Syrian citizenship, the ban has created so much turmoil that our investors are now concerned about me traveling abroad and have told me to stay home until this is sorted out. So I’ve had to cancel some important meetings.

We sometimes rely on candidates from abroad to fill key positions when we can’t find the right talent in the U.S., and in recent days, we have seen several strong candidates withdraw.

Beyond the effects on my company, I wonder about a ripple effect on cybersecurity generally. The cybersecurity world is not local; you must collaborate internationally to defend against attacks. The nationalistic/isolationist approach that the travel ban reflects could cause the rest of the world to stop working with us. That would be bad for cybersecurity. You cannot build a wall to keep out cyber criminals, and without international cooperation, America will be less secure.

Something else about the ban hurts me even more than the business ramifications: My elderly grandmother, still in Syria, now cannot visit my family. My uncle who I recently sponsored and helped migrate to the United States is now separated from his wife and child.

I watched in shock and horror during the weekend your executive order was put into effect and sparked chaos in airports. How could this be happening? Green card holders – resident, legal aliens on their legal path to becoming U.S. citizens, just like my family was so many years ago – were being barred from re-entering the country if they happened to be traveling, say, to attend a funeral, wedding, or a business meeting?

Though it has been reported that your administration has since eased restrictions on green card holders, confusion prevails, as does the chilling effect on my business operations.

Like so many Americans, I ask why these seven countries – Syria, Iraq, Iran, Yemen, Sudan, Somalia, and Libya – are being singled out when nationals of those countries haven’t killed a single person on U.S. soil between 1975 and 2015.

Why are Syrian refugees – women and children trying to escape a dictator even more brutal than the one my father left, and already subjected to a rigorous vetting process – barred indefinitely?

Mr. President, I urge you to reconsider this unfair, unnecessary, and harmful travel ban. Please think of people like my father who want nothing more than to assimilate into this great country and provide a better life for their family. And think of immigrants like me, who are creating jobs here at home and consider themselves red-blooded Americans who, just like you, want nothing more than to make this country great.

Rami Essaid is CEO and cofounder of Distil Networks, a bot detection and mitigation company.